Chris DeHaemer, who’s behind these recommendations (although the pitch was presented by Dave Robers), believes that he has found a way to make a potential 9,910% in positive returns from the next generation of “mobile spatial computers.”

Therefore, in this article, I will walk you through the pitch highlighting the main points he raised as I unveil his stock picks.

What is Chris DeHaemer’s Spatial Computing? (The Pitch)

Chris DeHaemer’s Spatial Computing is a pitch by Dave Roberts, the publisher of the Bull and Bust Report, which focuses on a new technology he refers to as “Spatial Computing.” 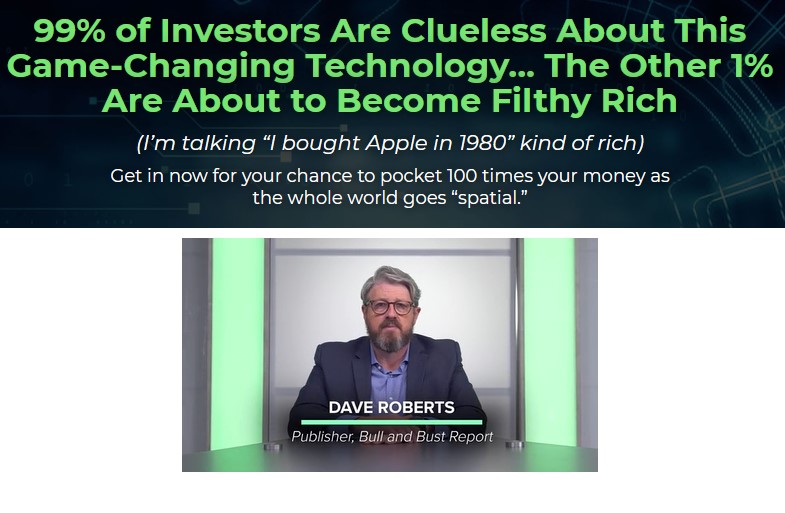 In his presentation, Dave builds it up as kind of a big deal, even comparing investing in it now to getting in on Apple back in 1976 when it was merely a startup in a garage.

He says that key players in tech are going all-in on this technology too:

“Apple chief executive Tim Cook calls it ‘big and profound,’ saying, ‘This is one of those huge things that we’ll look back at and marvel at the start of it.’

Jeff Bezos is betting his own money that this technology will completely revolutionize the e-commerce industry.

The world’s biggest tech companies… Facebook, Amazon, Microsoft, Apple, Google and others… have already invested tens of billions of dollars in this technology.

They’ve filed over 50,000 patents related to this new technology… and they are just getting started…

That’s because this technology is set to generate a massive $350 billion in new revenues in a few short years.”

And then gets to some of its applications, saying:

“This technology allows doctors to practice complex surgeries before they ever pick up a knife. And once they DO begin to cut, this technology guides surgeons like a sophisticated missile guidance system… so you never have to worry about potentially deadly medical errors.

Oil and gas companies are using this technology to plan and build giant offshore oil rigs. This technology can predict and prevent dangerous mechanical failures before they happen. It’s already saving millions of dollars and countless lives around the world.

Car manufacturers are using this technology to speed up design times, boost performance, and test-drive cars before they are built.

This technology is also already guiding drivers in real time and warning them of potentially deadly hazards, potentially savings millions of lives and a fortune in insurance premiums.”

So, what technology is he talking about here?

While Dave refers to it as “Spatial Computing,” the more common term for it is Augmented Reality. He is right when he says that it changes the way you interact with everything.

Augmented Reality is undoubtedly one of the biggest tech trends today. It lets you see the real-life environment right in front of you with digital augmentation overlaid on it. In the presentation, Dave gives the example of putting a virtual beetle on his desk and the popular game, Pokémon Go.

Rather than urge you to invest in Apple, Google, or some other big company working on Augmented Reality tech, Chris wants you to go for smaller players. He has identified a few that Dave hints at in the presentation.

“Chris tells you all about the radar sensor company that makes spatial computing applications possible.

It scans the physical world around you and maps it… so your virtual sofa ends up on the floor in your living room and not suspended from the ceiling!

Key tech players like Apple rely on this company’s sensors. As 5G takes off and iPhones add more radar sensors… this company could deliver 10X gains in short order.

In this report, Chris also tells you about a second play… a tiny software company that creates spatial shopping apps for the world’s largest retailers. We’re talking about an $8.8 billion market here.

As more and more retailers go spatial, this company is sitting in the sweet spot.”

The first one was a bit tough to decipher because the clues are not clear enough. The iPhone 12 has augmented reality but Apple doesn’t rely on one supplier for its VCSEL components which makes it difficult to know what company he was referring to. Possible candidates are II-VI (Nasdaq: IIVI) and Lumentum (Nasdaq: LITE). Unfortunately, I couldn’t quite nail the “tiny software company.”

There is a report about these companies called How to Make a Killing on Spatial Computing’s ‘Killer Apps.’

“This report gives you the inside scoop on the fast-growing spatial computing healthcare market, including a company about to launch a next-generation spatial computer — one designed specifically for the $117 billion first responder market.

This company is already a leader in spatial computing. In fact, it’s been creating spatial computers for the defense and manufacturing industries for decades.

And it’s partnered with one of the biggest names in tech to launch this newest spatial computer.

Once it hits the market, Chris expects its stock to skyrocket.

But that’s just the beginning. Because remember, Chris will also tell you about the tiny company that’s invented a new spatial computer to aid in spinal surgery.

Surgeons using this new spatial computer are 98.9% accurate at placing screws. The last startup that revolutionized surgery like this was Intuitive Surgical.

That stock delivered an astonishing 5,650% return to early-in investors.”

He’s written a report about it titled How to Make Colossal Gains on the Spatial Healthcare Revolution in which he provides the name and ticker symbol of the company.

And there is another spatial computing company he is teasing that develops manufacturing tools. He wrote a report about it called The Rise of the Digital Twin: Cashing in on the $127 Billion Business Revolution.

You get free copies of each of the three reports when you sign up for a newsletter called The Bull and Bust Report.

Who is Chris DeHaemer?

Chris DeHaemer is an editor, publisher, and financial analyst who works at Angel Publishing. Before he started working for them, he was at Agora Publishing for 15 years.

Chris travels the world researching investment ideas before he recommends them. He claims to have flown all over the world to investigate ideas for his readers.

Most of his research centers on natural resources thus he is going a different route by talking about investing in augmented reality.

What is the Bull and Bust Report? (The Newsletter)

Bull and Bust Report is a newsletter that is published by Angel Publishing and headed up by Chris DeHaemer. Dave did the presentation to pitch it to prospective members with the promise of delivering the best recommendations in the technology sector.

When you sign up for it, you’ll receive free copies of the aforementioned reports as well as:

How much do you pay to join Bull and Bust Report?

Does Bull and Bust Report have a Refund Policy?

It comes with a six-month money-back guarantee.

Chris DeHaemer’s Spatial Computing pitch is about investing in companies in the augmented reality space. In the presentation, Dave (the publisher) tells that it is the next big technology and he expects it to be as lucrative as investing in Apple when it was a startup in a garage.

Augmented Reality is still a fledgling technology and its most widespread use was when Pokémon Go was popular all those years ago when it made billions. Since then, there has been progress, albeit quite slow. Companies like Apple and Google appear to be taking the lead here because they can afford to throw R&D money at something that doesn’t have to pay off instantly.

But Chris doesn’t recommend the big guns and, instead, prefers to go with small pick and shovel companies hoping that they will grow exponentially once AR takes off. However, the issue with investing in small companies is that they inherently come with greater risk. Therefore, if you choose to go with them, bear that in mind.