Welcome to my review of Sector Focus.

Chris Rowe of True Market Insiders believes that his “Sector Hunter” trading system can improve your chances of bagging returns by pointing you to the best sectors while helping you to avoid the “bad apples.”

He distrusts broad market indices as a means of analyzing investments and opts for a sector-focused approach.

Therefore, in this article, I will be walking you through how Chris picks his trades as well as what you can expect if you subscribe to Sector Focus. Keep reading to learn more.

What is Sector Focus?

Sector Focus is an investment newsletter that is published each month by Chris Rowe via True Market Insiders. 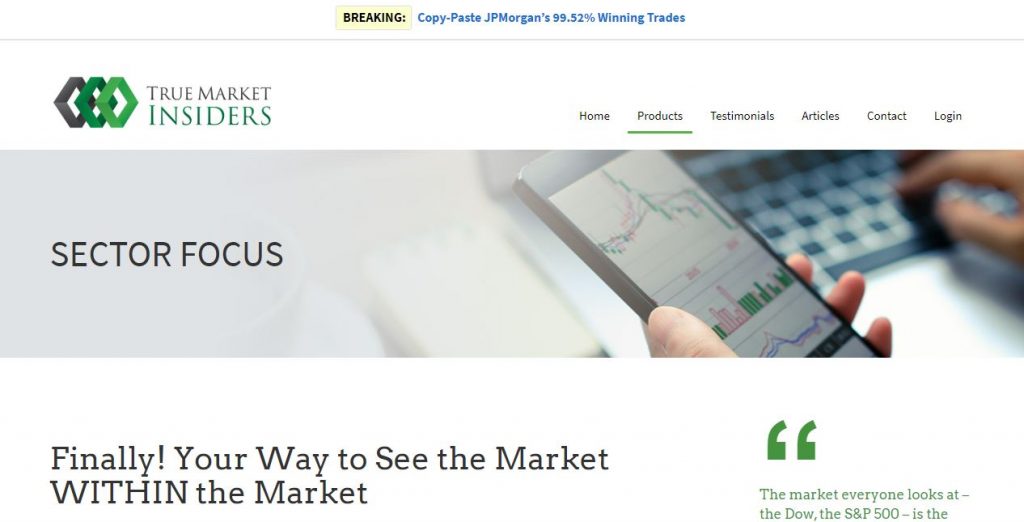 Rowe’s investment strategy is based on Sector Hunter, which uses an algorithm to detect institutional buying and selling. Based on his findings, he publishes his sector and general market analysis every second Monday of each month.

His goal is to find strong sectors to improve the chances of earning profits from his trades. Consequently, he avoids weak sectors whose chances of generating losses are higher.

In his general market analysis, he talks about how different financial markets affect each other.

Why Chris focuses on sectors rather than the broad market

Sector Focus, as the name suggests, concentrates on sectors and subsectors rather than the broad market. Chris believes that this is a more accurate way to analyze the market and find the best investment opportunities.

He argues that most major financial networks and sites only focus on broad market indices like the S&P 500 and Dow Jones Industrial Average (DJIA or the Dow) because it makes their work easier. He says:

“Do you monitor all the financial networks and financial sites? Even these media know that most investors don’t have the attention span for deep, thorough analysis. So they keep it simple.”

He reasons that they do that to keep the attention spans of their readers and audiences rather than correctly analyze the market. Therefore, they end up producing inaccurate depictions of how things are.

He distrusts the Dow because he believes it is disproportionately price-weighted and only has 30 stocks.

He thinks that monitoring the S&P 500 is slightly better than the DJIA although it is still not a good way to track the market because:

His solution is to focus on specific sectors because it enables him and his followers to invest in the right sectors. With his approach, they know how each is performing without distorting their analysis with inadequate or irrelevant data.

To reinforce this analogy, he quotes a study conducted by Dorsey Wright and Associates that showed that the average differential between the best and worst-performing sectors is usually quite significant.

This means that sectors behave differently and you will be rewarded if you concentrate your investments on the better-performing ones.

The study goes a step further and addresses sub-sectors. It demonstrates that with sub-sectors, the differences are even greater between the winners and losers.

Going by the principle that you should invest in winning sectors to increase the probability of making a profit, Chris Rowe starts by going for major sectors:

“I focus on opportunities by going way beyond the broad market averages – I identify the ‘Major Sectors’ with the greatest strength relative to the overall market (sectors that go up by more and down by less than the stock market as a whole).”

Then within the winning sectors, he separates the sub-sectors into good ones and the duds:

“Then I identify the strongest ‘Sub-Sectors’ within each of those …

Then I narrow it down to ‘Narrow Industry Groups’…

And, finally, I identify individual companies and ETFs with the most explosive upside.”

And that’s how he finds the companies he recommends to his subscribers.

Who is Chris Rowe?

Chris Rowe is a market analyst and a former broker and money manager. He has more than 20 years of experience working on Wall Street.

He joined the financial services industry in 1995 right out of high school. He held a couple of high-ranking positions in investment banks and money management firms where he served high net worth individuals.

Most of what he did was analyze and manage investment portfolios of public companies, derivatives, commodities, private securities, and debt securities.

He quit Wall Street and started publishing financial newsletters. He co-founded Tycoon Publishing LLC which published its research for the benefit of retail investors.

He is the CIO of Rowe Wealth Management and the non-executive chairman of True Market Insiders. Both publish advisory services in the same way as InvestorPlace and Empire Financial Research.

What you get when you subscribe to Sector Focus?

Chris analyzes the markets and sends two recommendations to his readers at least twice a month. He does so more often if opportunities arise.

He also sends a video called Featured Sector of the Month in which he tackles one specific sector each month. He demonstrates how to invest in the right ETF to make money from it.

He discusses various charts of general market averages and reveals the types of equities (mid-cap growth, large-cap value, etc.) that are doing better.

You also gain access to previous archived articles and videos.

You get one year of Sector Focus for $168. It then auto-renews for the same amount.

There is a 30-day money-back guarantee (no questions asked).

Chris Rowe distrusts commonly used broad market indices because he thinks that they are not good representations of the state of the market. He believes that different sectors (and subsectors) of the economy behave differently, something that the broad market approach ignores.

This goes against the common belief that indices like the Dow and the S&P are accurate depictions of how the market looks like.

He believes that you should invest more money in the best-performing sectors to give yourself a higher chance of bagging returns and at the same time avoid the losers to minimize your chances of losses. The Sector Focus premium service is based on this.