The Roadmap to Recovery Event was hosted by journalist Lauren Sivan where she interviewed two investment gurus, Louis Navellier and Matt McCall, to talk about investing in the stock market post-pandemic.

It is not the typical teaser presentation where they talk up some company that they expect to do well or an investment strategy that will beat the market. It is about a collection of stock picks that they arrived at that they want to share with you through a subscription service.

In this review, I walk you through it, highlighting the main talking points. I hope you get something from it and make a better decision regarding their proposition.

What is Roadmap to Recovery? (The Pitch)

The presentation starts with the host revisiting a previous special broadcast that featured the two gurus where they predicted where the markets would head in 2021 under a Biden presidency. She reveals that they have done quite well, outperforming the markets 11 times. 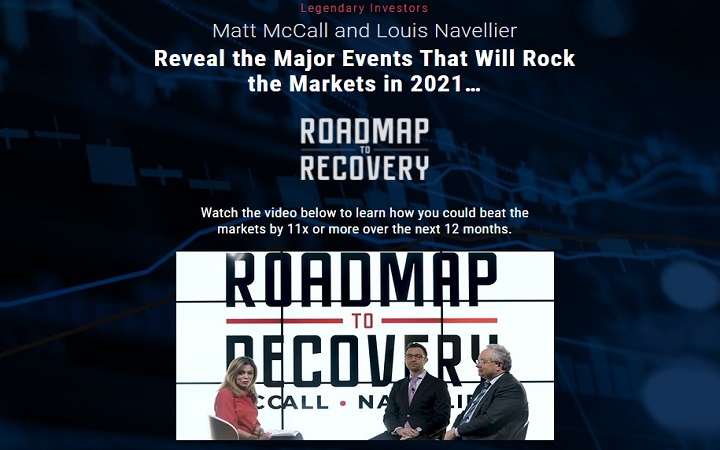 Here is how she puts it:

“A few months ago, I sat down with legendary stock pickers Louis Navellier and Matt McCall.

They told me, and the thousands of other people who tuned into that special broadcast, where the markets would head in 2021 and what we could expect under a Biden presidency.

But more importantly, they handpicked a small group of stocks they thought would beat the markets by 300%.

So, how did they do?

Well… Matt and Louis outperformed the markets by nearly 11X, in under two months.”

She says that you can check the veracity of those claims by visiting the “Disclosures and Disclaimers page” of the InvestorPlace website.

This sets the tone for what much of the presentation is about: showing us that Matt and Louis have outperformed the market and nearly every other investment analyst out there with their stock picks.

But this presentation is also about the future. Matt says that they are expecting an economic boom in the next few months. Here is how he puts it…

But Louis and I believe we’re about to witness one of the biggest economic booms in U.S. history.

And it’s all thanks to three major events colliding at the same time.”

So, they expect an economic boom based on two events. What are these events?

The first event is the coronavirus getting eliminated and the economy doing well as a result. They talk about how important the vaccine is to this and acknowledge that a mass rollout is going to help eradicate the virus. They argue that as more people get vaccinated, the economy will reopen, people who had lost jobs will be re-employed, and they will spend more money. He likens it to how the economy bounced back after World War II.

“Yeah, we’ve never seen anything like this in our lives.

And according to the FDIC, which is the organization responsible for insuring our checking and savings accounts, more than $2 trillion has been stockpiled into individual accounts at U.S. banks”

They believe that some of this money belongs to people who decided to sell off their holdings when the markets crashed at the beginning of the pandemic (to sit it out) and the rest is from the stimulus plan that was signed by the president in March 2021. Louis states that with so much money lying around, people’s purchasing power will increase and this will be great for the economy.

“Technologies like 5G, AI and blockchain are more important now than ever.

I believe these technologies are all at an inflection point.

With COVID in the rearview mirror, increasing the reach and capabilities of these technologies will become the top priority for the world’s most powerful governments.

An opportunity that’s already gaining a lot of momentum and could hand those who get positioned now a lot of money.”

He expects some companies to do well as a result and he wants you to pay attention to those companies.

Louis then comes in and says that they have analyzed over 5,000 stocks and uncovered investing themes that they think will have the most immediate upside for the remainder of the year. He says that after combining their approaches, as they did in Power Portfolio 2021, they have agreed on the stocks they think you should consider investing in.

They whittled their list down to 8 hypergrowth stocks that constitute “The Great American Reopening.” These are the stocks that they believe will be the biggest winners in the market.

So, how do you get access to these stock picks? By signing up for Power Portfolio Reloaded, which we will take a look at in a bit.

Who are Louis Navellier and Matt McCall?

Both Louis and Matt are investment gurus who are part of the editorial team at InvestorPlace, an independent investment research firm that publishes newsletters.

He claims that his computer models have enabled him to uncover the biggest winners of the past few decades, including Apple (APPL), Oracle (ORCL), Amazon (AMZN), and Nvidia (NVDA). In summary, he predicts stock moves using his predictive quantitative-based models.

He offers investment advice to his followers through advisory services like Power Options.

Matt McCall is the founder of a money management firm called Penn Financial Group that serves institutional and retail investors.

He has published a book called The Next Great Bull market that, like Navellier’s models, has been forecasting many megatrends in the market today. For example, he says that it forecasted the electric vehicle boom and the rise of Bitcoin.

In summary, Matt paints himself as an analyst who understands trends and uses those insights to find dozens of stocks that have the potential to go up significantly. He publishes advisory services targeting retail investors, including Ultimate Crypto and Early Stage Investor.

What is Power Portfolio Reloaded? (The Newsletter)

Power Portfolio Reloaded is a joint initiative by Louis Navellier and Matt McCall whereby they combine their investment approaches to pick a group of stocks that they agree is likely to do well. They create a model portfolio at the beginning of the year or whenever there’s an event that they think will impact the market and create breakaway investment opportunities. For example, they had one that comprised opportunities emerging from a new presidency a few months back.

They add to the list when they identify a new stock that they think is positioned for a breakout within one of their hypergrowth trends.

When you become a member, you receive:

How much do you pay to join Power Portfolio?

There are no refunds once you sign up for the service.

Closing Remarks on Roadmap to Recovery

One thing that comes out of the presentation is that Louis Navellier and Matt McCall are bullish about the market. They claim to have independently concluded this; Matt through his “big trend”/”top down” approach where he visits companies, attends conferences, and talks to industry players, and Louis through his “bottom up” approach where he runs computer models that crunch millions of data points.

After coming together to see where their research overlaps, they want to package it for their readers in what they call “Power Portfolio.” This is not the first time they are running such an initiative as we’ve seen them do it before and they seem to be renewing interest by putting out this new presentation.

Those stocks they picked are in the technology industry because Matt goes on a tangent praising the impact of the industry on the economy and why he sees it driving the Roaring 2020s.