Banyan Hill recently sent me an email requesting me to check out Paul Mampilly’s Remade in America presentation.

Paul implies that there will be an industrial revolution as manufacturing is brought back to Middle America thanks to one tech innovation.

In this article, I will walk you through the presentation and uncover the company he is teasing in his pitch.

What is Remade in America? (The Pitch)

In the Remade in America presentation, Paul Mampilly floats the idea that America is undergoing an industrial revival. He says that the country is about to go back to its golden age of the 1950s and 1960’s when the middle class expanded thanks in no small part to local manufacturing. 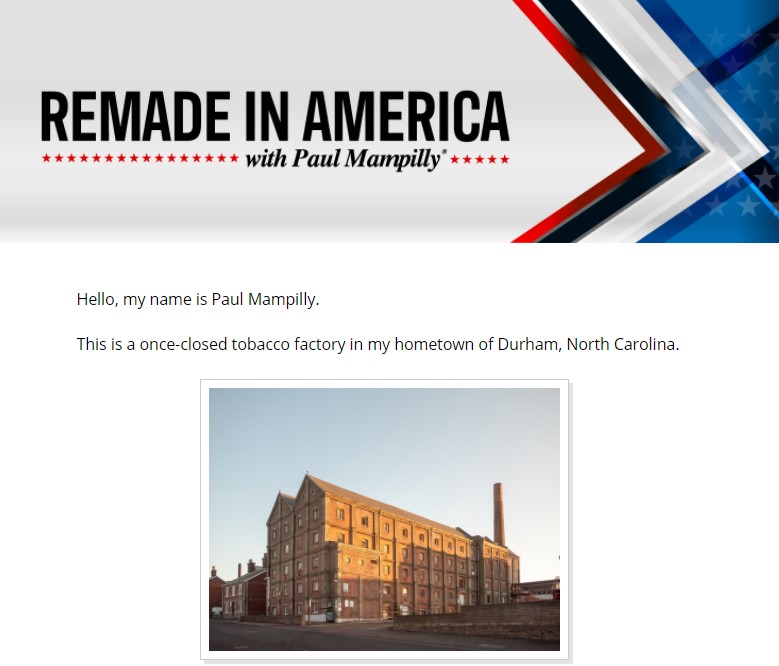 He says that increased industrial output will be facilitated by a technology that will replace the assembly line – which he credits for the success the country achieved in the previous century.

That technology is 3D printing.

He has a few things to say about 3D printing but these sentences caught my eye:

“Nearly four decades after its invention…

Unleashing a new American age of wealth, prosperity and dominance. All in the next decade.

You have a shot to be on the ground floor as this industry skyrockets from a $65 billion niche to a $100 trillion mega-industry, starting now.”

So he is expecting the technology to usher in what will be like an industrial revolution. He says that it can be used to manufacture anything from food, nuclear reactor cores, yachts, buildings, rockets, engines, nano-satellites, personalized medications, spinal cord implants, to organ tissues for hearts, livers, and lungs.

He wants you to invest in a 3D company to reap the rewards of a possible revolution, were it to happen.

Paul has identified one small company that he thinks is going to benefit from the mass adoption of 3D printing. He describes it as follows in the pitch (verbatim):

“One company, based here in Durham, is leading the 3D printing race…

Its set to surge for historic gains similar to Ford in its heyday.

Only its center isn’t Detroit…

It’s right here in the ‘forgotten’ town of Durham.

“They’re raising more than $1 billion in funding each year.

This company itself is creating a 3D industrial machine that prints 4 million parts a month.

It’s being called the ‘frontrunner of the 21st century manufacturing revolution.’

Forbes says they are ‘building the factory of the future.’”

This is the push-button factory for everyone and everything.

It tests, prints, and rolls out custom products within 24 hours.”

He says that it is likely to continue doing well because its 3D printing technology integrates artificial intelligence and machine learning, which will enhance quality control. He explains that this bit is important because manufacturers no longer have to use trial and error and thus will minimize wastage.

As he was releasing the pitch, this company had a market cap of $3 billion.

He has written a dossier titled ReMade in America: The No. 1 Tech Stock for America’s New Industrial Revolution that has the name of the company he is teasing as well as its stock symbol. He is giving away free copies to people who subscribe to his newsletter, Profits Unlimited, which we will take a look at later.

As for the company he is talking about, I narrowed down the culprits to either 3D Systems (NYSE: DDD) or Proto Labs (NYSE: PRLB).

At first, I thought he was referring to 3D Systems because last year, he was teasing it in one of his pitches. Here is a brief overview:

It is a manufacturing company that manufactures and sells 3D Printers, 3D Printing materials, 3D Scanners, and runs a printing service. It was founded in California in 1986 but has its headquarters in South Carolina.

I am unsure as to whether it is the company he is talking about because it doesn’t have a facility in Durham, NC, yet and its market cap is over $4 billion as I write this.

Proto Labs has a stronger case because it matches that Forbes quote he mentions there that is from a 2014 article about it building the factory of the future. The title of that article was “How Proto Labs is Building The Factory of The Future” and that matches perfectly.

Proto Labs has its headquarters in Mapple Plain, MN, and, according to Wikipedia:

It isn’t based in Durham but has a facility in Morrisville, NC, and that’s probably the one he is talking about. Its market capitalization is also above $4 billion as I write this.

Paul Mampilly is one of the investment gurus at Banyan Hill Publishing. He edits a host of premium advisory services.

He moved to the USA from India at the age of 18 and pursued a career in finance. He worked for big Wall Street firms like ING and Deutsche Bank before he became a hedge fund manager.

He claims to have quit his job as a hedge fund manager at the age of 45 to start giving investment advice to individual investors. That is how he landed a job at Banyan Hill where he works now.

What is Profits Unlimited? (The Newsletter)

Profits Unlimited is Paul Mampilly’s flagship newsletter. You can read my more detailed review of the newsletter, which I have linked to.

If you are short of time, however, here is what the service entails in a nutshell:

Paul claims to publish investment recommendations drawn from the kind of research he used to do for his wealthy clients during his hedge fund days.

When you become a member, he sends you monthly recommendations, weekly updates, special alerts, access to his encrypted website (and model portfolio), and copies of his special reports.

If you join through the Remade in America presentation, you are also entitled to a couple of free special reports. The first one is the aforementioned one about 3D printing and the rest include:

They each have a list of stocks he thinks you ought to consider for investment.

How much do you pay to join Profits Unlimited?

It has a one-year money-back guarantee.

Closing Remarks on Remade in America

In de-teasing Remade In America, I came to the unusual conclusion that Paul Mampilly may be talking about either 3D Systems (DDD) or Proto Labs (PRLB). I am highlighting both companies because there wasn’t a perfect match and that probably has to do with the pitch being outdated.

Newsletter gurus re-publish old pitches, adjusting some bits and some may be left inaccurate. For example, there isn’t a $3 billion 3D company based in Durham, NC as of writing this and the closest are the two I just mentioned.

Proto Labs edges it for me because it matches the Forbes quote and I think he may have been talking about it when it was worth $3 billion in mid-2020.

That being said, both companies are major players in the 3D printing business and are worth looking into as you analyze the industry if you are interested in diversifying into that sub-sector.