In Ray Blanco’s new pitch about “The Metaverse,” he says that investors should forget about electric vehicles and focus on the trillion-dollar tech revolution.

“Forget about electric vehicles. Artificial intelligence. 5G… This technology will be far greater than all of these combined,” he says. He also believes that the world’s top tech billionaires are already jumping on board and you should not miss out on it.

In this article, I walk you through Ray Blanco’s presentation as we find out what technological trend he is so excited about and his number one recommendation.

What is Ray Blanco’s The Metaverse?

Ray Blanco is the latest in a series of investment gurus who claim to have found a “trillion-dollar megatrend” in the technology sector. Others include Jeff Brown, Eric Fry, and Ian King.

He says that an army of Silicon Valley geeks, entrepreneurs, and engineers have been following a little-known tech “blueprint” for 29 years and used it to create an estimated $393 billion. 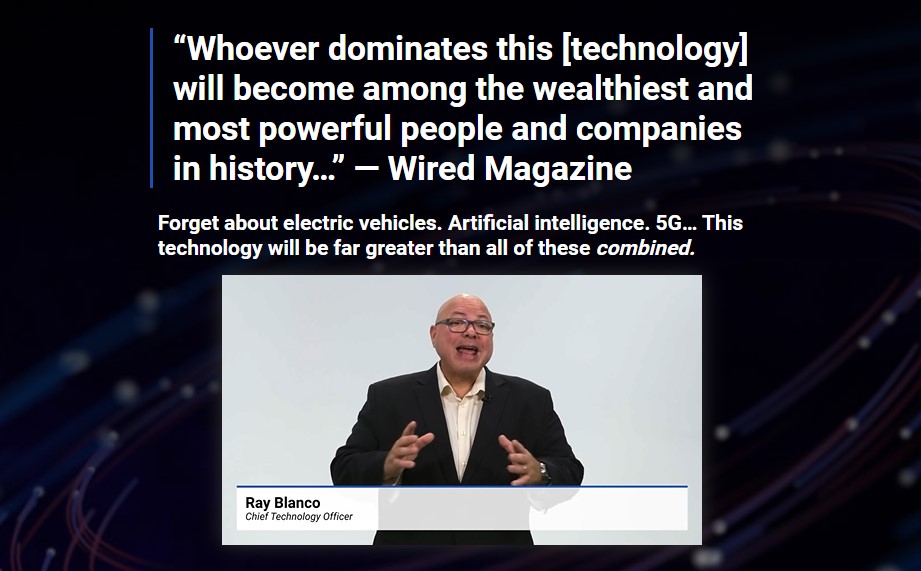 He says that the blueprint has predicted trends like the smartphone, mobile internet, and cryptocurrencies.

Ray claims that the final chapter is all about The Metaverse.

The Metaverse is a new iteration of the Internet that supports persistent online 3D virtual environments using conventional personal computing and virtual and augmented reality headsets.

Although the technology has been around, the concept has been made popular by Mark Zuckerberg, who’s betting the future of his company on the Metaverse. As part of Facebook’s rebranding to Meta, Zuckerberg demonstrated various applications of the concept in a series of presentations.

Ray Blanco says that it is the next big trend in the technology industry and he wants you to invest in it. He says that it will change nearly every aspect of your daily life.

Ray Blanco has identified a series of companies he wants you to consider investing in. But his first choice pick is Epic Games:

“The company is called Epic Games, and they’ve been developing the platform the Metaverse will be built on behind-the-scenes for years.

But they’ve finally rolled it out now for early access.

You’ll feel like you’ve been transported to a completely different time and place.

Early versions of the technology have already been used in producing popular TV shows and movies like Disney’s The Mandalorian, HBO’s Westworld, and Rogue One: A Star Wars Story.

But soon, top tech developers will begin using this 3D platform to build the landscape of the Metaverse.”

He says that you cannot invest in Epic Games yet because it is a private company.

The only way you can invest in it is to buy shares of Tencent Holdings (TCEHY) because it has a stake of 40% in Epic Games. Doing so will enable you to profit from Epic Games if its value goes up, it goes public, or gets acquired.

On top of that, he says that owning shares of Tencent Holdings gives you exposure to the other cutting-edge tech companies it owns.

There are other investment opportunities in a special report by Ray called:

Welcome to the Metaverse: 7 Companies Driving the Future $14 Trillion Technology

In this quick start guide, Ray Blanco covers every important detail of seven companies he expects to dominate the markets as they will be involved in “the next trillion-dollar tech megatrend.” 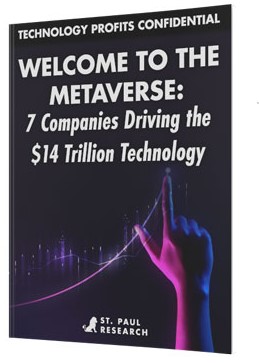 The seven companies are described by Ray Blanco in the pitch:

The Pick-and-Shovel Play Backed by Steve Jobs — Apple’s visionary co-founder was adamant about using this Kentucky company’s product for his first iPhone. The Metaverse will demand a lot more of it.

The Global Leader Delivering the “Eyes of the Metaverse” — Major players like Microsoft and Intel are using the technology right now in their Metaverse tech.

The “Mini-Monopoly” Driving the Metaverse — This European tech company is the only one in the world with the machines to produce this crucial component for the new “digital world.”

The Little-Known Company Behind Apple’s iGlass Revolution — Their technology is tucked inside most of the 2 billion smartphones in the world today.

The U.S. Military’s Metaverse Supplier — The military spent nearly a half-billion dollars to use this company’s devices in 2018. Now, they’re upgrading with a new $22 billion order for the latest version.

The Metaverse’s 3D Engine Pure Play — This company founded in Denmark has the essential engine needed to deliver the high-definition experiences to every industry from entertainment to the auto industry.”

You can get the special report for free if you sign up for Ray Blanco’s investment research service, Technology Profits Confidential.

Ray Blanco is the chief technology officer of St. Paul Research, which is owned by Agora Financial.

Ray has been fascinated by technology since he was a small boy. He grew up learning how to program while his friends played outside.

He earned a bachelor’s degree in IT from Hodges University. Mr. Blanco spent over ten years working for many companies as a network technician and systems analyst. Among his employers was one of the most successful private wealth management firms in the country — with over $30 billion in assets under management.

Ray Blanco decided to combine his passion for technology with his financial and stock market expertise when he joined Agora Financial in 2009. He now scours the markets for “the next big thing” in the technology sector.

He helps the individual investor stay ahead of the curve through his newsletters. He done other presentations concerning the technology industry before, including Elon Musk’s Hypernet and Tesla’s Million Mile Battery.

Ray Blanco’s Technology Profits Confidential is published by St Paul Research. Ray finds what he thinks are the most profitable tech stocks in the market and recommends them to hundreds of thousands of readers across the country. 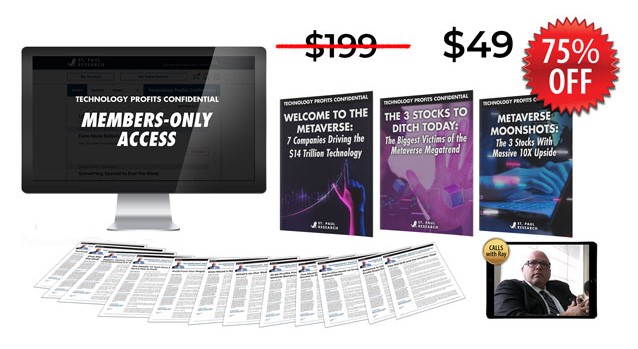 Ray claims that he focuses on cutting-edge companies developing technologies in the hottest tech trends (like the Metaverse). He says that his goal is to deliver opportunities with the potential to multiply your money 10x or more over time.

When you join Technology Profits Confidential, here is what you get:

Ray Blanco says that his tech team has been working hard to build out their technology for the Metaverse and when you sign up for the newsletter, they will give you an exclusive “all-access pass” into your own experience.

It sounds like they have developed virtual reality glasses or something along those lines and they want you to test them if you want to.

Besides those benefits, you also get two bonus reports from Ray:

The 3 Stocks to Ditch Today: The Biggest Victims of the Metaverse Megatrend 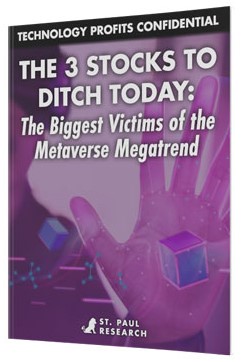 In this report, Ray Blanco reveals the details on the three companies he expects to fall in value as the Metaverse trend catches on. He says that you should not buy these three stocks.

Why? Because he expects them to be made obsolete when the Metaverse takes off. 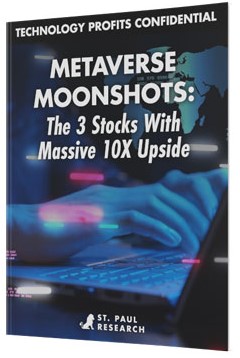 In this final guide, Ray reveals all the details on the little-known companies he believes have the potential to deliver 10x returns over the next couple of years.

“The first company was one of the top-performing stocks of last year.

It’s already climbed over 700% since then…

But because it’s intersecting multi-billion-dollar trends like finance, e-commerce, and gaming…

I expect this company could just be getting started.

The second company is an industry leader, with 210 patents in the wearables space…

That huge moat keeping out the competition could help make them a household name as the Metaverse becomes the biggest trend of the 2020s.

The third company is another little-known parts provider…

They’ve been mentioned in conversations with Apple, Microsoft, Google, and even the US military.

Ray urges caution with these stocks because he says that they are relatively risky. He says that for every 10 stocks like these, one or two take off for historic gains while the rest go down or stay flat.

In the presentation, here is what Ray says about refunds.

“If at any time during your first year as a member, you’re not completely delighted with the information, analysis, gains, or anything else about Technology Profits Confidential…

Simply call your VIP Concierge Team and we’ll promptly refund every penny of your subscription price. No questions asked.

A full 365 days to decide whether you like my service or not.”

However, he contradicts himself on the order page when he changes the duration from 365 days to 180 days:

To avoid contradiction, you should read the terms and conditions page carefully.

Ray Blanco believes that the Metaverse is the new tech megatrend we should be excited about. He says that it will change the way we live our lives and add over 23 million jobs in the coming years.

At the same time, he sees it disrupting old ways of doing business and could make a few iconic American companies go bankrupt.

The Metaverse has been in people’s minds even more prominently since Mark Zuckerberg did a series of presentations charting the future of Facebook (also launching Meta). But Ray Blanco does not urge people to invest in Facebook. He wants people to invest in other companies, led by Epic Games (owned by Tencent Holdings). For more details about his recommendations, you have to sign up for his newsletter.

Ray Blanco does not promise you that you will be a millionaire if you follow his recommendations. But he is pretty confident that he will get some of them right.