Charles Mizrahi did a webinar called Profits of A Lifetime Summit with John Burke to tease a special type of investment that “has the potential to make you a lifetime of profits – 500% or more – in just 5 years.”

In this article, we will find out what “special investment” he is talking about as I give you a quick summary of what the summit was all about.

What is the Profits of A Lifetime Summit? (The Pitch)

The Profits of A Lifetime Summit by Charles Mizrahi was shot to promote his new investment advisory service, Lifetime Profits. We will cover it in finer detail later, but first, let’s take a look at the premise of the presentation.

Before we dive in, I should point out that Charles is not new to this blog as he has been behind some presentations I have reviewed here, including The Internet of Medical Things and The American Prosperity Summit. 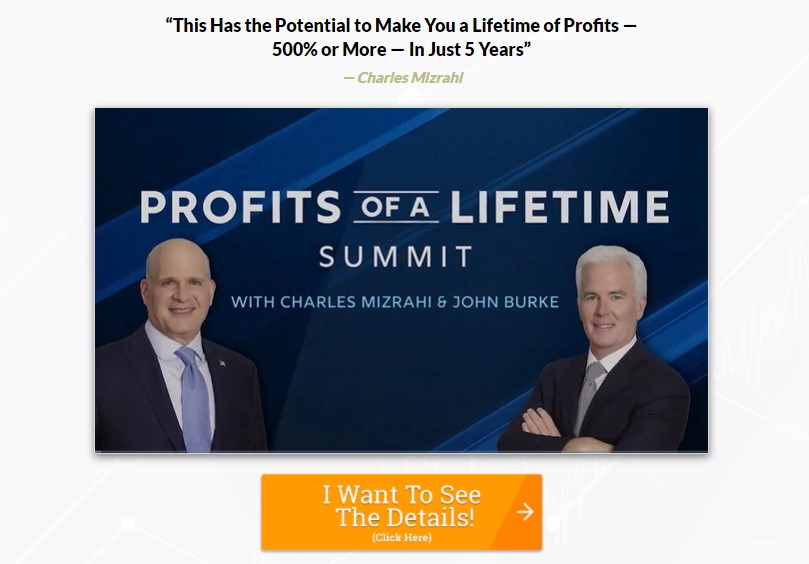 Charles believes that a majority of individual investors follow bad mainstream advice; they put their money in a fund and earn a 10% return in a year.

But he says that this conservative approach is not good enough because he has found a secret that enables him and his followers to earn more in a shorter period.

What is the secret?

Investing in companies that are about to issue new stock in a spinoff.

This occurs when a company creates a new independent company by selling and distributing shares of an already existing part of its business (or a subsidiary).

Companies do this for various reasons. A company may do a spinoff to offload a part of its business that it deems inefficient and putting a drag on its overall financials to focus on its more productive divisions. It can also conduct a spinoff if it feels that part of its business could do better as an independent entity with leadership that concentrates on unlocking its full potential.

When a company creates a spinoff, it has to file SEC Form 10-12B and distribute all ownership interest in the new company to existing shareholders as a stock dividend. This is what Charles talks about when he says that you may wake up one morning and find yourself with stock that you didn’t buy.

John Burke, the host of the presentation, has a folder on him that contains an SEC Form 10-12B that was issued by internet company eBay when it spun off PayPal. Here is how the exchange goes as Charles and Burke explain their “secret”…

Sure, it looks short and uninteresting…

But here’s why it’s so important.

A company submits this form to the SEC when it wants to spinoff a part of its business.

John: So … just to be clear … a company spins off part of its business … giving any current shareholders stock in the new company.

Charles: That’s exactly right. And when the right companies … the right ones … spin off part of their business into a new company — and they do it for the right reasons — the gains can be phenomenal

John: So … that’s a lot to digest … give us an example of how this works.

Charles: Sure. I’ll use one most people are familiar with … eBay.

In 2014, eBay was humming along … but so was its payment processing business, PayPal.

The funny thing is, PayPal was always a side business … eBay started it to make collecting money easier.

But then, the C-level executives, and top investors, realized that their PayPal feature was a business of its own … and that if it operated as an independent company, it could take off.

So, on February 25, 2015, eBay filed this 10B form. Five months later, when the spinoff was complete, anyone who owned shares of eBay was awarded an equal number of PayPal shares.”

Out of all the spinoffs happening in the market, there are some good ones and bad ones. So to determine whether a spin-off will be a success, Mizrahi looks for three core elements:

He looks at a host of factors besides those three and he does that with the help of a crew comprising forensic accountants and researchers who sift through data to ensure that he doesn’t miss anything.

What companies is Mizrahi recommending?

Charles Mizrahi teases three spinoffs that he wants you to consider.

Here is how he describes it:

“Let’s just look at the parent company for a moment…

It’s one of the TOP leaders in the drug industry.

This company has hauled in more than $39 billion in annual revenue a year … for four years straight.

Sales of its flagship medical treatments are soaring…

And it keeps smashing Wall Street’s earnings projections with ease…”

More on the parent company

“Plus, it’s pursuing not just one, but multiple coronavirus vaccines.

And analysts believe that its vaccines alone … just its vaccines, aside from all the other blockbuster drugs it produces … could be worth $100 billion.”

And what about its spinoff company? Here is what Mizrahi tells us:

“On top of everything else, the company has announced a spinoff. It’s spinning out its division that’s focused on women’s health.

This new company that it’s creating already represents $6.5 billion in revenue and will carry over 10,000 employees.

More important yet, health care professionals around the world already have deep respect and attachment to the division and its products because of its dedication and innovation in women’s health.”

“Exactly. And the person named as the CEO of the new company has 30 years … 30 years … of experience working for the parent company.”

Mizrahi says that if you want to benefit from the spinoff, you should buy the parent company as soon as you can because it could split by June 2021.

The company that matches these clues best is Sanofi S.A (SNY). Sanofi is a French multinational pharmaceutical company with its HQ in Paris. It is the fifth-largest pharma in the world by prescription sales with annual revenues that have averaged at $39 billion over the past four years. It is working on two separate Covid-19 vaccines.

It intends to spinoff its API business in Europe and has already named the new company EuroAPI. It has tapped Karl Rotthier to become the CEO of the new company. Karl has 29 years’ experience in the pharmaceutical industry.

“The second one involves an industry leader in networking solutions, IT distribution, and systems integration.

More about the parent company…

“They provide distribution and systems integration for more than 30,000 technology products … for more than 400 of the world’s leading and emerging manufacturers.”

“And now it’s going to spinoff its customer experience solutions division into a whole new company.”

He says that they already filed a 10B with the SEC.

These clues point to Microsoft Corporation (MSFT). Microsoft is pretty ubiquitous today due to its Microsoft Office suite and its networking solutions. It also makes the Xbox consoles and has thousands of products on its catalog (including subsidiaries). In July 2020, it announced plans to spinoff its Chinese chatbot business, Xiaoice, to become a part of a separate company that will prioritize commercializing the technology.

“The third one is a real hidden gem. It’s a $4 billion retail company based out of Atlanta.

Because of it, countless families are living more comfortable lives than they would be without it.

The products and services that it provides quite literally help to reshape American homes and lifestyles.”

As for its spinoff…

“It’s spinning off its financing division from its retail segment. And it’s expected to occur within the next few weeks or months.”

These clues point at Aaron’s Holdings Company, Inc (AAN). Aaron’s is an Atlanta-based lease-to-own retailer that has a market cap of $4.1 billion. In July 2020, it announced plans to spinoff thus creating two independent public companies; The Aaron’s Company, Inc and PROG Holdings, Inc (Progressive Leasing and Vive Financial), the financial division he was referring to.

Details regarding the three companies and their spinoff stories are in a report called Spinoff Fortunes that you can get for free when you sign up for Mizrahi’s new investment advisory service, Lifetime Profits.

Charles Mizrahi is an investor who has been in the financial service industry for nearly four decades. He joined the industry when he started trading at the age of 20 on the New York Futures Exchange.

Three years after that, he owned a money management firm and by the time he was 36 years old, he was doing so well, Barron’s ranked him as one of America’s No. 1 trader. He got offers from firms like Goldman Sachs and he went on to earn them 310% returns in three years.

He was also sought after by financial news outlets like CNBC and The Wall Street Journal. They came to him seeking his opinion on major economic and financial trends.

He walked away from Wall Street to write newsletters to help Main Street investors earn big gains on their investments. He now works for Banyan Hill where he is an editor. You can get all his newsletters by joining The American Investor Alliance.

What is Lifetime Profits? (The Newsletter)

Lifetime Profits is a new investment advisory service that Charles Mizrahi will be editing. Since he also offers other newsletters, what will be different about Lifetime Profits?

He will be concentrating on spinoffs, mergers, acquisitions, activist investments, and underpriced stocks as he says in his presentation…

“It makes investing in these spinoffs as quick and easy as can be. I do all the grunt work. I find the spinoffs. I evaluate them from top to bottom … uncovering every detail that I can.

And John … it’s not just spinoffs…

My team and I are also looking for stocks that are going through mergers.

We look for stocks that are getting a flood of money from activist investors.”

If you join the newsletter through the presentation, in addition to the free report (Spinoff Fortunes) that you get for free, you will be entitled to:

How much do you pay to join Lifetime Profits?

There are no refunds.

Closing Remarks on Profits of A Lifetime Summit

Charles Mizrahi held the Profits of A Lifetime Summit to promote his new advisory service, Lifetime Profits. He says that his investment strategy will be concentrating on “special situations” like spinoffs, mergers, acquisitions, activist investments, and underpriced stocks.

The focus of the presentation is spinoffs and John Burke cites a study by Deloitte that found that after a spinoff, both the parent company and the new company more than double the stock market in the following year, on average.

Note that although spinoffs can be lucrative, sometimes they are conducted for underwhelming reasons like offloading a section of the company that is underperforming or cutting away a part of the business that was on the market but lacked suitors.

In the presentation, Charles teases Sanofi S.A. (SNY), the Microsoft Corporation (MSFT), and Aaron’s Holdings Company, Inc (AAN). Now you don’t have to sign up for his newsletter to reveal those names as I’ve done that for you. If you choose to go ahead and become a member, remember that the $1,495 you pay is non-refundable.