Bill Spencer released a presentation where he talks about the possibility of earning Profits from the Apple Car before it even hits the market. The header reads:

In this article, we take a closer look at what Bill is talking about here as well as the investments he is touting. Keep reading to learn more.

Introduction to Profits From The Apple Car

Bill Spencer’s presentation is about profiting from the Apple car, which he calls the “iCar,” through investing in certain companies in the tech sector.

Bill believes that when Apple enters a market, it doesn’t just release a new product, it dominates the competition and changes the rules of the game. He demonstrates this by highlighting other groundbreaking Apple products like the iPod, the iPhone, and the Apple watch that have dominated and redefined their respective markets.

He also notes that every time Apple releases such a product, it isn’t usually the first to market. But when it enters the market, it has the highest quality product that blasts the competition out of the water.

This sentiment was shared by Ray Blanco when he did a presentation called “Apple’s Greatest Breakthrough Yet” where he was talking about Apple launching a constellation of internet satellites and providing universal internet coverage.

Bill Spencer expects this to happen in the automobile industry and he says “Apple’s Upcoming Car Will Be The Most Technologically Advanced Vehicle On This Planet.”

He says that Apple wants to launch a car and they have a project called “Project Titan.” The car will be 100% electric, completely self-driving, and it will have the capability to avoid all kinds of potential obstacles.

But he believes that you don’t have to wait for the car to be launched to start making money off of it. He also says that you shouldn’t buy one single share of Apple stock because the cars themselves are still years away from the market. He says that experts predict that the first Apple cars could hit the market in late 2023 or early 2024.

He has found another way to invest that enables you to start earning money from project Titan as early as November:

In fact, no matter when the Apple Car hits the market, I’ve found a way you could start getting paid from it as early as November 5th, 2021.”

How does Bill Spencer want you to invest?

He wants you to go for the companies that supply the vehicle parts rather than the carmakers. He explains it,

“Your typical car has 30,000 opportunities for you to make money.

That’s how many parts… down to the last screw… go into making the vehicle.

And the fancier the car… the pricier the parts.

But you won’t make that money buying the automakers.

But tire maker Cooper Tires, on the other hand, easily doubled that performance, going up 31.5%”

So, he wants you to invest in the suppliers that will enable Apple to make their cars.

This is familiar as we’ve seen other gurus tell us to ignore the household name company and go for the lesser-known supplier for even bigger returns. This has been a recurring theme in presentations like  Jeff Brown’s Elon Musk’s SAV Project and Jeff Bezos’ Big Bet by James Altucher.

The first opportunity is in the cameras that a self-driving car will use to “see the road.”

Bill has identified a specialty car camera supplier already delivering double-digit gains and he says that it has a potential 29x market move ahead of it.

The second opportunity is in next-generation sensors. Bill talks about Light Detection and Ranging (LIDAR) and the fact that it needs multiple sensors.

Bill Spencer talks of a sensor company that has won over DARPA and interested Tim Cook. He says that it has the potential to lead a trillion-dollar LiDAR boom.

The third opportunity is a technology that gives every camera eye and LiDAR sensor what equates to X-Ray vision so that the car can see what’s coming ahead, including whatever’s hiding around curves.

Bill Spencer believes that with this bleeding-edge technology, Apple cars will drive themselves safely on all kinds of roads and driving conditions.

He has found an underdog company that he says has “x-ray vision” that could make investors a lot of money.

He has written a report titled Apple Car Cash-In: 3 Ways To Profit Today From The Car Of Tomorrow that has all the details regarding these companies.

To get a copy of the report, you have to sign up for his newsletter called Founders Forecast.

Who is Bill Spencer?

Bill Spencer works for the publishing company, True Market Insiders, as its editor in chief. True Market Insiders is an independent publishing firm that puts out its financial research through its newsletters targeting retail investors. It is behind advisory services like Sector Focus and Chris Rowe Investor. 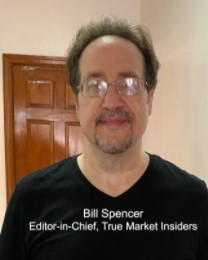 Bill Spencer has been a fixture in finance, economics, education, and publishing for nearly three decades. He started his career in 1988 when he was recruited by the Federal Reserve Bank of New York to handle their largest deposits. From the time he joined through 1996, he was training Federal Reserve staff and management.

He left the New York Federal Reserve Bank and moved to the private sector where he worked with some of the top luxury brands. He was also a consultant for Pierre Cardin and Calvin Klein.

During the Dot Com Bubble of the nineties, Bill Spencer was producing an investment dossier for Morgan Stanley’s high net worth clients called Tech Week. He also worked at Bear Stearns in mergers and acquisitions as well as Greenhill & Co., and VIACOM.

He then joined the newsletter business and his first job was at Tycoon Publishing/ Institute for Individual Investors (IFII) and this firm was later acquired by Agora Inc. He now works together with Chris Rowe and Costas Bocelli at True Market Insiders.

Founders Forecast is an investment research service published by True Market Insiders and headed up by Bill Spencer.

Bill writes about emerging technologies and special deals that have the potential to create generational wealth. He has used his network to identify investment opportunities.

On top of that, if you sign up for Founders Forecast, you get the following bonus reports:

How to Profit from “The End of the Airport” 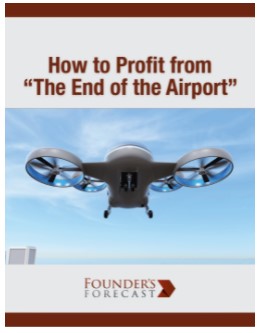 Bill says that there is replacement technology that could eliminate airports and grant you the freedom to travel wherever and whenever you want. He has found an investment that he expects to generate gains as high as 479%. 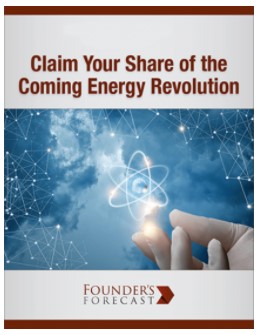 This report is about the “next generation” of clean energy that he says will transform the nation’s power supply. After all the power failures in 2021, he believes that this is the one way to guarantee America has a stable, affordable energy supply. Bill says that he has found an expert who says this could be the biggest thing since nuclear in the 1960s. 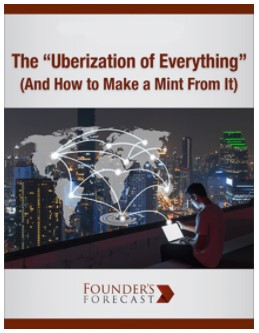 Bill Spencer says that the world is moving to a future where we own less and less and are happy about it. This is what he calls the “uberization” of everything. In this report, he explains how you can cash in on this trend even without full ownership of certain assets and supply chains. He has a dedicated stock pick that he believes is headed for the moon.

This 5G Supplier is Set to Fatten Your Account 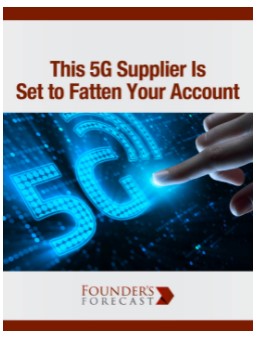 Bill Spencer says that 5G deployment is already underway in most cities and by 2025, he believes more than 21 billion devices will be running on the network. He says that if you want to ride these sector gains up, you’ll need to know which companies and parts suppliers offer the best potential returns, and that’s what this report is all about.

Boost Your Returns With This Large-Cap Cyber Standout 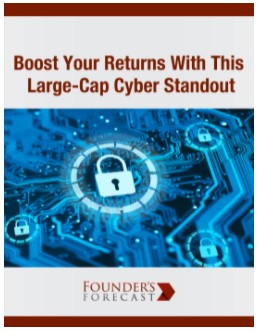 Bill says that cybersecurity is one of the biggest crossroads technologies in the world. He believes that a hyper-connected world makes it essential that we have security. He says that this industry is more important now than ever, and claims that some reports state that over $1 trillion will be invested in this sector.

What is the Founders Forecast Subscription Fee?

A One-Year Subscription to the Founders Forecast is paid for depending on the subscription plan you choose. There are three plans:

The Founders Forecast newsletter has a 180-day money-back guarantee.

Bill Spencer’s presentation is about how you can profit from the potential launch of an Apple Car. He expects it to be fully electric and self-driving and is banking on the tech giant’s record of producing amazing products. He wants you to take advantage of its launch by investing in companies that he thinks could be Apple’s suppliers.

I should point out that he is just speculating and there’s nothing set in stone because Apple has kept their car project under wraps so far. Therefore, Bill Spencer could end up being wrong about these being the companies that supply Apple.