I recently got an email inviting me to take a look at an event by Ted Bauman called the Profit Switch Summit.

The gist of it is that Ted will start offering a new advisory service where he will be sending his subscribers a new trade every week.

I sat through his hour-long presentation and decided to put together this article to provide you with an overview of what he discussed.

What is Profit Switch Summit? (The Pitch)

Ted Bauman recently hosted the Profit Switch Summit during which he introduced us to a new investment advisory service called Profit Switch. The service is built on an indicator that times the market to capture short-term returns. 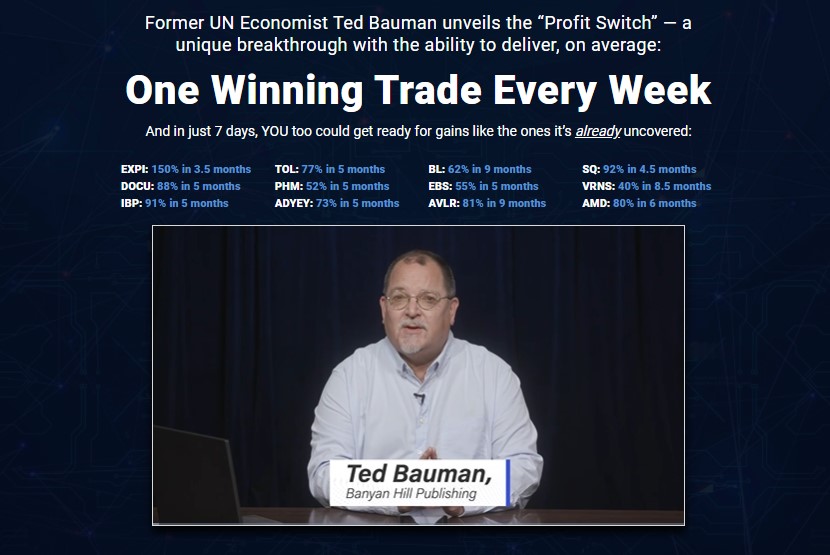 I call my creation “The Profit Switch.”

And it alerts me to potential price surges days BEFORE they happen.”

He says that he developed the service with the help of another analyst who uses a powerful AI supercomputer that helps with timing the market.

“I was about to walk into a private meeting with a man accustomed to moving hundreds of millions of dollars around with the flick of a finger. The chief investment officer of a $13 billion investment fund. A fund that U.S. News and World Report ranked number one in the U.S. in its category under his direction.

And in that meeting, he gave me what I can only describe as an ‘ace in the hole.’

He brought to the table a powerful AI supercomputer — capable of mining 63 million data points every second.

This type of supercomputer is so profitable, Goldman Sachs spends approximately $113 million every year just to maintain their version.

We later learn that this guy Ted says he met is Clint Lee, who is one of the analysts at Banyan Hill. He contributes to Bauman Daily and is an analyst for The Bauman Letter. He runs an investment newsletter at Banyan Hill called Flashpoint Fortunes.

How does The Profit Switch work?

Here is how Ted puts it:

“First things first, though. Let’s go underneath the hood — and dive into something that, until today, only two people on planet earth have ever known — how my Profit Switch alerts me to huge price moves before they happen.

When just two of these indicators are trending up, the odds are in your favor. You have a very good chance of making money.

But when all three trend up — and intersect — you know with a STRONG sense of certainty that the stock is about to soar.”

These three indicators are placed on a stock chart and they help determine when you should invest in a stock:

“Those first two forces tell you when a stock has built up huge pent-up demand.

And the final force tells you when that demand is about to be released, in the form of a huge upside move.”

The first force is something he refers to as external compression. It involves all the external forces acting on the stock’s wider market and is based on market conditions like total addressable market, the rate at which investment capital is flowing into other stocks in the industry, market growth, geopolitical factors, and commodity prices.

Ted says that after weighing all those factors and comparing a stock’s price to other similar companies, if its price is low compared to its peers, it will have a high degree of compression.

The second force is something he refers to as internal pressure. This one examines internal factors that affect a stock’s price i.e. the fundamentals of a company. Things like sales growth, net revenue, retention rate, relative return on equity, just to mention a few.

He says that it tells us how high a stock can go when its compressed potential is released.

The third force is escape velocity. He says that it is based on technical signals and enables you to determine when the stock is about to go up to time your entry point.

When the three signals intersect, it means that it is the ideal time to buy the stock.

To gain access to insights gleaned from this system, you have to enroll in Ted’s new advisory service called The Profit Switch.

Ted Bauman is an investment guru who works for Banyan Hill Publishing. He joined the firm in 2013 and has been the editor of The Bauman Letter, Bauman Daily, and now Profit Switch.

He claims that he has spent most of his life showing people how to secure their wealth through his newsletters.

He used to work in the nonprofit sector as a consultant before he joined the world of finance full-time. He has lived and worked in many countries.

Ted has been quoted in publications like The Guardian, Forbes, MarketWatch, Barron’s, and Benzinga. He has also published articles in international journals and co-authored a book called Where to Stash Your Cash (Legally) with his father, Robert Bauman (A former congressman).

What is Profit Switch? (The Newsletter)

Profit Switch is a new investment advisory service that Ted Bauman will be offering at Banyan Hill Publishing. He promises that he will be delivering a winning trade every week to his subscribers.

When you join the newsletter, you will be entitled to:

How much do you pay to join Newsletter Name?

The annual subscription fee is $1,497

There are no cash refunds.

The Profit Switch Summit was a presentation by Ted Bauman of Banyan Hill meant to promote a new investment advisory service he will be offering called Profit Switch.

The service is built on a proprietary AI-based trading system that enables him to time his moves to coincide with when a liquid stock is about to go up. So it is about timing the market, all said and done.

It is worth noting that many investors, academics, and professionals agree that timing the market is impossible while some people, particularly day traders, strongly believe in it. So, concerning its efficacy, it depends on who you ask. That being said, it is widely agreed that the challenge is to time the market consistently in the long term.

Ultimately, you have to decide whether Ted’s newsletter will work for you and as you make that decision, remember that he offers general advice, not personalized.