Ian King, a trading expert who works for a financial publishing company called Banyan Hill, will be hosting the “Profit Framing” webinar.

At this event, he says that he will reveal, for the first time, the complete details behind his breakthrough income-generating options strategy that goes by the same name as the event, Profit Framing.

As we look forward to the event, here is what we should expect from Ian having followed what he has been saying in the lead up to it.

Ian King’s Profit Framing Webinar — published by Banyan Hill Publishing — will be all about revealing his options trading strategy that he calls “profit framing.” He says that we should pay attention because he has never revealed it before. 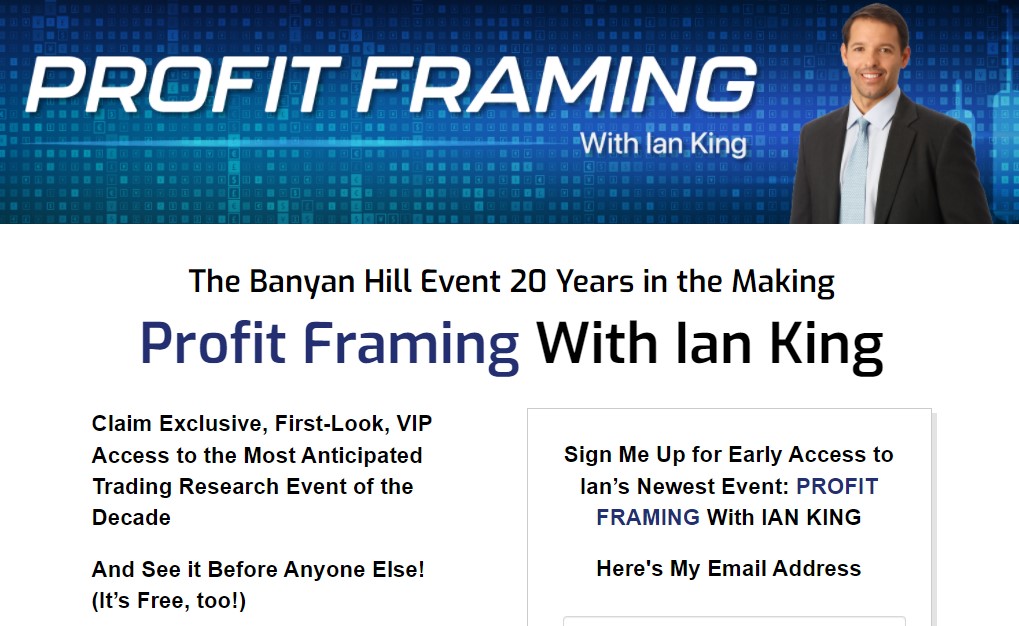 Ian claims that it is a conservative option trading strategy that he designed to generate consistent income.

He says that it has been 20 years in the making because the strategy derives from what he personally learned from two accomplished options traders on Wall Street back when he was working there.

He says that the plays that are derived from the strategy can create one of the most powerful, consistent income strategies in the market.

At the event, King intends to reveal:

King says that profit framing is often used by professional traders and hedge funds to guide their trading in a way that lets them generate consistent income for their clients and themselves.

Ian King is a professional trader and analyst. He is a former hedge fund manager with over 20 years of experience trading and analyzing the financial markets.

His journey in the financial services industry began at the age of 21 when he started his career in the mortgage bond trading department at Salomon Brothers.

He worked for other firms on Wall Street. For example, he worked at Citigroup before spending a decade at New York-based hedge fund Peahi Capital. He learned a lot about the markets, a skill set he has brought to newsletter writing.

While he was a hedge fund manager, his team made a 339% total return in 2008 alone. This is pretty impressive because, in 2008, we had the Global Financial Crisis decimating people’s investments. So, to have him and his team achieve that must have been satisfying.

Ian King joined Banyan Hill Publishing in 2017 and began helping readers get ahead of the markets. He is the head editor of a couple of premium investment research services, including Strategic Fortunes, New Era Fortunes, and Next Wave Crypto Fortunes.

His market insights have been featured on Fox Business News, Investopedia, and Seeking Alpha.

In the Profit Framing Webinar, we expect Ian King to talk about his options trading strategy that he is telling us is quite solid.

If you’ve ever traded options, you know that they have their upsides and their downsides. For example, although they offer leverage and can potentially amplify your returns, you can lose your money very easily with the wrong approach.

The problem with options is that a majority of people don’t understand how they work and there can be a lot of unmet expectations when you start trading.

That being said, it will be interesting to see what Ian King is proposing to his readers.