Wondering what Pre-Programmed Stocks are?

I recently stumbled across a presentation that Jeff Clark released known as “Pre-Programmed Stocks.”

It was about what Jeff believes is an “automation of the stock market” that has led to the rise of stocks that are “pre-programmed” to deliver consistent returns.

I sat through the whole video and after analyzing Jeff’s message, I put together this article to give you a concise overview of the main points he raised in the presentation.

In reading this, I hope you will be better positioned to decide what to make of Jeff’s message.

What are Pre-Programmed Stocks? (The Pitch)

Pre-Programmed Stocks is the title of a presentation recently made by Jeff Clark to promote his new investment research service, the Delta Report. 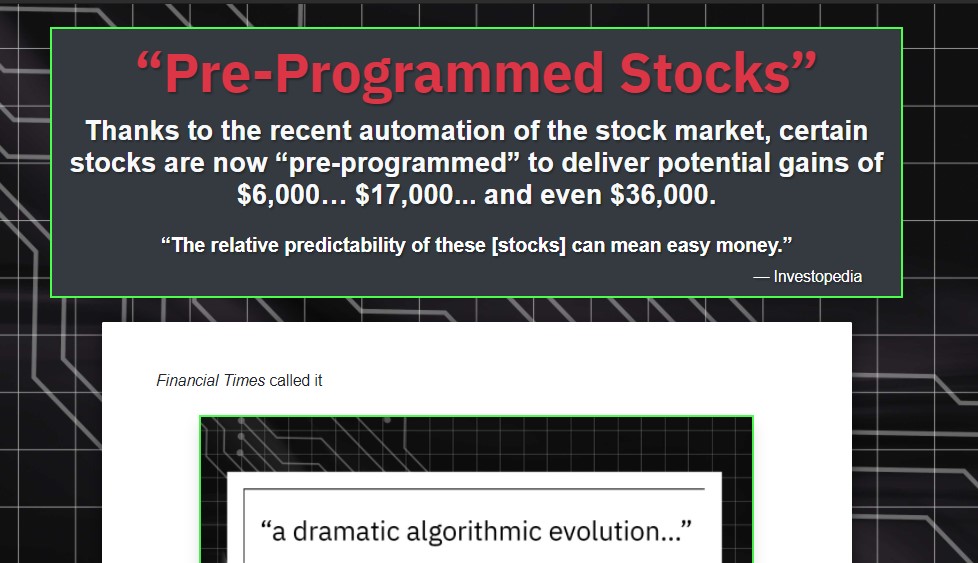 He also describes his investment strategy, a discussion that is dominated by the talk of a new group of stocks that are “pre-programmed” to move in certain ways.

Jeff tells us that there is a new trend that is sweeping across the markets that are allowing Wall Street investors to earn “automatic profits” at the expense of Main Street Americans. This excerpt from the presentation pretty much sums up Jeff’s core message:

“If you’ve been investing in or following the markets…

I’m sure you’ve noticed a lot of wild moves that just don’t make any sense.

Another company beats earnings… and the stock plunges.

Or maybe you’ve invested in a great company and shares went nowhere for years.

As I’ve been telling you, this is all happening because machines have taken over.

He says that many firms are turning to computers to trade for them and this has had such a big impact on the market that those computers now control a portion of the market, which sometimes has a domino effect on the rest of it:

“In fact, according to official estimates…

Machines are now driving the price of 3,517 stocks.

We call them ‘pre-programmed stocks’…

And as that excerpt proves, he believes that computers are to blame for the strange behavior of the aforementioned stocks.

So, what are those price levels he is talking about?

And trading around those levels.”

The support and resistance levels dictate how those machines trade.

Jeff gives a couple of examples of this. One of them is Gilead Sciences:

Its support level was around $60, so when the stock approaches that, the computers buy shares. Then when the price approaches $66, the resistance level, those computers bet against it thus influencing its price and ensuring that it never goes beyond the two levels.

His trading strategy involves predicting these price movements by studying the price patterns and looking for the support and resistance levels of affected companies.

“It involves reverse engineering the algorithm that’s behind these machines.

Because if you know what these machines will do next…

Then you can legally get ahead of the big market moves.

And we reverse engineer those algos by looking at past patterns…

Because that’s exactly what these robots do.”

He uses that information to predict how a stock is likely to move and acts accordingly i.e. If it is approaching the resistance level, he bets against it and if it is about to approach its support level, he does the opposite.

Rather than trade stocks, he prefers options, which we’ve seen him do in his previous presentations like The 5 Minute Money Multiplier and The 3 Stock Retirement Blueprint.

Jeff Clark has written a report titled How to Make a Fortune from “Pre-Programmed” Stocks. It explains how this trading strategy works. He is giving away a free copy of the report to new members of his advisory service, Delta Report.

Jeff Clark is an investment analyst and the founder of Jeff Clark Research for which he is also the editor in chief. He edits Jeff Clark Trader and The Delta Report.

He is a professional options trader and most of his investment advisories focus on profiting from options in any market environment.

Before he started writing newsletters, he worked for a brokerage house in San Francisco. He managed the portfolios of around 100 of California’s wealthiest individuals. During his stint there, his approach was a blend of conservative and speculative depending on the situation – he still follows this approach in his advisory services.

Before he launched his firm (Jeff Clark Research), he used to work for Stansberry Research. He was the editor of two newsletters, namely Pro Trader and The Short Report.

What is Delta Report? (The Newsletter)

As I mentioned at the beginning of this presentation, it was all about promoting Jeff’s newest advisory service, Delta Report.

In the presentation, he breaks down “how it works” into three steps:

He has written a handbook with the title How to Make a Fortune from “Pre-Programmed” Stocks. In it, he delineates this strategy and explains how you can mitigate risk exposure by up to 25-50%.

Here’s what you get when you sign up for the Delta Report newsletter:

How much do you pay to join Delta Report?

Instead of a refund, here’s what you get if you decide to cancel your membership:

This means that you can divert your subscription fee to any other service the publisher offers.

You also get an extra year for free if the model portfolio fails to give you the chance to double your money at least 10 times in one year.

Although Jeff Clark released this presentation to promote his newsletter, he spends most of it talking about the impact that computers have on the markets. He says that they have skewed the prices of some stocks such that they no longer obey the laws that previously governed their price movements.

Therefore, when it comes to those stocks, rather than analyzing financial reports, P/E ratios, and growth trends, you are better off working with the support and resistance levels.

Although Jeff merely points this out to market himself, he is right about big institutional investors embracing technology by using computers to trade. He even points out that an institution like JP Morgan has more engineers than Facebook to emphasize his point.

That being said, do not shun what he dismisses as “traditional investment strategies” (specifically fundamental analysis) because it still is an effective way to analyze stocks especially when you adopt a long-term approach.