The panelists discuss a variety of issues, key among them a “mysterious Nasdaq glitch” that enables one of them to detect big stock moves in advance.

In this article, I give you an overview of the pitch and in the process explain what they meant by that.

What is Outlier Investments Summit? (The Pitch)

The Outlier Investments Summit is an event that was hosted by Chris Hurt and Jeff Brown. It also featured Jason Bodner who will be joining Jeff’s firm, Brownstone Research. 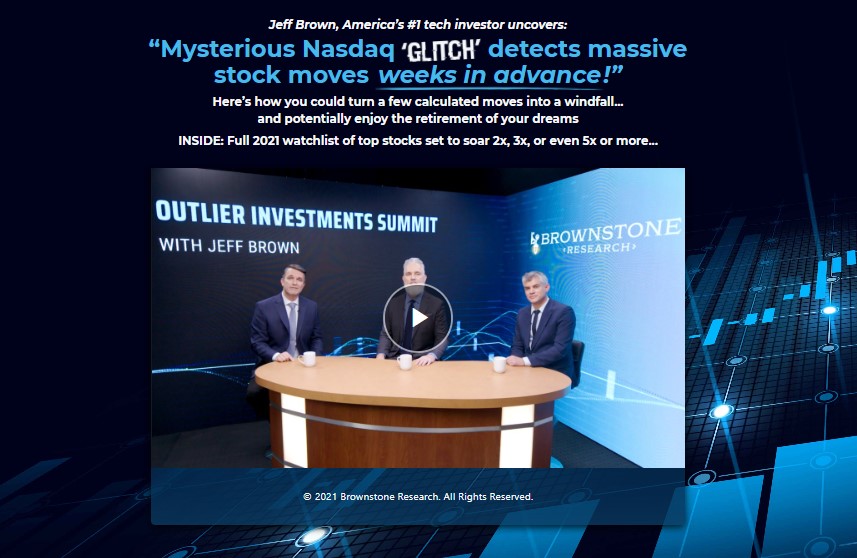 The summit was a formal introduction of Jason and the new investment advisory service he will be offering at the firm called Outlier Investor.

The discussion centers on some “glitch” in the market that enables Jason to find stocks that are about to go up, weeks before they do.

Jeff is the first to bring it up, saying:

“There’s an obscure phenomenon in the markets…

And in those rare moments…

I call it a stock market ‘glitch’…”

Which can result in gains beyond your wildest dreams.

Jason claims to have a trading system that predicts major market moves. He even says that he predicted the market drop caused by the pandemic last year in March, months before it happened.

Here is how the conversation plays out in the presentation:

[Chris]: Still fresh in my memory, Jason… it was painful to watch all those stocks plummet… millions of Americans out of work…

[Jason]: True. And, not to brag, but I was able to predict the market drop months before it happened…

In fact, I missed the bottom of it by just one trading day!”

We learn that the glitch they are talking about occurs when big money goes into a stock all at once, causing its price to go up. To explain this, Jason gives an example of a company called Novavax that witnessed such a demand spike:

“Over $73 million flooded into Novavax behind the scenes. Franklin Resources, Goldman Sachs Group, Bank of America, and more… they all piled in… together they bought over 30 million shares…

You never saw it in your regular stock charts…

It wasn’t even reported publicly until weeks later…

My system detected this movement soon after it started. And signaled the glitch…

That’s how I knew Novavax was about to take a ride. I wasn’t guessing. I knew it for a fact. It’s a simple law of supply and demand… and I saw it in my charts.

Concerning the system he says enables him to track those trades:

“And I created a proprietary system to track these trades… virtually within moments they happen.

That’s also the reason why I keep calling these Big Money trades a ‘glitch.’

Because to me, they do represent…

The ‘glitch’ in the Wall Street Matrix

They’re ‘invisible’ to almost everyone.

If you ever want to find out what the Big Boys are doing… you have to go and search these SEC filings yourself… or wait for the big headlines on CNBC.”

He says that although those big investors are required to make those moves public, they can take weeks or longer to reveal them to the public and by then, the profits have been made by the lucky few who know of those moves as they happen. So, his strategy is based on finding out about them early on.

And he goes on…

“What I’m looking for are the signs of Big Money flows. Where is it moving next? What stocks are being mopped up by Buffetts, Icahns and Ackmans out there?

My system is able to detect these moves within 24 hours before they happen.

Then, based on some additional proprietary criteria… I pinpoint 20 stocks each week…”

So his strategy is to find the stocks that big money has moved into and investing before other investors catch wind of them. He has built his new advisory service on this system.

Who is Jason Bodner?

Jason Bodner is the newest member of Brownstone Research.

He has been working for Palm Beach Research Group, a boutique investment research firm that offers general advice to retail investors like Brownstone Research.

Before he joined Palm Beach Research Group, he spent nearly 20 years on Wall Street working for big firms. He joined Cantor Fitzgerald in 2001 whose offices were at one of the World Trade Center buildings. Jason was moved to the London office weeks before the terrorist attacks. He worked for the firm for 12 years and towards the end of his time there, he was the head of equity derivatives in North America.

He has been invited to speak at many conferences, including one hosted by the Chartered Market Technician Association.

What is Outlier Investor? (The Newsletter)

Outlier Investor is a new investment newsletter offered by Brownstone Research. It is headed up by Jason Bodner.

In the presentation, Jeff Brown explains that they decided to start offering it to provide their followers with investment advice touching on sectors outside the tech industry, which is where Jeff’s services focus.

When you sign up via the pitch, you are entitled to three free special reports:

How much do you pay to join Outlier Investor?

The annual subscription fee is $2,000 and you get one extra year for free if you sign up through the presentation. So it becomes $2,000 for two years.

They don’t offer cash refunds. Instead, they give you 90 days to try the service and if you are unsatisfied, they allow you to subscribe to move that $2,000 to any other service offered by Brownstone Research.

After watching Outlier Investments Summit, one thing that comes out of it is that Jeff, Jason, and Chris push the narrative that Wall Street is out to take advantage of the market at the expense of Main Street investors. You see this with many investment gurus who tell people that the system is rigged to favor the rich. I will let you make of that what you will.

I also noticed that a good chunk of the impressive returns that were paraded in the presentation were results of backtests. While this isn’t necessarily a bad thing, it goes to show that Jason’s system hasn’t been stress tested in the markets enough. That is also worth pointing out.

As for the investment newsletter, Outlier Investor, you should do more research to find out whether it works for you because the advice Jason gives is general, not personalized.