Brownstone Research, the firm that publishes Jeff Brown’s advisory services, has been promoting a new presentation from him about a technology he is calling “Omnia.”

According to him, there is one company 459 miles south of Silicon Valley that will spearhead this technological development and possibly grow 133,000% in the next 24 months.

Let’s take a closer look at Jeff’s pitch to find out what Omnia and the company he is teasing as the next big investment opportunity are.

What is Jeff Brown’s Omnia?

Jeff Brown regularly writes about investment opportunities in the technology sector and his latest webinar, he introduced us to a technology he was calling “Omnia” that he said will have a massive impact on our economy. 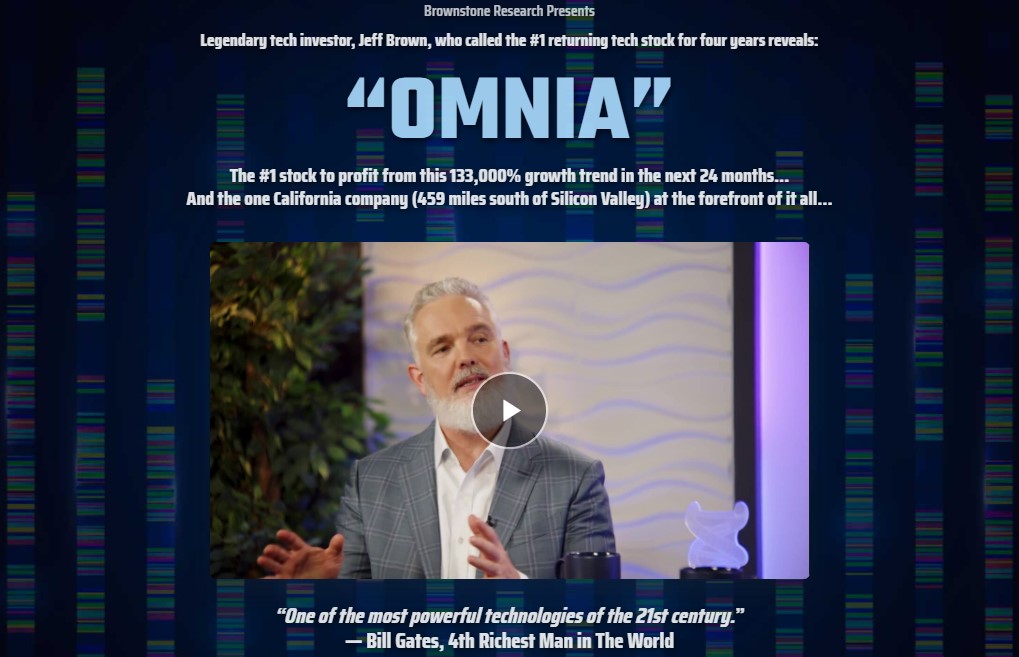 He quotes guys like Bill Gates and Elon Musk who both separately lauded this new piece of tech as arguably one of the most consequential technologies of the 21st century.

The hyperbole and grand projections aside, what is Omnia?

What Jeff Brown is referring to is a DNA sequencing machine. 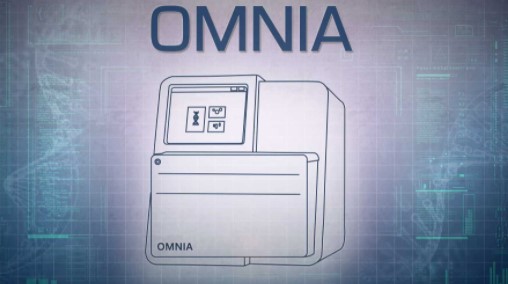 He chose to call it “Omnia” because the term is Latin for “everything.” His justification is that DNA is in all living things and, therefore, has the power to impact everything we do as humans.

More importantly, this presentation is about a machine that was made by a Californian company. The machine’s job is to sequence DNA to make it available for analysis.

Jeff speaks so highly of the DNA sequencer, he even claims that it could be as impactful, if not more impactful than the internet.

The internet, as you know, has been arguably one of the most consequential advances we’ve made in the last hundred years because it has changed the way we communicate, the way we transact, and even how we invest.

His research has shown him that the adoption of Omnia or DNA sequencing will grow 133,000% in the next 24 months. That’s 6 times faster than the internet grew from its inception. 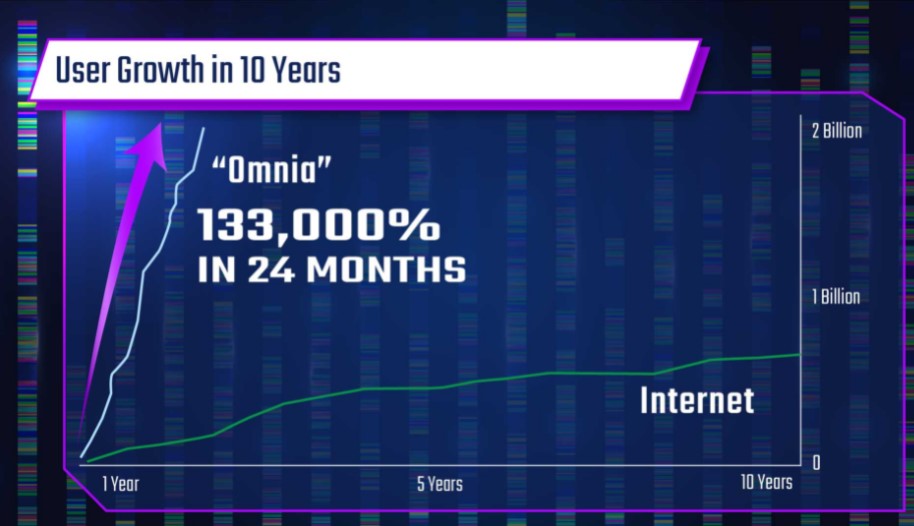 Jeff Brown is not the only financial guru that’s obsessed with a DNA sequencing gadget. A few months ago, Adam O’Dell released a presentation that went viral where he was talking about advances in gene sequencing and a device that was being used for this purpose.

He called the device “Imperium” and claimed that it would have a big impact on multiple industries. 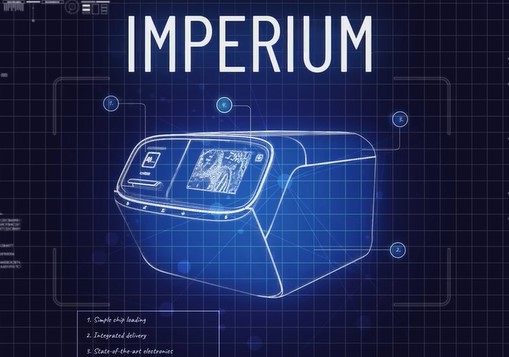 He was not promoting the same stock as Jeff did in his Omnia presentation but there were striking resemblances in how the two of them approached the matter. One thing they agreed on was the extent to which gene sequencing will be useful.

Jeff Brown believes that DNA sequencing will have many uses and that it will not just affect your day-to-day life, it will change the way you invest in the stock market, the foods you eat, and how much you pay for your prescriptions.

He says that it will have an impact on a few major industries. 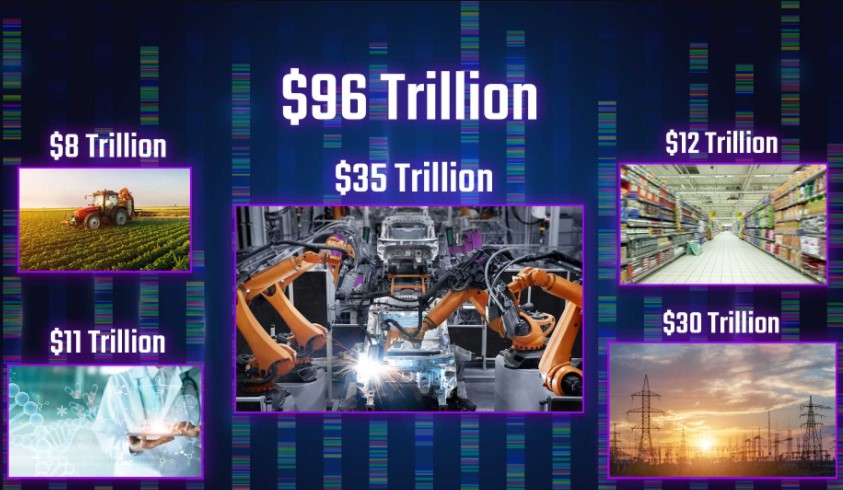 The first two industries Jeff expects to benefit from better DNA sequencing technology are the agriculture sector and the food retail sector.

He says that farmers will have the means to find the most productive crops because they will better understand plant DNA. Therefore, they will have an easier time finding crops with the best gene variants; crops that produce more yield and are less susceptible to pests and diseases. This is already happening but the process will be more efficient.

Another industry to be affected is the healthcare sector. Jeff claims that most of the genetic diseases that kill people will be eliminated. With a better understanding of genetics, doctors will have an easier time crafting bespoke cures for these diseases rather than producing drugs in a “one-size-fits-all” format.

The $30 trillion energy sector will also benefit from genetic sequencing because we will create enzymes that will, in turn, help us make tons of biomass that can replace non-renewable sources of energy. 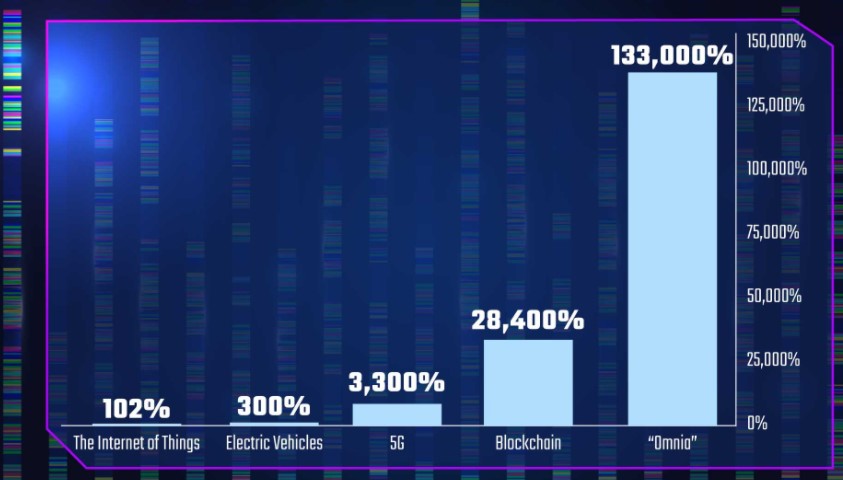 And that brings us to investing in the trend.

Jeff tells us that although most investors are oblivious to the potential of the genetic sequencing trend, rich and savvy investors are already plowing tons of money into it.

Even the biggest names on Wall Street are getting involved. For example, BlackRock has a $2.1 billion stake in genetics-related companies, Fidelity has invested $1.2 billion, and Vanguard has over $600 million.

How to invest in the Omnia Trend

As I mentioned in the preamble, Jeff Brown has identified one company in California that he wants you to consider backing as this trend unfolds.

Jeff wants you to emulate those institutions and investors already investing by grabbing a stake in this tech breakthrough. And he has one stock he wants you to back, for a few reasons.

The company he is teasing makes a DNA sequencer that can sequence the human genome in a matter of hours, a vast improvement on traditional methods of sequencing. It is also more effective than what competitors are making.

For context, the first human genome to be sequenced took almost 15 years and cost $2.7 billion.

But with devices like the one it has made, the process won’t take long and it will be cheaper. Therefore, given how important Jeff tells us understanding DNA is, the impact could be huge.

On top of that, this company has the most dominant and powerful patent libraries in the industry and may have a virtual monopoly over its DNA sequencing technology.

Jeff Brown reveals all the details concerning this company in a special report called “Omnia”: One California Company at The Forefront of the 133,000% DNA Megatrend. 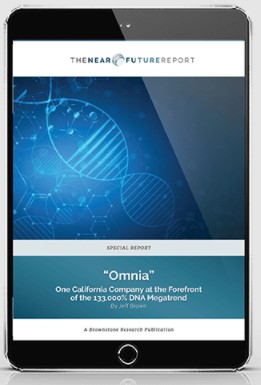 If you want to get your hands on a free copy of this report, you have to sign up for Jeff Brown’s The Near Future Report.

Fortunately, you don’t have to pay for that newsletter if you don’t want to because after doing a bit of research with the clues he gives us, I was able to reveal the name of the company most likely to be the one he is teasing.

I believe that the company he is talking about is Illumina (ILMN).

Illumina is based in San Diego and one of its main goals is to provide clients with gene sequencing technology.

Illumina’s products have been popular and, as a result, its market value has grown tremendously over the past few years. It has also grown its revenue from a few million dollars per year a few years back to $3.239 billion in 2020 with a net income of $656 million.

He publishes his work via Brownstone Research, the firm he founded in 2020.

Jeff has grown his reputation through his impressive record of predicting how the technology industry will pan out in the future to the extent that he is now regarded as a top tech investor.

Jeff is also an active angel investor and has so far been involved in over 300 deals – these are startups that were seeking funding.

Jeff usually writes in his daily newsletter about where the next major move will be in the technology sector and the investment opportunities people should latch on to. He also does it in his presentations, and this pitch is a good example of this.

Jeff is usually spot on with his predictions because he has access to information about the tech industry that few other investors ever have. He has more than 25 years working as a high-tech executive to thank for that.

As I mentioned earlier, the only way to find out more about the “Omnia” tech trend and others like it is to sign up for Jeff Brown’s Near Future Report.

The newsletter mainly tackles new tech findings and breakthrough technologies before they are adopted by the masses. However, they shouldn’t be slow burners because he expects the companies he recommends to take off “in the near future.”

DNA Fortunes: Your Chance to Grab A Large Gain from The Hemophilia Cure.

Jeff thinks that he has found a company that may dominate the $11 trillion healthcare industry because it is using DNA technology to cure hemophilia. 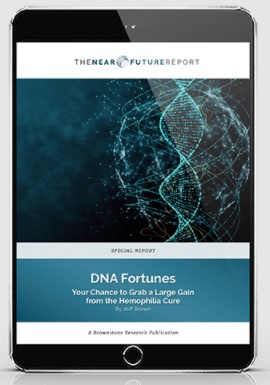 So far, it has already helped 120 folks suffering from hemophilia in clinical trials and it intends to charge up to $2 million for its hemophilia cure.

DNA Technology: The Cure to The Little-Known Cancer

This report focuses on a company that is using DNA technology to cure lymphoma. Two leading experts in DNA analysis work for it. 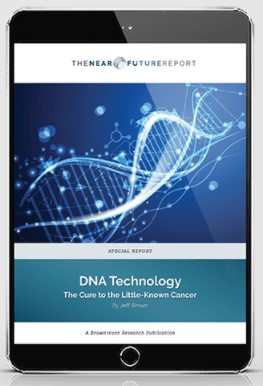 This company has one of the largest databases of DNA sequences in the world and using that information, they’ve developed a drug to help cure lymphoma.

In your first year subscribing to The Near Future Report, you will pay $49. Every year after that, your subscription will renew automatically (unless you cancel it before the renewal date) for $129 per year (plus applicable taxes).

Jeff Brown’s Omina presentation focuses on a DNA sequencing device that Jeff hopes will be useful enough to impact several billion-dollar industries. He is ambitious enough to say that it will be adopted faster than the internet, and we know how fast the internet took over our lives.

Jeff Brown is backing one company in California that is great at making DNA sequencing machines. I suspect that he is talking about Illumina (ILMN) but I may be wrong. All he says is that this company has a bright future and he thinks it will be a great investment.

Jeff hosted the webinar to sell his premium newsletter called The Near Future Report. It is dedicated to finding promising technology companies on the cusp of breakthroughs. He is not always right but he has made some important predictions for his subscribers. This service may be worth checking out if you are looking for fresh investment ideas in the tech sector.