Nick Giambruno is known for his doom and gloom predictions and it is no different in his latest presentation, America: Ground Zero. The header reads,

“A dark financial storm is brewing in America right now. And while it could damage the savings of millions of Americans…

In this article, I walk you through the phenomenon that Nick is referring to as well as reveal the name of the $3 stock he is teasing here. Keep reading to learn more.

Nick Giambruno’s America: Ground Zero presentation centers on what he refers to as a “financial storm” that he thinks we don’t have much time to prepare for. He urges urgent action because as he puts it “the actions you take today will radically alter your life.” 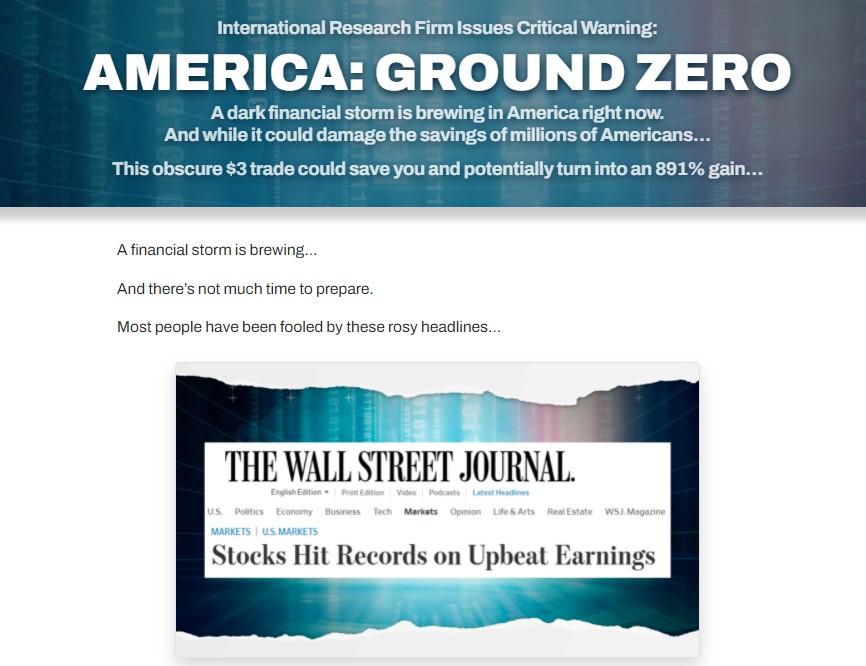 He says that the new crisis that we are about to witness will be far different and much worse than the Dot-Com crash of 2000 or the Great Recession of 2008 and no amount of money printing will fix it.

We’ve seen this kind of prediction before in other presentations I’ve reviewed here before like The Great Devastation of 2021 and The Next Phase of the Collapse Of 2021 by Martin Weiss.

So, what is Nick Giambruno talking about when he talks about an “imminent Category 5 financial hurricane” and why does he think America is ground zero for this crisis?

Here is how he describes it in the pitch:

“I expect chaos will spread out to every corner of the U.S. economy.

Stocks, currencies, and commodities will thrash up and down.

And millions of Americans will see their savings damaged.

None of that wealth will “disappear.”

Instead, a massive wealth shift will be set in motion.

To investors who DO know what to do.”

Nick draws parallels between the Global Financial Crisis of 2008 and the current financial situation in the country. He says that what stands out for him is the fact that we have too much money circulating in the economy that is offering reprieve and papering over the cracks of a dire situation.

Comparing the stock market now to the scenario during the Great Depression in the 1930s, he says that the Coronavirus market crash was just a correction that was followed by a rise that will then be followed by a huge, abrupt fall. 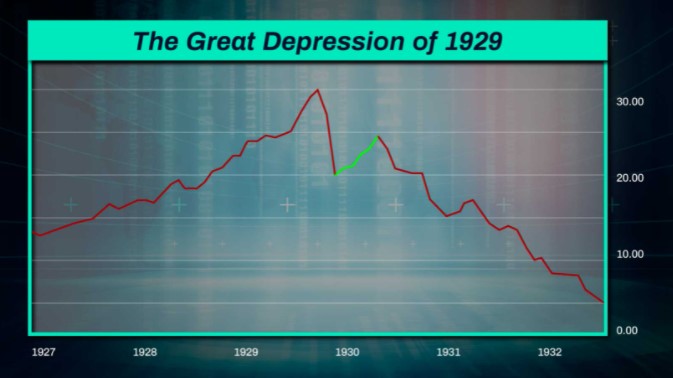 Nick Giambruno then says that that same pattern was observed in 2008 and the nineties.

He goes on to say that the crisis will develop in five stages:

He says that the average Price to Earnings ratio is higher than average, which he thinks is an indicator that the stock market will plunge. 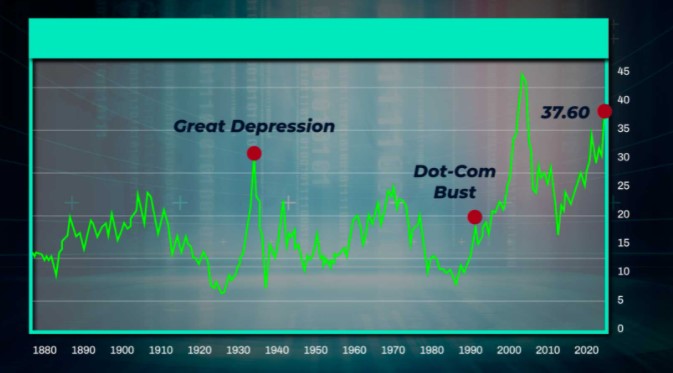 That’s almost THREE times as high as the normal ratio!

The only other times we’ve seen levels rise above 30 was in the Great Depression and the dot-com bust.

He says that people are borrowing money to invest in the stock market (margin debt) at a higher rate than usual and this is a problem. Why is it a problem? Because when stocks drop by just 30%, investors may get a margin call and have to sell their positions, which can cause a crash.

He says that every time the margin debt went above 150%, the market tanked; the current rate is 400%.

Nick Giambruno says that corporate debt is also too high. Again, he compares it to the way it was in 2007 and 2000 when it was at around 44%.

This time, the rate is at 54% and this, to him, is also a bellwether of tough times ahead. He believes that we are about to see “an inevitable debt default” that will plunge the economy into crisis mode.

Nick Giambruno believes that the number of stock buybacks is too high right now. Stock buybacks allow companies to buy their shares and they are incentivized to do it because it raises their stock price.

According to Nick, this could lead to serious consequences in the market because as history showed us in 2000 and 2007, each time stock buybacks increased like that, the market crashed in a matter of months.

Nick Giambruno says that the Tax Cuts and Jobs Act of 2017 that Trump signed into law in late 2017 encouraged record-breaking stock buybacks and allowed tech giants to get away with “tax murder.” 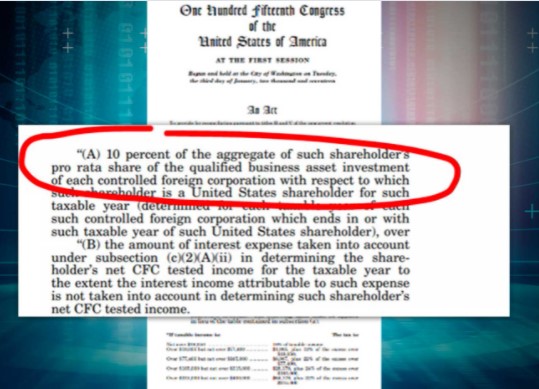 He points to a tax loophole that he believes has enabled Big Tech companies to pay $100 billion less in taxes because they can use offshore tax-havens.

Nick says that Biden will try to fix this by increasing taxes that will hit the big tech stocks hardest and since they are leading the bull market, the NASDAQ will take a huge blow.

How does Nick want us to invest?

Nick Giambruno wants you to invest in what he calls “crisis trades.” Remember, he is a big proponent of crisis investing as this excerpt from the presentation proves:

“… if you make the right moves during a crisis…

You can position yourself to make a lot more money…

Even more than you ever could during a bull market.

Plus, you can do it without touching options, shorting stocks, or anything complicated like that.

Nick Giambruno wants you to invest in gold. He is also a fan of Bitcoin but he prefers gold because it has been around for longer and believes that it will be the go-to source as a hedge against the US dollar.

Nick has pinpointed one $3 “crisis trade,” a gold company that is trading under a new name and that remains unknown to 99.99% of investors. But as the “financial hurricane sweeps America,” he expects its shares to be off to the races.

What more do we know about the company?

“It’s coughed up more impressive gold ore than any other project that I know of in the world.

Plus, it owns a gold resource worth as much as $4.6 billion.”

Nick Giambruno wrote a report about it called Crisis Trades: Your Chance To Collect $99,100 As the Financial Hurricane Sweeps America and says that you can get a copy of it when you sign up for his newsletter, Crisis Investing. 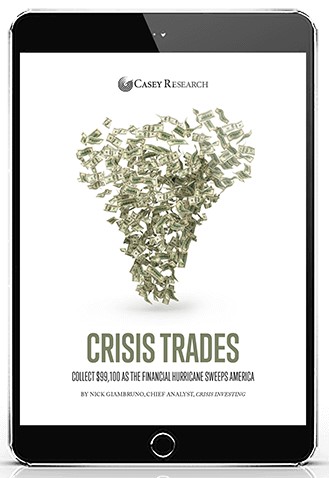 But you don’t have to read that report to find out the name of that company because I think the mysterious company Nick Giambruno is teasing here is Karora Resources Inc. (TSX: KRR).

Karora Resources is a Canadian company that describes itself as “a multi-asset mineral resource company focused primarily on the acquisition, exploration, evaluation and development of precious metal properties.”

Nick Giambruno is the chief analyst of the firm’s flagship newsletter, The Casey Report as well as its premium newsletter, Crisis Investing. He has promoted the latter through presentations like “What Are Lateral IPO?”, “What Is Bitstocks?”, and Reset the US Dollar.

Nick writes about value investing in crisis markets, the cannabis market, geopolitical events, second passports, surviving financial crises, and international banking. He is a proponent for investing “when there’s blood in the streets,” a mantra he borrowed from Baron Rothschild.

He has lived and worked in Europe and the Middle East and is a frequent speaker at investment conferences the world over.

Every month, Nick sends his readers trade recommendations based on financial “storms” so that they can make profits off of those trades.

When you sign up for Crisis Investing, on top of the monthly newsletters, you gain access to:

Silver Spike: The Tiny 70¢ Stock That Could 12x Your Money From The Financial Hurricane

A silver stock trading at 70 cents that owns a silver resource worth up to $1.1 billion, which is more than 12X the company’s market cap.

Eric Sprott has also invested over $1.4 million into this 70 cent-per-share silver stock.

Crisis Investing: The Time To Buy Is When There’s Blood In The Streets

In this report, Nick explains how legendary investors like Warren Buffett, Sir John Templeton, and Jim Rogers used the idea of crisis investing to become rich.

The Financial Hurricane of 2021: How You Could Make 1,221% Gains During This Unprecedented Crisis

In this dossier, Nick Giambruno discusses an asset that he says some investors are banned from investing in. He says that the gains have the potential to be sky-high and there is a phenomenon that occurs every four years behind it. 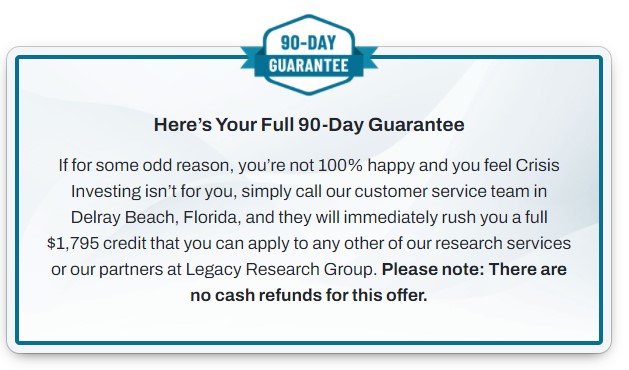 What they have instead is a 90-day grace period during which you can cancel your membership to get $1,795 credit that you can apply to any other research service from Casey Research or the Legacy Research Group (Palm Beach Research Group, Rogue Financial, and Brownstone Research).

Nick Giambruno’s America: Ground Zero presentation is about a looming financial crisis that he expects to happen in the not-so-distant future. He goes all-in on this and says that the only way to prepare for it is to invest in gold or other precious metals.

As much as Nick Giambruno touts the successful stock picks that Casey Research has doled out in the past, he acknowledges that all investing carries risk and past performance does not guarantee future success. Therefore, as you consider investing in his “crisis trades,” bear that in mind.