Michael Robinson, a tech investment analyst at Money Map Press, did a presentation where he claims that you can claim a portion of $4 Trillion in New Global Wealth This Year by making certain investments.

He was talking about investment opportunities in the biotech sector, focusing on two tiny companies that he says have made groundbreaking discoveries and could be poised for exponential growth.

In this article, I give you an overview of the hour-long presentation where I highlight the main talking points, including the main investment opportunities he is teasing. I also walk you through the newsletter service that Michael is pitching.

What is $4 Trillion in New Global Wealth This Year?

Michael Robinson believes that the biotech industry may add $4 Trillion in New Global Wealth This Year. And that will be driven by two companies: one that is revolutionizing drug discovery and slashing the costs involved and another that has cornered the mRNA vaccines market with its ingenious discovery. 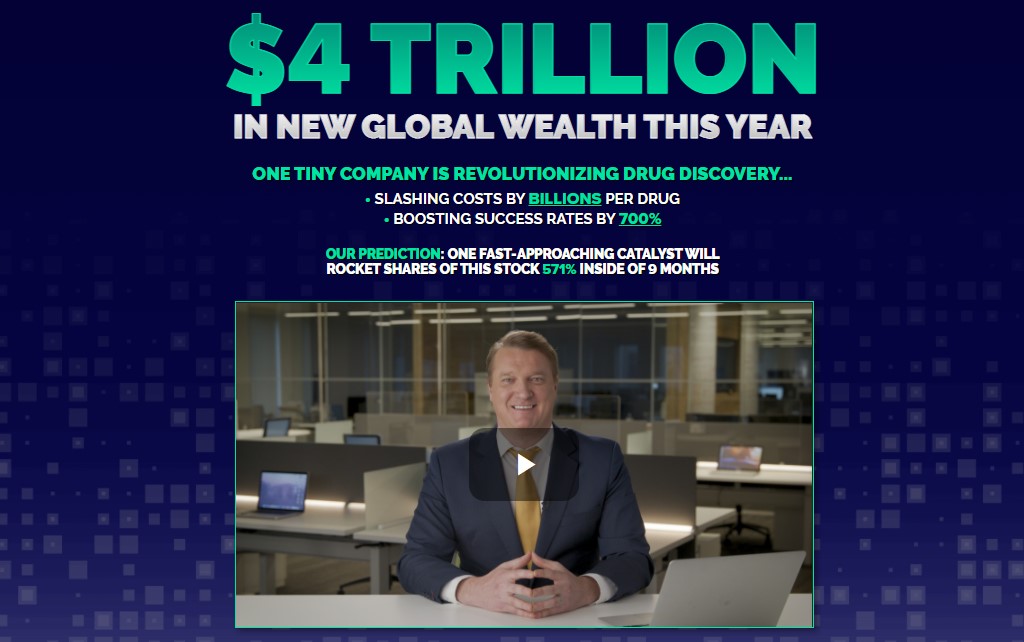 Michael has identified a tiny company that he expects to revolutionize the drug discovery process using Artificial Intelligence (AI). It has a cutting-edge neural network for modeling new therapies.

He says that its breakthrough will allow pharmaceutical companies to slash the costs of developing new drugs by the billions.

On top of that, the discovery processes will also be more efficient. He estimates that the success rate of drug development can be boosted by 700%.

Why is any of this relevant?

Coming up with new drugs is the biggest problem that pharmaceutical companies grapple with. It is often inefficient and slow and companies usually invest up to 30% of their budgets on R&D.

And that’s where this tiny company comes in:

It is solving the top problem that all pharmaceutical companies face – how to design new drugs quickly and successfully for clinical testing.

It has figured out a way to develop new drugs faster, cheaper, and with a higher rate of success than other players in the industry.

This, according to Michael, will save millions of lives in the future and make medicine affordable for ordinary folk.

Owing to its successful drug discovery process, it has partnered with the world’s top 30 drug companies including big pharma players like Pfizer and Johnson & Johnson. It doesn’t stop there because its tech will potentially be used by thousands more companies around the world.

As of releasing the presentation, it had more than 1,250 clients in more than 70 countries around the world.

Besides revolutionizing drug manufacturing, this tiny company has become a key player in the COVID-19 Alliance. Michael says that it has made a huge breakthrough in developing an antiviral therapy for COVID-19.

It has also been working on six cancer drugs that will be in development as early as this year.

With all these factors elevating it, investors like Bill Gates and David Shaw have invested more than $1.2 billion in this company.

And with all that working for them, Michael expects their revenues to increase by almost tenfold over the next five years – from around $100 million to almost $1 billion. He says that it can easily translate into a blockbuster 744% increase in their share price.

The second biotech company he talks about owns the gold-standard delivery technology for mRNA vaccines.

Michael believes that mRNA therapies such as the ones that were used in COVID-19 vaccines are the future of medicine.

The second company on his radar has developed a mechanism that allows mRNA therapies to have a longer shelf-life because it creates a “forcefield” around the molecules.

The vaccine delivery technology it owns is ahead of all the others and it is enabling mRNA therapies to be three times more effective, 70% more efficient, and cost 60% less than their rivals.

Michael says that their product has attracted a long list of clients (more than 400), including the world’s top 20 pharmaceutical companies. This includes Pfizer and BioNTech whereby these companies have selected their technology for each of the four billion COVID-19 vaccines they are rolling out in 90 different countries by the end of next year.

With all these clients buying up its product, this company can bring in up to $2.4 billion.

And it gets better because according to Michael, COVID-19 vaccines are just the tip of the iceberg because over 40 different companies are using this tiny company’s tech to develop mRNA therapies for other diseases like cancer and heart disease.

With everything that is happening around this business, Michael expects its stock price to surge 571% by the end of 2022.

To learn more about these two companies, you have to read the digital investment dossiers Michael wrote. They have a comprehensive breakdown of everything you need to know about the two companies including a special video presentation from Michael and his team with a full breakdown of the two stocks.

That includes details on their rock-star management team of scientists and C-suite executives, and a full analysis of their revenues, competitors, and extensive patent portfolios.

All the important details from the presentation as well as step-by-step instructions on how you can invest in each company are in the report.

To get the report, you have to sign up for Michael Robinson’s Nexus-9 Network.

Who is Michael Robinson?

Michael A. Robinson is a technology investments analyst who has been working in Silicon Valley for 37 years.

He has worked as a consultant, senior adviser, and board member for Silicon Valley venture capital firms. This has given him access to pioneering CEOs, scientists, and high-profile players.

He is also a regular guest and panelist on CNBC and Fox Business and is also a Pulitzer Prize-nominated writer and reporter. He warned people about a financial collapse in his book “Overdrawn: The Bailout of American Savings.”

Of late he has been focusing on the biotech industry. He is fascinated by how medical breakthroughs that once took years to develop are moving at a record speed. He launched the Bio-Tech Profit Alliance to share his insights.

Other publications he heads up are Strategic Tech Investor, The Nova-X Report, and Nexus-9 Network.

Michael created it to give individual investors the chance to profit from the most cutting-edge biotech investment opportunities.

The newsletter exposes you to countless opportunities with world-changing potential. Each week, Michael and his team share details on the tiny, little-known companies whose breakthroughs could disrupt the entire industry, sending their stocks to the moon.

For example, Michael has been tracking developments in new therapies for PTSD and Alzheimer’s diseases. He has identified three companies whose new drugs are at the advanced stages of human trials and may get full FDA approval.

Michael has been targeting companies like Novavax – which soared by 7,684% in less than a year driven by its new COVID-19 vaccine, 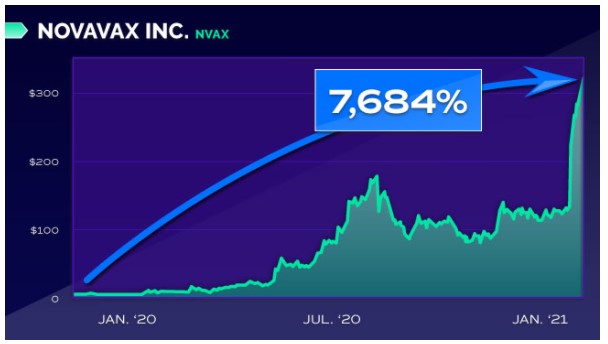 Cardiff Oncology – which spiked by 2,988% in six months after announcing impressive data of its new cancer drug trials, 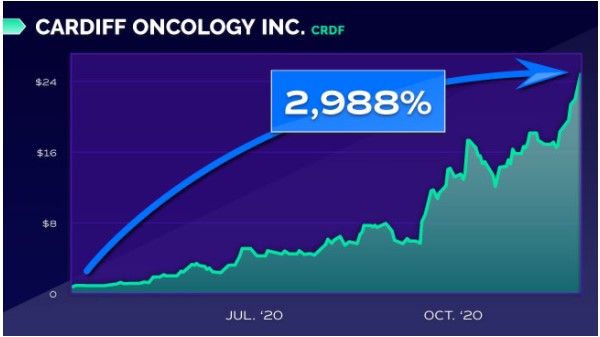 And Genprex, which soared 2,149% in 11 months after the FDA fast-tracked its new therapy for lung cancer… 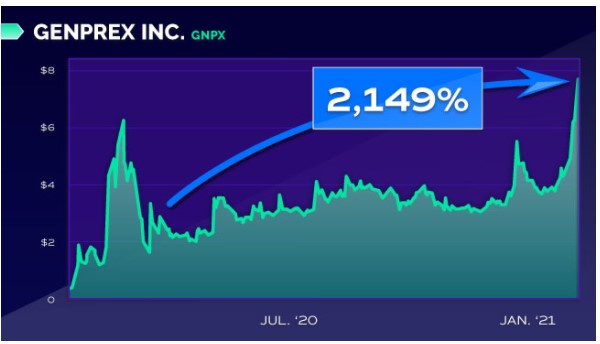 These examples are rare cases that don’t happen every day. However, their potential is there.

He does not just focus on the biotech industry. He also seeks disruptive trends in the wider tech world. He finds innovations that are reshaping the tech landscape and creating explosive investment opportunities.

He writes about blockchain, robotics, cloud computing, big data, electric vehicles, and other industries that may see rapid growth in the coming months and years.

His goal is to get you in on the most exciting ground-floor tech opportunities before the wider market catches on.

What is included in Nexus-9 Network?

When you sign up for Nexus-9 Network, you receive:

The subscription fee is Non-refundable.

As he was promoting his newsletter, Nexus-9 Network, Michael Robinson was talking about investing in the biotech sector – he clarifies that the newsletter also spans other companies in the technology sector.

He is teasing two relatively small biotech companies and says that they have made breakthroughs that could trigger an increase in their share prices. Both companies have a long list of big clients and Michael thinks it is only a matter of time before they become big companies.

When it comes to investing in biotech stocks, you should understand that they are cyclical. The pandemic ushered in a sharp spike in their values as investors sought to take advantage of the returns that they would make on the back of a vaccine rollout.

But in 2021 and the first month of 2022, biotech stocks collapsed 25% and 20% respectively. Experts say that this situation may turn around.

On top of that, although as a collective they have lost value, there are individual stocks that have done well. So, it is all relative.