Mike Carr’s Next Trading Revolution is a webinar about a new investment strategy that Mike has developed and is sharing with the public for the first time.

It has to do with a decision by the SEC to approve options trading on a well-known asset last year for the first time, a decision that he believes has unlocked the full power of his strategy.

Let’s examine what Mike Carr is referring to in his presentation.

What is Mike Carr’s Next trading Revolution?

Mike Carr is an investment analyst who works for Banyan Hill Publishing. He edits a newsletter called One Trade (paid for) and in a recent move to promote it, hosted a webinar talking about a new approach to investing he’s come up with.

One Trade, you see, is a newsletter that focuses on options trading, a specialty of Mr. Carr. 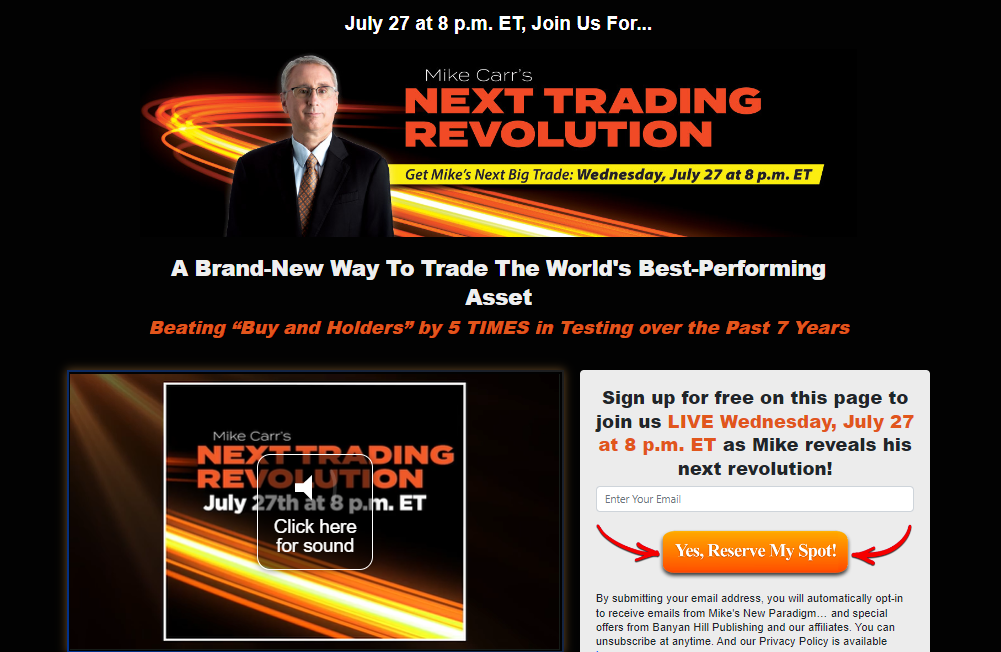 His key strategy since 2018 has been to focus on just one ticker, the SPDR S&P 500 ETF (SPY). He trades options on the ETF and claims that for that reason, his strategy works in both bull and bear markets.

In case you are unfamiliar with it, the SPDR S&P 500 trust is an exchange-traded fund that was launched in 1993. SPDR stands for Standard & Poor’s Depositary Receipts, the name previously used to refer to the ETF. It tracks the S&P 500 stock market index and is the largest and oldest ETF in the world.

But now he has found another way to make money, and it has to do with an SEC ruling.

Mike Carr says that late last year, the Securities and Exchange Commission (SEC) issued a surprising rule that makes sure markets operate fairly. He says that the rule took him by surprise.

He realized that the SEC decision created a huge opportunity and within months, he had a system to exploit it. After back-testing his system with data going back seven years, he found that it would earn him gains of 43,000%.

However, he figured that his system could perform even better if he used leverage.

So, what decision did the SEC make that excited Mike Carr that much?

The agency approved the ProShares Bitcoin Strategy ETF (BITO), the first bitcoin-linked ETF. It’s just like any other ETF or stock — individuals can trade bitcoin without a digital wallet.

After that decision, traders poured money into BITO. Market makers hedged risks in the futures market, and realized there was enough liquidity to offer options on BITO.

Now that investors can trade derivatives, they can profit both when Bitcoin goes up and down and according to Mike, this gives such traders an advantage over buy-and-holders of Bitcoin because the crypto tends to experience deep, frequent bear markets.

He says that it is like the SEC finally allowed the little guys to trade the short side as well (something he claims only the rich Wall Street investors were previously allowed to).

Having found out that people could trade derivatives, Mike Carr created a strategy that earns you better returns than buying and holding bitcoin, while slashing the risk by 80%. He says that it took him months to create it.

A backtest of this strategy turned a starting stake of just $2,500 into $1 million in seven years, a 43,000% return without leverage.

He says that it beats the return of Bitcoin over the same period by a factor of 5.

With derivatives in the mix, he thinks the gains are likely to be much higher. For example, he says that a recent trade he made turned a 10% rally in bitcoin into a 100% gain in two days.

Who is Mike Carr?

Michael Carr is an investment analyst who works for Banyan Hill Publishing. He is a veteran of the U.S. Air Force.

Before he joined the world of investment, Michael Carr started his career at the Pentagon, where he played a part in installing an early version of the modern-day internet. He then moved to Iceland, where he deployed state-of-the-art radar systems to track Soviet aircraft. This was during the Cold War.

He was a part of a couple of other high-profile missions in the military, including coding nuclear missile launches.

Mike is a contributor to True Options Masters every Tuesday and Friday, where he provides his technical analysis and shares a macro perspective on market events. He also contributes to the Journal of Technical Analysis, MoneyShow, SFO Magazine, and Futures Magazine.

He’s written two books, namely Smarter Investing in Any Economy: The Definitive Guide to Relative Strength Investing (2008) and Conquering the Divide: How to Use Economic Indicators to Catch Stock Market Trends (2010).

He edits three newsletters at Banyan Hill Publishing. They are Precision Profits, One Trade, and Market Leaders.

Mike Carr’s Next Trading Revolution: the New Paradigm is an event where Mike introduced his audience to his new trading strategy.

It entails trading options on the Bitcoin ProShares ETF (BITO) — the first and only optionable bitcoin ETF available on the public markets.

Mike believes that when you trade options, your risk is capped at the amount you put in each trade because you cannot lose in the negatives but your potential gains, due to the power of leverage, are exponential.

He says that this gives would-be buy and holders a safer, more lucrative way to profit.

The webinar gave Michael a chance to showcase his new trading strategy that would make the most out of bitcoin’s volatile moves.

To conclude, although Mike Carr is upbeat about his new strategy, always bear in mind that investing in the options market is still quite risky no matter how he paints it.