Have you come across the Monument Traders Alliance but have no idea what to make of it?

Well, you are in luck because I have been taking a closer look at it and the services it offers.

Besides, having recently reviewed its flagship advisory service, The War Room, I think it’s about time I review the publisher.

In this article, I will provide you with an overview of what the Monument Traders Alliance entails, a background of the people who run it, and the trading strategy that it is built on.

What is Monument Traders Alliance?

Monument Traders Alliance is an investment publications platform that was launched by Bryan Bottarelli and Karim Rahemtulla to give investors the tools they need to invest “smartly.” 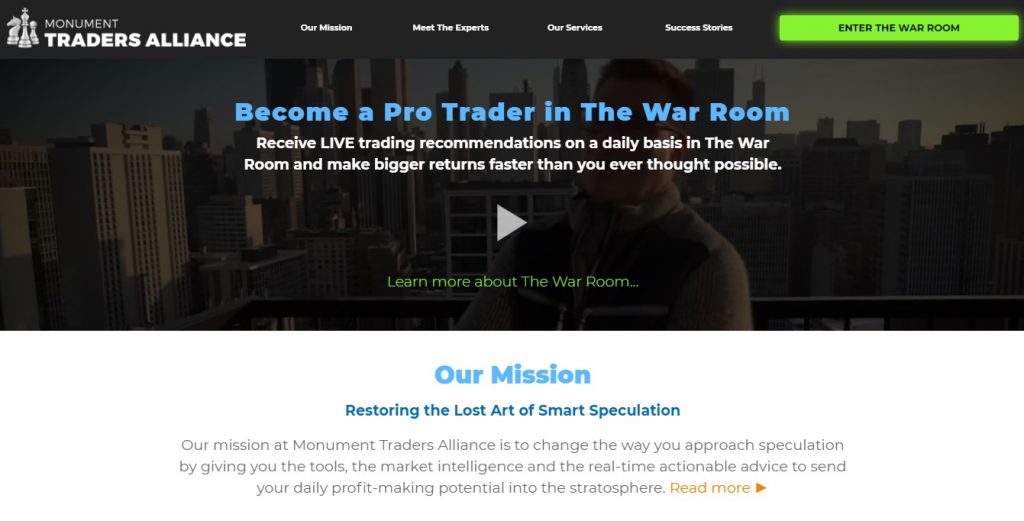 Here is an excerpt from the mission statement to that effect:

“Our mission at Monument Traders Alliance is to change the way you approach speculation by giving you the tools, market intelligence and real-time, actionable advice to send your daily profit-making potential into the stratosphere.”

They acknowledge that the typical investor has 90-95% of their portfolio allotted to “boring” low-risk investments that earn a modest return.

So, their goal is to help you make the most of the remaining portion of your portfolio with smart but risky investments that may generate higher returns.

The mission statement goes on:

Here at Monument Traders Alliance, we’ll help you put the remaining 5% to 10% of your wealth to work – speculating intelligently.”

In a nutshell, they are promising to help you speculate.

In the world of investments, speculation means investing in securities that have a high risk while expecting to earn big returns.

When you speculate, you attempt to take advantage of price fluctuations of the security to earn a disproportionately high return.

When trading is involved, it can be hard to distinguish between investment and speculation but according to how Bryan and Karim describe it, investment typically yields lower returns and you keep your positions open for a relatively long period.

Speculation, on the other hand, involves relatively shorter holding periods.

How they speculate at Monument Traders Alliance

Bryan says that although their recommendations carry greater risk, they don’t encourage their clients to trade recklessly. Here is how they describe their investment strategy:

“A big part of smart speculation means being properly positioned ahead of time for a future market move. There’s no point hearing about all the ‘big winners’ on CNBC after they’ve already run up. We want to be the ones buying ahead of the hoopla surrounding a newsworthy move or event. If your trade is executed properly – and your speculation hits – you’ll be the one cashing in when other traders are just hearing about the payoff.”

They don’t reveal how they do that on the official website, but you can learn more about it from their presentations.

For example, in his Overnight Trades presentation, Bryan claims that he has a three-step system to spot stocks that are likely to go up overnight. Then, when you place your trades right before the market closes, you can earn a return when the market reopens the next day.

In that instance, he recommends that you trade the options that are linked to those stocks.

In another presentation titled Corona Crash Emergency Summit he put out amid the pandemic, he was also claiming that you should invest in options to earn returns in a short period.

Bryan Bottarelli graduated with a business degree from Indiana University and had his first job working on the floor of the Chicago Board Options Exchange. He worked under some of the top traders in the country at the time, during the tech boom of the late nineties.

He executed his trades in real-time and learned most of the trading secrets that later informed his trading strategy.

When he left the CBOE, he started his independent trading research service, Bottarelli Research. Between 2006 and the end of 2018, he advised a small group of investors on the best investments by sharing precise trading instructions with them.

Who is Karim Rahemtulla?

Karim Rahemtulla is the Head Fundamental Tactician at Monument Traders Alliance. A native of England, he became one of the youngest CFOs of a brokerage firm that cleared through Bear Stearns in the late eighties.

It was there that he sharpened his trading skills, learning from the veterans. He picked up on the strategies that they had taken years to perfect.

He later co-founded a publication called Wall Street Daily for which he was also the chief options strategist. He mainly advised members to sell puts.

As an editor of another publication called Automatic Trading Millionaire, he claims that he never registered a loss out of the 37 recommendations he made over 18 months.

He credits this to his astute risk management strategy whereby he holds off on investing until the risk and rewards are well-defined.

He has written a book about investing in global markets called Where in the World Should I Invest?

What is The War Room?

Although Monument Traders Alliance offers a daily e-letter called Trade of the Day, The War Room is the main investment advisory service.

I have written an in-depth review of the War Room (that you can read here), but I will give you a quick rundown of what it is all about.

The War Room is a live trading recommendation service through which Bryan and other traders share investment insights.

The trades come thick and fast and you don’t have to invest a lot of money. It is a fast-paced system and you will typically keep your positions open for a day or two, if not a couple of hours.

Monument Traders Alliance is an investment advisory publishing firm that is run by Bryan Bottarelli and Karim Rahemtulla. They encourage their clients to dedicate a small portion of their portfolio to “smart speculation,” which they help with.

Although we’ve seen that speculation can deliver, Bryan admits that these investments don’t always pan out. Sometimes, you can lose all your money – which explains why you should only dedicate a small portion of your portfolio to these trades.

From what I have seen him say in his presentations promoting the services he offers, Bryan mainly recommends options trades. And it makes sense because they offer significantly higher returns and they are suited to a short-term trading strategy.