Jeff Siegel just released a presentation with the heading This “Molecule 520” Changes Everything.

In it, he claims to have discovered a molecule that will cure many illnesses and medical conditions and potentially bring in 70,000% gains to investors.

Seeing this, I decided to take a closer look at the pitch to see what this “Molecule” is and why he is touting it so aggressively. In this article, I will summarize the presentation and reveal what “Molecule 520” really is.

I also reveal the names of some of the companies he is touting if you are interested in them.

Molecule 520 is the title of a presentation by Jeff Siegel promoting his investment advisory service, Green Chip Stocks.

But there is more to it than that because he also spends a majority of it talking about “Molecule 520” as some form of miracle cure that cures an array of ailments and addictions.

He sees it as a discovery that is “revolutionizing medicine as we know it.”

Throughout the presentation, he namedrops a couple of illnesses, addictions, or conditions that “Molecule 520” alleviates based on studies by scientists at some top research institutions:

“Studies underway at places like Harvard, Johns Hopkins, and Stanford are showing this new treatment is effective against other deadly chronic diseases that affect millions…

Those are just a few of the ones he mentions and suffice to say, it is a long list.

Moving on, he says that the FDA is on board with “Molecule 520” as a potential therapy:

“It’s got the Food and Drug Administration’s backing.

The FDA — the ultimate judge of safety and effectiveness for medical treatments — has awarded this new medicine ‘breakthrough status.’”

Investments from various sources, including pharmaceutical companies, venture capitalists, and other noteworthy investors are flowing in to fund the research:

“Both Big Pharma and tiny startups are spending billions on research and development, with several drugs already in Stage 2 trials…

And Key private companies that are facilitating the development of “Molecule 520” medicine are also planning to go public:

Offering anyone who gets on board now the chance for our next round of triple- and quadruple-digit profits.

If fact, some say the little-known company that just filed for its IPO could be the next “unicorn”… a startup worth $1 billion.”

In a nutshell, “Molecule 520” is a revolutionary cure that can cure an array of illnesses, has the backing of scientific research, major investors, and the FDA, and presents you with the opportunity to make money if you invest in the right companies.

Jeff went ahead and wrote two reports to help with that:

Unfortunately, Jeff doesn’t tell us what “Molecule 520” really is but after doing some research, I am pretty sure that I know what it is.

“Molecule 520” is a name Jeff coined to refer to psychedelics.

“Psychedelics are a hallucinogenic class of psychoactive drug whose primary effect is to trigger non-ordinary states of consciousness and psychedelic experiences via serotonin 2A receptor agonism.”

Examples of Psychedelics include

Psychedelics are illegal federally but scientists have been testing them to determine whether they can be used as focus and addiction treatments. FDA has even given Psilocybin a “breakthrough” designation.

How do I know Jeff was talking about psychedelics?

Remember how he started the presentation by talking about a guy called George Johnson who recovered from alcohol addiction “after two sessions with this breakthrough treatment”?

Jeff published an article on the Energy & Capital website in October (2020) where he wrote about using psychedelics to treat addiction “in a matter of days” (and the investment opportunities this creates).

The second clue/confirmation comes from Kevin O’Leary, one of the panelists on Shark Tank, whom Jeff quotes in the presentation saying:

“This could save lives, cure depression, help alcoholism, get people off opioids — why wouldn’t I want to be invested?”

This tweet by Kevin O’Leary from Dec 9, 2019, bears the same quote and confirms that Jeff was talking about psychedelics. 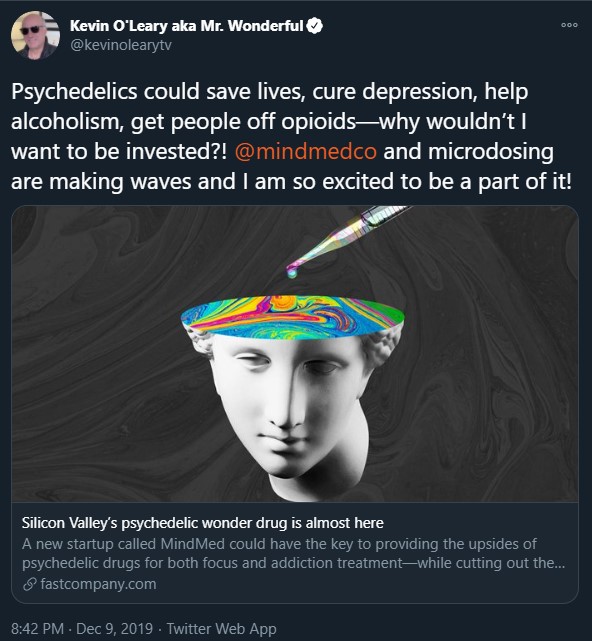 You should read the article he cites as I found it to be very informative on the subject.

That company is Mind Medicine Inc. or MindMed (OTCBB: MMEDF) (MMED.NE). Mindmed has been testing psychedelic drugs’ efficacy as treatments for anxiety and addictions. As I was writing this, it is only listed on Canada’s NEO exchange although it is applying to be listed on Nasdaq.

It fits the description of the first company Jeff touts:

The second and third picks

Unfortunately, the second and third companies are not as straightforward as the first one because Jeff doesn’t reveal enough clues about them to draw meaningful conclusions.

That being said, here is how Jeff Siegel describes the second pick:

“My second pick is a company that has already launched a complete production, packaging, sales, and distribution program for approximately 300 applications of the Molecule 520.

Though it’s still a small, young firm by most standards, over the last two years, its stock performance has blown past the S&P 500 by almost 800%!

It already has the essential infrastructure in place to get a “running start” as Molecule 520 drugs come to market.”

The third one was described as follows:

“Finally, you’ll get the name of my third pick, the only legitimate pick-and-shovel play in the space.

The company is actually an agricultural technology firm, but it’s created a one-of-a-kind technology that produces the Molecule 520 cheaper, faster, and in higher quantities than its competitors.

This innovation cuts labor costs by 235%, increases profitability by 25%, and will be key to helping keep up with the exploding demand for the Molecule 520.

It’s a game-changer of epic proportions, and the company is now gearing up to be the production technology of choice for what could soon be hundreds of Molecule 520 producers.”

I suppose the only way to know what their names are is by reading the report (Three Magic Molecule Picks for Quadruple-Digit Gains).

Private companies that work with psychedelics

There are a couple of private companies that manufacture psychedelic-based cures that Jeff has been writing about in his column on the Energy & Capital website. They include:

These companies are not in the report but I think they are worth mentioning.

Jeff Siegel has been an investment guru and a professional trader for 30 years. He works for Angel Publishing, which is behind Topline Trader.

He is a bestselling author and the editor of a publication called Green Chip Stocks. It centers on investments in alternative energy, legal cannabis, and organic agriculture.

“Green chip companies” are businesses that take part in socially responsible practices and are typically part of environmentally friendly industries.

Jeff has also appeared on TV as a market commentator to talk about the “world-changing technologies” that he often writes about to his newsletter subscribers. This is in keeping with his trading strategy of investing in those technologies before they go mainstream.

To uncover them, he spends his time visiting sites and talking to personnel on the ground. He claims that this approach has enabled him to be one of the first analysts to call the boom in alternative energy.

What is Green Chip Stocks? (The Newsletter)

To gain more insights from Jeff Siegel, you have to invest in his newsletter, Green Chip Stocks. As I mentioned earlier, the research he publishes focuses on organic agriculture, legal cannabis, and alternative energy.

He also looks at companies on the verge of breakthroughs in the healthcare industry:

“As a Green Chip Stocks member, I’ll keep you in front of cutting-edge developments.

You’ll have advance intelligence that will help keep you ahead of breaking news on new drug developments and new companies about to IPO.”

A good example of this in action is the companies he is touting in the presentation. They are working on a breakthrough cure for multiple illnesses and, as we have seen, some of them are not public companies yet.

That being said, as a Green Chip Stocks subscriber, you should expect to receive:

How much do you pay to join Green Chip Stocks?

You can join for $99 for your first year or pay $179 for a two-year subscription. It renews every subsequent year automatically unless you cancel it.

Does Jeff offer refunds if you cancel your subscription?

If you cancel your membership within the first 6 MONTHS of joining, you are entitled to a full refund.

“Molecule 520” is a presentation by Jeff Siegel about investing in companies developing psychedelic-based treatments for various ailments.

Unfortunately, the laws are still restrictive because psychedelic substances are still classified as Schedule 1 drugs under the Controlled Substances Act. Therefore, they can only be taken in a medical office where a doctor will monitor the user and leave no room for abuse.

However, all is not lost because Marijuana, though a Schedule 1 drug, has been legalized in a couple of states where it is sold as a therapeutic. And as we speak, pot stocks are generally considered potentially lucrative investments.

Jeff Siegel hopes that psychedelics will follow the example set by Marijuana.