Wondering what Mental Netflix is all about?

When Alex Koyfman encountered a new technology that wowed him, he endeavored to find out how he could invest in the company behind it. That’s how the presentation about Mental Netflix came about.

After analyzing his presentation, I wrote this article pointing out the main points Alex raised in his pitch and reveal the name of the company he is teasing.

What is Mental Netflix? (The Pitch)

Mental Netflix by Alex Koyfman was meant to both promote his newsletter – Microcap Insider – and tease a company that is making a device that he is referring to as “Netflix of the Mind.”

He also says that the device is “world-changing” and that it “works with the human body like nothing that has come before.”

It is a wearable device that has pre-loaded settings that allow it to stimulate any sensation, emotion, or feeling by applying electromagnetic waves. It doesn’t cause any permanent changes to the body as it does that. It is controlled through a smartphone app.

The technology it uses was developed as experts were working on a therapy for brain tumors. Koyfman says:

“It has shown great promise by stimulating the brain to trigger natural responses from the body itself, a brilliant departure from traditional medicine that seeks to intervene by using external forces — namely chemicals and surgery.”

The company behind this is Emulate Therapeutics, Inc. It has invested $70 million and 15 years of research into the project and has over 30 patents. You can read about the device they have been working on here.

Koyfman says that Emulate Therapeutics approached a young guy who decided to co-opt the technology meant for the medical device into the gadget he calls “Netflix of the mind.” The company he runs is the one Alex is teasing.

What does the technology do now? Alex explains…

Movies and TV shows that are augmented to create sensations to go with the images.

Video games… music… just about anything that engages the senses can be enhanced with this technology.

Or it can be used on its own to induce a variety of sensations from a library that will be grown and developed through creative collaborations with some of the world’s best-known and most talented content creators.”

The company developed a wearable band that delivers and controls electromagnetic signals. It looks like this: 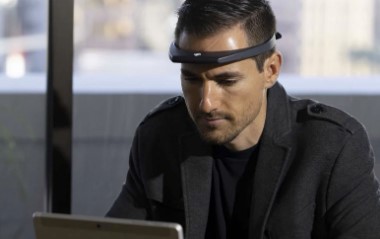 What of the company that is working on the device?

Alex says that it is worth $20 million although it could easily rake in $4 billion per year in sales once it starts producing the flagship product.

The company he is talking about is Hapbee (OTCMKTS: HAPBF). It is a Canadian wellness company that develops a wearable that it describes as one “that lets you feel calm, alert, focused, relaxed or sleepy on command – all with just a few taps on your smartphone”

The wearable is powered by the ultra-low radiofrequency energy (ulRFE) technology that was developed by Emulate Therapeutics.

Hapbee started trading on the OTCQB towards the end of January 2021.

Alex Koyfman is an investment analyst who doesn’t regard himself as the “typical investment ‘guru’” because he has never worked for a Wall Street bank or hedge fund.

He has been in the finance industry for almost two decades and he started as a self-taught trader in his late teens. In his 20s, he turned his hobby into a career and now offers investment advice to his readers through his advisory services.

He travels the world in search of investment opportunities “few ever hear about” and has traded on the Canadian, European, and American exchanges.

He joined Angel Publishing in 2014 and he started publishing an advisory service called Microcap Insider through which he reveals the best way to get rich using penny stocks.

What is Microcap Insider? (The Newsletter)

Microcap Insider is the financial newsletter that Alex publishes at Angel Publishing. The strategy by which he runs this service is to find small companies – microcap stocks – that are working on something potentially revolutionary and getting in on it on the ground floor.

When you sign up for it, besides a free copy of the aforementioned report, you also receive:

In addition to the report about Hapbee, he also sends you a few other reports about other companies he is recommending. They are:

How much do you pay to join Microcap Insider?

The subscription fee is $999 for a one-year membership.

It has a 90-day no-risk guarantee.

While Mental Netflix is an advert for Microcap Insider, it also teases a new form of consumer technology that captured Alex’s attention both as an exciting product and an investment opportunity.

Taking the investor’s approach, he compares the potential of the product to take off to the same way that other technological trends have done in the past. He tells us that a company, irrespective of its size, with a great idea can sweep away the competition.

We have established that he is talking about Hapbee, which in February 2020 launched a campaign on Indiegogo to help launch its product and gauge user feedback from early adopters. The campaign was such a success, the wearable was one of the top projects on the platform. As of June 2020, the campaign had presold over 1,600 units.

That goes to show that the product is decent and explains why Alex was so pumped about it. Whether it will end up being a massive success in the future, however, is a whole different story.