I recently came across a presentation released by The Oxford Club concerning Matthew Carr Nexus Technology.

From that, you can tell that it has something to do with a big announcement or event taking place in March and when it gets that specific, usually, there are some stocks involved.

In this article, we will be taking a closer look at the presentation, highlighting the points that stood out for you to decide what to make of everything Matthew proposes.

What is Matthew Carr Nexus Technology? (The Pitch)

However, the discussion centers on what Matthew calls “The Biggest Tech Revolution of the 21st Century.” He says that it will be launched at Noon on March 2, 2021, and it will involve a technology he is calling “Nexus.” 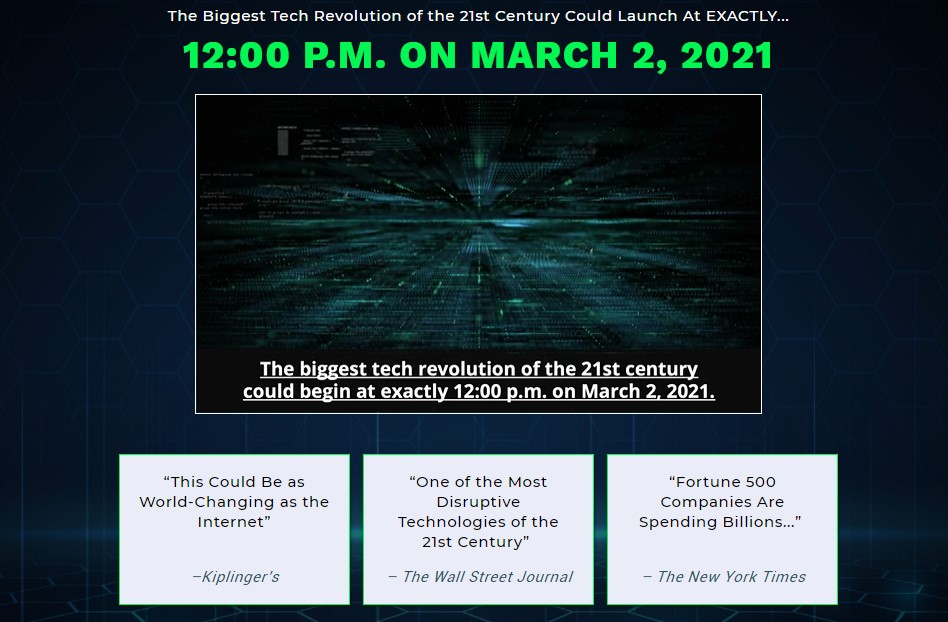 Very early in the presentation, he says that “Nexus” will be “hatched in secret by Silicon Valley elites” and that it could help save one million lives per year, protect the economy against an $8 trillion financial crisis, and creates billions in new wealth.

Before we go any further, let me clarify that “Nexus” is a term Dave uses to refer to the blockchain. To quote him:

It’s my word for blockchain, the HOTTEST tech trend of the 21st century.

I call it ‘Nexus’ because blockchain is essentially a vast network of connections that can’t be broken.”

He expects blockchain to be revolutionary because it will be ubiquitous as we seek to digitize the economy. And by this, he means things like Central banks trying to digitize currencies using blockchain, big banks shifting assets to blockchain-based platforms, just to mention a few.

The blockchain is, as Matthew correctly puts it, a database of transactions. Here is what he says to describe it:

“It’s a database of transactions that everybody can see.

And if anyone tries to tamper with the network and remove a connection, it sets off GIANT red flags.

That’s why blockchain is the safest, most secure, and most transparent way to store information EVER CREATED.”

Now, I should mention that he is not the first investment guru to tout blockchain’s potential as a lucrative investment. We’ve had presentations like ID Coin Technology (Stansberry Research) and The Big Rip (Ian King) that make a similar case for blockchain.

He then goes straight into its uses.

The first one is eradicating counterfeit drugs – he quotes the WHO on this when he says that counterfeit drugs kill one million people each year. When it comes to the implementation, he quotes The Washington Post as having reported that major health companies are teaming up to develop a blockchain-based system for tracking supply chains.

Blockchain has been lauded for enabling people to track transactions to ensure that supply chains are credible, and not just in pharmaceuticals.

Another application of blockchain is protecting people’s identities from identity thieves. Here is how Matthew expects this to be tackled:

“It really comes down to two of blockchain’s MAJOR safeguards. With blockchain… all of your identifying information would be locked behind an ‘unhackable’ code. And any fraudulent purchases would leave behind a digital trail leading police directly to the thief.”

Another application that Matthew mentions is using blockchain to cut out the middlemen who benefit from money transfers and digital payments. These include credit card networks, payment processors, etc. When you build a blockchain-powered digital payment network, you bypass all middlemen.

Matthew made this a key part of his presentation and even has it on the header. So it may have you wondering what event he expects to happen in March that warrants all the fanfare.

This excerpt should help clear things up:

“This event involves an obscure blockchain platform – with a TON of high-profile clients.

These clients ALL rely on the Ethereum blockchain to digitize their operations.

If you haven’t heard of Ethereum, it doesn’t surprise me.

The mainstream media tends to focus on Bitcoin.

But when you compare the two, it quickly becomes obvious that Ethereum boasts the superior blockchain.”

It has to do with Ethereum, and he continues:

“That could all change on March 2… the day I predict we’ll see the launch of Ethereum 2.0.

But – most importantly – it will make blockchain SCALABLE.

We’ll finally have a blockchain that’s powerful enough to support all the applications that could TRANSFORM our society.”

So, it has to do with an upgrade of Ethereum.

Now, this leads us to the moves Matthew wants you to make before March 2. He has every detail you need to know about that in something he calls the Total Blockchain Profit Package whose main briefing is Five Microcap Stocks Making BIG Moves in Blockchain. It has details about five stocks that will benefit from Ethereum’s upgrade.

The first pick is a $2 per share Nevada firm that deals with the problem of food wastage. It makes a blockchain-powered sensor that travels with food pallets collecting data on the food’s freshness. It has 69 patents for its sensor and has partnered with the Canadian Produce Marketing Association, AgroFresh, and United Fresh Produce Association. Its president has worked for Apple, Sun Microsystems, and Wang Laboratories.

The second one is an $8 per share Bitcoin mining company. It recently added 8,000 new processors to its lineup, which could increase its revenue by 114%. One of the members of the board, who is well known in the Bitcoin-mining circles, recently increased his position by buying 368,000 shares.

The third one is a $5 company that is managing digital assets worth $400 million. Its CEO is a former partner at Goldman Sachs and was an ex-hedge fund titan. Bloomberg reported that he put $150 million into blockchain assets in 2017.

The fourth one will revolutionize record-keeping in the shipping industry using blockchain. It traded at lower than $12 a share when they released the pitch.

The fifth one owns 195 patents, many of which have to do with blockchain technology. The shares traded less than $7.

To reveal their names and stock symbols, you have to sign up for an investment research service that Matthew edits called the Strategic Trends Investor.

Who is Matthew Carr?

Matthew Carr is the trends expert at the Oxford Club. He writes a free e-letter called Profit Trends. His premium newsletters include Dynamic Fortunes, The VIPER Alert, Trailblazer Pro, and Strategic Trends Investor.

He is an expert in classic industries like oil and mining and new-age markets like cloud computing, tech startups, 3D printing, and cannabis. He has a knack for finding market trends.

He has close to twenty years of experience in the finance industry.

What is the Strategic Trends Investor? (The Newsletter)

Strategic Trends Investor is an investment advisory service that is run by Matthew Carr. He finds the big trends that are likely to cause exponential growth and reveals them to his followers.

When you become a member of the newsletter, you receive:

In addition to those, you will also receive two reports written by Dave Fessler. They are The Next Tech Giant: The Small Cap Stock Behind the 5G Revolution and The Next Stock of the Decade: Discover the $10 Stock Set to Change the World.

How much do you pay to join the Strategic Trends Investor?

Does the Strategic Trends Investor have a Refund Policy?

With the 365-day money-back guarantee, you can cancel your subscription at any time for a refund.

Matthew Carr Nexus Technology is a presentation that was designed to advertise the newsletter called Strategic Trends Investor – run jointly by Matthew and Dave Fessler.

Matthew gives his opinion regarding the opportunities that will be created by the Blockchain revolution. He has teased several companies that he expects to profit from the revolution and promised to reveal them if you sign up for his newsletter (hence the connection). Unfortunately, there weren’t enough clues to reveal their names as I always do with other teasers.

That being said, Blockchain is an important advancement that will make record-keeping that much more secure and efficient. When it comes to the companies that will be affected by it, I’ll leave it to you to decide whether you agree with Matthew’s assertions.