Charlie Shrem and Matt McCall were recently featured in a presentation titled “The Awakening” Event.

In it, they were discussing what they termed as the most influential event in the world of cryptos, putting it in the same level as the invention of Bitcoin itself, and claiming that it will mint new millionaires.

In this review, I will provide you with a summary of the pitch to enable you to better determine whether you should follow their advice.

What is “The Awakening” Event?

“The Awakening” Event is an event that was hosted by Lauren Sivan featuring Charlie Shrem and Matt McCall where they were promoting Matt’s new cryptocurrency advisory service, The Crypto Investor Network. 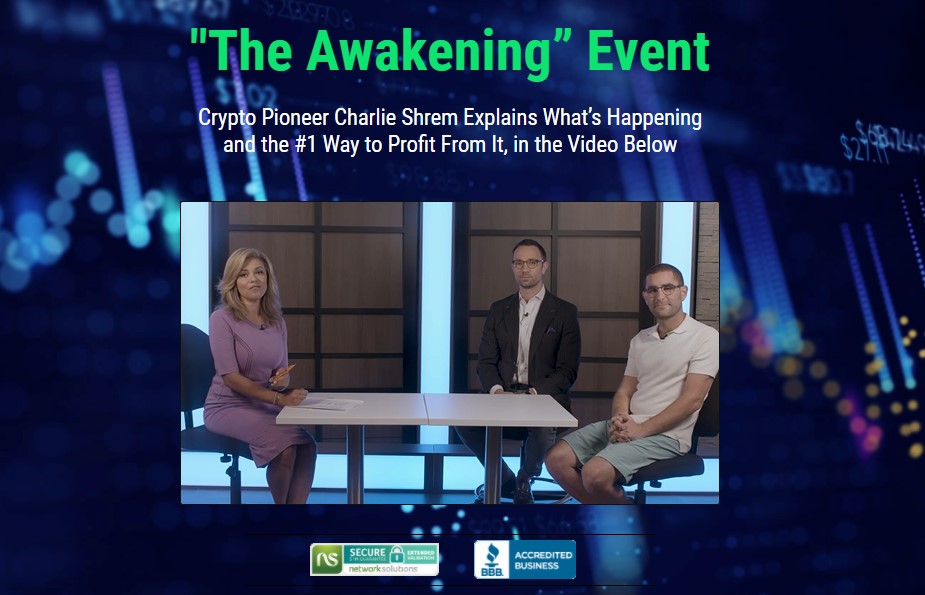 Earlier in the year (2020), McCall released a presentation hyping up another significant event in the cryptocurrency market called the “Halvening” as he was promoting his advisory service, Ultimate Crypto.

But in this one, they talk about what Charlie considers as one of the most important events in the world of cryptocurrencies; an event called “The Awakening” that he claims could provide investors with one of the best investment opportunities in crypto.

In the presentation, they claim that the last time such an event happened, the historic rally in 2017, up to 18,000 millionaires were created – they expect this new event to dwarf that when it materializes.

Charlie doesn’t mince his words when he describes its impact. He says:

It will be the biggest thing since the mass adoption of the internet.”

So, what is this event and why should you care about it?

Put simply, Charlie and Matt want you to invest in Altcoins because they will be subject to one of the biggest wealth explosions when “The Awakening” takes place.

“You see, right now, there’s a fuse being lit under the altcoin market.

This fuse will set off one of the largest explosions of wealth in modern history.

People who invest modest stakes in altcoins could make millions of dollars.”

If you are not familiar with the term, Altcoins is the name given to all other cryptocurrencies that are not Bitcoin. Although they are built on a blockchain, like Bitcoin, they each have separate rules governing them.

Charlie believes that altcoins are arguably the best way to get involved in the cryptocurrency market.

Speaking of blockchain, he believes that it holds the key to the utility of those cryptocurrencies referring to it as a “Transformational Technology Platform.” They even discuss various real-life uses of blockchain.

“The MORE a technology changes the world for the better, the MORE revenue it will generate, and the BIGGER the gains will be for investors.”

“The blockchain mega-platform will surge through the economy and our lives like a multitrillion-dollar wealth-creating tsunami.

It will make us vastly more efficient and more productive.

It will lower the price of just about everything.”

Matt and Charlie say that blockchain will have the same impact (if not a greater one) as the internet, electricity, and the printing press because it will affect all industries:

“Remember: One of the key features of a transformational tech platform is that it doesn’t touch just one or two major industries…

It touches ALL industries.

Its transformational effects make their way into ALL areas of our lives.”

They hail it as the way through which people will reclaim their freedom because it is, by nature, decentralized.

They consider Bitcoin as proof that blockchain technology works and believe that altcoins will be the best way for you to invest in blockchain.

How to pick the best altcoins

Since there are hundreds of altcoins in the market, the biggest challenge is finding the right ones to invest in. Charlie and Matt have a way of choosing what they think are the best ones and their strategy is based on two criteria:

Elaborating the second point about leadership, Matt says that:

“You want to invest alongside founders and CEOs who have successful track records or are very connected to this world.”

To provide their insights to investors, they created an investment research service called Crypto Investor Network. I will cover it in greater detail later in the article but first, let me take a closer look at the two experts behind the presentation.

Who are the people behind “The Awakening” Event?

Charlie Shrem is an entrepreneur who is also one of the foremost Bitcoin advocates. He is one of the founding members of the Bitcoin Foundation, which had the mission of standardizing and promoting Bitcoin. He served as its vice-chairman up until 2014.

Charlie is one of the most recognizable names in the cryptocurrency industry. He began investing in Bitcoin in 2011 while he was still in college and when the exchange he was using to trade crashed, he and a colleague established the now-defunct BitInstant, an exchange that operated between September 2011 and July 2013. By 2013, it was handling 30% of all bitcoin transactions.

Shrem believes that bitcoin will enable citizens to protect their money without using banks and other traditional financial institutions.

Matt McCall is an investment analyst and one of the editors who work for InvestorPlace. He is the founder of Penn Financial Group, an advisory firm that serves all types of investors. He advises his clients about investing in stocks and ETFs where his stock-picking strategy maximizes profits and manages risk.

He began his career 17 years ago working as a stockbroker at Charles Schwab. He learned to use technical analysis to find precise buy and sell points in the stocks and ETFs that meet his criteria.

What is The Crypto Investor Network?

As we mentioned earlier, Matt and Charlie started The Crypto Investor Network to alert investors to profit opportunities in the cryptocurrency market.

During the presentation, they promise to send a report to new members of the newsletter. The report is called The Four Altcoins to Buy NOW for 1,000% and Beyond and it contains information regarding four altcoins that have the potential to deliver massive returns.

In addition to that, you will get:

The newsletter has a 90-day money-back guarantee.

During the “The Awakening” Event, Matt and Charlie claim that altcoins will make a lot of money for many people courtesy of the transformative power of the underlying technology, blockchain.

They correctly point out that blockchain will be adopted across various industries due to its properties, key among them its decentralization, reliability, and security. Its impact on our lives cannot be overstated.

They propose that the best way to make money from the revolution is by investing in altcoins, and not Bitcoin. Altcoins have their upsides, including their high-profit potential, affordability, and low transaction fees.

However, they also have their downsides. The standout ones are their high levels of volatility and susceptibility to fraud and scams.

All in all, the presentation was meant to promote the Crypto Investor Network, an investment newsletter subscription provided by Matt McCall and Charlie Shrem.

It aims to provide you with insights into the best cryptocurrency investments, with a focus on altcoins. So, if you are looking for experts that offer such insights, you can’t go wrong with The Crypto Investor Network.