Matt was interviewed by Lauren Sivan and the conversation centered on a new “super-tech” that is they claimed is so powerful, it will alter the $1.4 trillion energy industry and make oil obsolete in a decade.

In this piece, I will reveal what this technology is, the company he sees as the frontrunner in the new trend, and the opportunities that will arise from it all.

What is New Tech Poised to Kill Oil? (The Pitch)

New Tech Poised to Kill Oil is a presentation that Matt McCall shot to promote his newsletter, Investment Opportunities, and talk about a new source of energy that may overtake oil in the not-so-distant future. 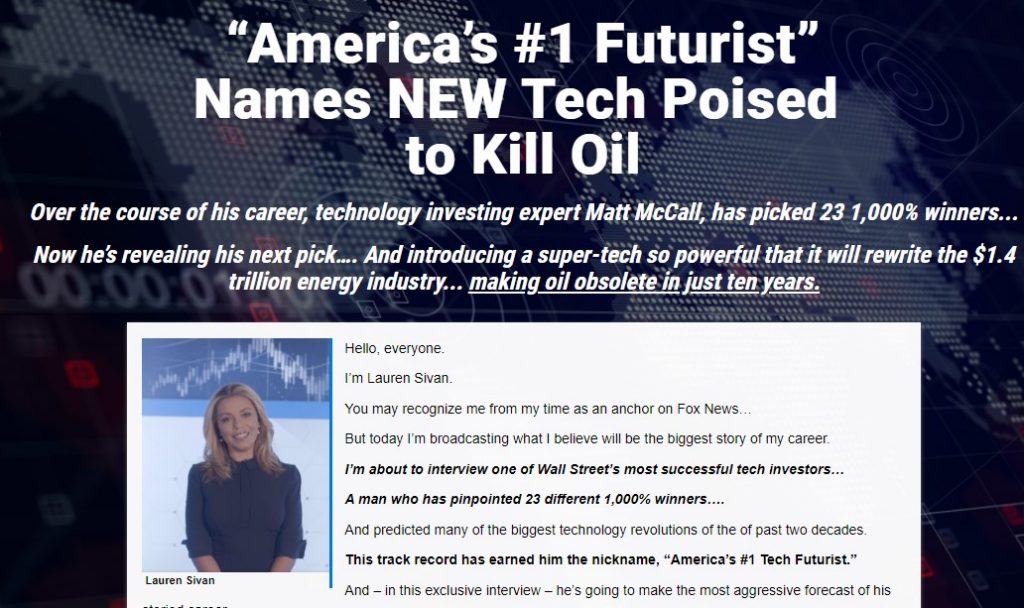 Matt and Sivan have a tiny chip they hold in their hands that they say will “harness power from a completely inexhaustible supply of energy.”

A bit more from the presentation:

“But the truth is, this little device can produce the same amount of energy as oil…

And it can produce that energy at incredibly low costs…

That requires no fossil fuels…

That’s why the profit opportunity here is so huge.

In fact, this technology has proven to be such a force that it has the world’s most powerful oil companies terrified.

Big oil knows that this tech will do more than disrupt their industry.

It will make oil – their lifeblood – obsolete.

That’s why the world’s oil titans have been quietly investing millions into this new technology over the last decade.

Shell has invested up to $2 billion…

We learn that the little device Matt is holding (and talking about) is a polysilicon photovoltaic cell (PV cell) and the inexhaustible energy source he is referring to is the sun i.e. solar energy. And although it sounds odd, big oil corporations are investing billions into clean energy alternatives, one of them being solar, in a bid to transform themselves into energy firms that are less dependent on oil revenue.

He says that the PV cell is a “new solar” that has been made possible by a breakthrough that makes it better than “old solar,” which he describes as “clusters of ugly solar panels on your hippie neighbor’s roof.”

With the new PV cells, he says that solar power is becoming efficient enough to provide cheap energy to the entire world.

How to invest in the New Tech Poised to Kill Oil

Matt wants you to invest in solar energy as soon as you can and he has identified one company that he refers to as his favorite in the industry.

The company he is talking about is SolarEdge (NASDAQ: SEDG).

Why did he choose it? Here is how he explained it in the presentation:

“SolarEdge has become a go-to supplier of hardware for residential solar installations… and the company is already a dominant player in the U.S. solar market….

And it’s well-positioned to expand internationally, with steady three-year revenue growth of 44.3%.”

But then argues that since it is a big company worth more than $13 billion, it could take many years for it to go up 1,000%. This is why he would prefer to invest in smaller companies that will grow faster. We’ve seen this trend before where an analyst likes a household name company but because it is big and thus likely to take longer to earn significant returns, they tell us to go for smaller ones that will ride the wave. In a recent review titled Elon Musk’s SAV Investment Jeff Brown did exactly that when he urged his audience to look past Tesla (TSLA) and focus on a smaller company supplying the EV manufacturer.

Matt McCall has singled out a few companies related to solar power, including:

Unfortunately, he doesn’t give us enough information about them to reveal them – which I always do when possible – and says that you can only learn more about them by reading a special report he wrote called Stocks for the $1 Trillion Solar Revolution.

He is giving it away for free to people who invest in his newsletter, Matt McCall’s Investment Opportunities.

Matt McCall is one of the editors at InvestorPlace – he is the chief technology analyst.

Matt’s specialty is predicting the biggest tech trends, something he claims to have done successfully over the years. For example, he alleges to have called the biggest trends of the past ten years that gave rise to companies like Amazon, Facebook, and Netflix.

What is Matt McCall’s Investment Opportunities? (The Newsletter)

Investment Opportunities is one of the investment advisory services that Matt publishes via InvestorPlace. He reveals technological breakthroughs and advances that are shaping the world.

How much do you pay to join Matt McCall’s Investment Opportunities?

You can subscribe to the newsletter for $49 for one year

Does Matt McCall’s Investment Opportunities have a Refund Policy?

It has a 365-day money-back guarantee. Matt says that the publisher will refund your money if you cancel any time during your one-year subscription.

The new technology poised to kill oil, according to McCall, is solar energy. He says that many big companies and governments are turning to solar because it is becoming cheaper – he acknowledges that they are no longer switching to “go green” or “save the environment.” At the same time, the cells being used to harness the energy is getting better because more money is being invested in research.

That being said, the biggest problem with solar power is the fact that it is an intermittent source of energy and storage is still not up to per. And although experts are trying to remedy it, there is a lot of work to be done.

In the end, investing in solar companies has potential as technology advances and smarter solutions to the storage problem – as well as other shortcomings – emerge. Before you follow McCall’s advice, consider how investing in solar will affect your portfolio and help you meet your targets.