Matt McCall released a presentation talking about investing in solar companies with the title “Four Solar Stocks to Financial Freedom.”

He states that solar energy is cheaper than fossil fuels for the first time in 66 years and this is likely to spark a $53 trillion takeover of the global energy sector.

This article is an overview of the presentation that highlights the main talking points as well as identifying the four companies he is teasing.

What is Matt McCall’s Four Solar Stocks? (The Pitch)

“Four Solar Stocks to Financial Freedom” is the title of a presentation by Matt McCall meant to promote his newsletter by teasing four solar companies he expects to do well. 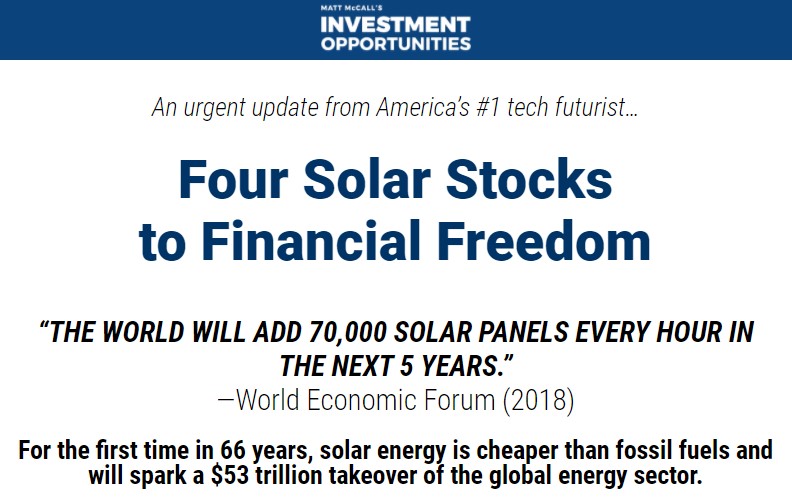 He starts the pitch by claiming to be “America’s #1 tech futurist,” who was among the first people to recommend Tesla, Amazon, Facebook, and Bitcoin. This is meant to make you more receptive to his prediction about solar energy too (and his four picks in particular).

He says that solar energy has been evolving:

“For a very long time, it’s been impossible to harness the full potential of the sun’s virtually free and practically unlimited source of clean energy.

It produces enough to fulfill all of our planet’s needs for nearly 500,000 years.

But solar technology in the past has been too expensive and not even close to being efficient enough to make it a viable energy source.

Or politicians taxing you into oblivion so they can make everything and everyone ‘green.’

I’m talking about a radical breakthrough in technology.

And it didn’t happen overnight…

He correctly points out that solar PV (photovoltaic) technology has come a long way from the first time it was introduced:

“The very first solar cells in the 1800s were too weak to turn on a light bulb.

But today through 66 years of technological advancement, their power has increased by almost 700%!

The “Energy Crossover Point” is what marks the instant at which mass adoption crosses over declining prices; a recipe for rapid growth.

He proves that this shift is underway by pointing out that even oil-rich countries and oil companies have already started to find ways to wean themselves off oil. For example, Shell’s CEO wants the company to undergo an energy transition (to renewables) and Saudi Arabia, one of the most recognizable oil producers, intends to invest $30 billion in renewable energy sources in the next five years.

McCall has identified four companies that he wants us to consider investing in. He clues us in on the first one:

I fully expect this company to be a leading supplier of solar systems as the market is projected to reach $223 billion by 2026.”

He says that it manufactures microinverters, which are used to convert the direct current generated by a solar panel into alternating current.

“Back in 2008, they launched the first-ever microinverter and soon after had a huge market share in the United States…

As solar energy takes off across Europe and Australia, demand for this firm’s microinverters will go through the roof.

And it’s easy to see why…

When you’re the first mover in a multibillion-dollar industry that is set to quadruple in size AND offer a higher quality product than all your competitors, you have the perfect formula for hypergrowth.

That’s what this company has.

Which is why it is the world’s leading supplier of microinverters in the U.S. and has the market in a vice grip…

People have been snatching up shares like crazy. The number of shares being held has exploded since 2010, reaching 142 million as of this year.

And through September 30th that number had reached an astounding $721 million for 2020.

It’s seeing incredible growth. As of this writing, it’s up as high as 379% and that’s after going through the worst stock market crash in history.”

He wrote a special report about the company in which he reveals its name and ticker symbol. The report is called Four Solar Stocks to Financial Freedom. You can get a free copy by signing up for Matt McCall’s Investment Opportunities newsletter, which I’ll cover in a bit.

Luckily, you don’t have to sign up for the newsletter to read the report because those clues indicate that he is talking about Enphase Energy (Nasdaq: ENPH).

Enphase Energy is the leading manufacturer of microinverters worldwide and is headquartered in the US. Its main foreign markets are Europe and Australia and it has sold millions of its devices since it started producing them in 2008. It was the first company to make microinverters on a large scale.

By the end of 2020, its annual revenue was $774.4 million, which sounds like a sensible extrapolation from the $721 million figure that Matt gives in the presentation as of September.

The report has three other solar companies. As for the second pick:

“My second play is already the leading manufacturer of solar tech designed specifically for electronic vehicles.

The EV industry is projected to explode in revenue over the next decade, right along with solar…

A cheaper and longer-lasting energy source for cars means cost of EV production will drop significantly.

And the money will pour in…

Expect this firm to supply millions of its EV chargers across all sectors globally. They will be needed for a massive infrastructure that must be large enough for the 18.7 million EVs said to be on the road in the U.S. alone by 2030.”

Unfortunately, this description was not helpful enough to unveil the name of the company he is referring to here. For example, he doesn’t specify what he means by “solar tech” and that is quite ambiguous.

“This company has seen tremendous growth since the start of 2020, soaring as high as 341% since the market crashed back in March and showing no signs of slowing down…

Its ‘power optimizer’ systems that supercharge individual solar panels and connects them to the electrical grid to power our homes and communities have been installed in 133 countries around the world.

Focusing on acquisitions to help drive its growth and expand its product offering, its revenue more than doubled between 2017 and 2019, increasing from $607 million to $1.42 billion.

The company has been solidly profitable for years, with operating profit also doubling over that time frame.”

The company that suits this description perfectly is Solar Edge (Nasdaq: SEDG). Solar Edge, whose headquarters are in Israel although it is incorporated in Delaware, is a leading provider of solar inverters, power optimizers, and solar array monitoring systems.

It is best known for its DC optimizers, which have vastly improved on safety. They also mitigate the effects of shading and panel faults. They also facilitate seamless integration of an isolated array with the grid.

In 2019, it had annual revenue of $1.42 billion, which perfectly matches Matt’s figure.

I see an opportunity for this to become a TRILLION-DOLLAR company this decade.

Yes, you read that correctly.

A large portion of revenue will come from a huge increase in EV sales, which is projected to soar nearly 20 times in the next 10 years – from 2.5 million vehicles today to 31.1 million – and make up one-third of all auto sales worldwide.

A lot of the growth will be in China, where this company is already spending big money and taking market share.

I fully expect it to continue to dominate the entire industry over the next decade as the world shifts over to electric vehicles.”

This one is Elon Musk’s Tesla (TSLA). Although Tesla is best known for manufacturing electric vehicles, it is also involved in the solar industry since it owns SolarCity.

Matt McCall is an investment guru who works for InvestorPlace. He edits newsletters like Ultimate Crypto and Early Stage Investor.

He was a broker at Charles Schwab seventeen years ago and claims to have become incredibly wealthy during that period before he decided to quit his job in 2002 to start helping the little guy (Main Street investors) achieve financial independence – by writing newsletters.

He then became the chief technical analyst and co-host of a nationally syndicated radio show called Winning on Wall Street. He also founded a company called Penn Financial Group to offer investment advice.

He has written two books about investment. The latest title is The Next Great Bull Market and it has been a success.

Matt has made over 1,500 TV appearances on Fox News, CNBC, and was even a nightly co-host on Fox Business. He has also been featured on Bloomberg Business Week, The Wall Street Journal, and other publications.

What is Matt McCall’s Investment Opportunities? (The Newsletter)

Investment Opportunities is a newsletter that Matt edits and publishes at InvestorPlace. His investment strategy is to find new investment opportunities ahead of the masses.

When you become a member of the newsletter, you receive:

How much do you pay to join Matt McCall’s Investment Opportunities?

An annual subscription costs $49 if you sign up via the presentation.

Does Matt McCall’s Investment Opportunities have a Refund Policy?

The newsletter has a 90-day money-back guarantee.

A few times during the presentation, Matt said that the mass adoption of solar energy will be down to economics rather than for the sake of “going green” or “saving the planet” (although he acknowledges that it will be a happy side effect of this movement). This means that the incentive to shift from coal, oil, and natural gas to renewable sources will be predominantly economic.

But is that true?

To some extent, it is true. In October 2020, the International Energy Agency confirmed that the cost per megawatt to build solar plants was below fossil fuels across the world for the first time. While this doesn’t automatically mean that solar power will be cheaper for the average consumer, it means that it will be cheaper to build large solar farms than fossil fuel plants for the first time. Solar panels have also been getting cheaper and more efficient, so that helps.

That being said, solar has some glaring flaws, and the lack of efficient energy storage mechanisms to mitigate its intermittent nature is the biggest challenge. Batteries, which are considered to be the best mode of storage, have a long way to go before they can become cheap enough to warrant the large-scale investment.

It is easy to see why Matt is telling his audience to start considering investing in solar stocks. The industry is maturing and the future looks promising if you are looking for a long-term investment.

Nevertheless, do not just take advice from Matt without doing your analysis first because what he offers is general advice (it is not designed to cater to your investment goals because Matt is unaware of them).