In typical fashion, he took it as an opportunity to introduce us to a technology that he thinks is likely to earn life-changing returns – at least enough to label it “The Next Stock of the Decade.”

Therefore, in this article, we will be going through the main points he raised during the pitch. With this information, you should be better placed to decide whether his stock prediction is worthwhile.

What is Mars Technology? (The Pitch)

Although the presentation Mars Technology Declared “Largest Economic Opportunity of the 21st Century” centered on a pivotal technology making waves in the energy industry, it was meant to promote the financial newsletter, Strategic Trends Investor. 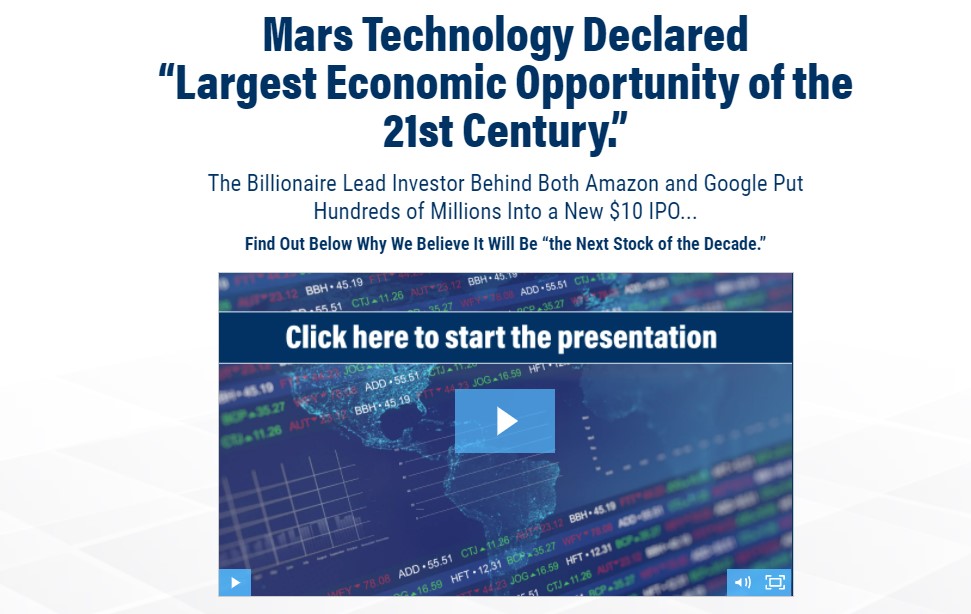 Dave Fessler believes that he has stumbled upon an innovation (“Mars Technology”) that will revolutionize the energy industry. And behind it is a company that he sees riding the trend to massive returns.

How does “Mars Technology” work?

David Fessler says that “Mars Technology” was conceived by a scientist who discovered a new way to generate clean energy when you pass air and gas (fuel) through a ceramic tile. Initially, he had been tasked by NASA to develop a technology that could generate oxygen for survival and gas that would be used as fuel on Mars.

He developed a cell that was essentially a ceramic tile that is made using beach sand with a coating on each side of “a special type of ink.” Fessler insists that “no precious metals, corrosive acids or molten materials are required [to make it].”

The scientist discovered that if you pass electricity through the tile + special ink combo, you can generate air and natural gas.

So, he realized that if he reversed the process and supplied natural gas and air, he could generate electricity.

What Fessler is talking about is some form of fuel cell that takes in natural gas but rather than burn it, reacts it with air to produce electricity.

If you stack these tiles into a cube and repeat the process, you can produce more electricity and apparently, one such stack can power an entire home. 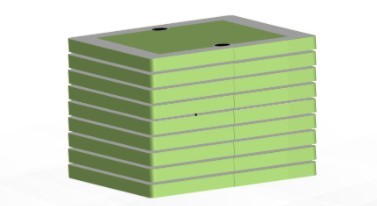 If you stack a few dozen of these cubes, they form powerful stations the size of a refrigerator. Each can generate 1.7 to 2.1 million kilowatt-hours (kWh) of energy within one year.

Fessler says that these fuel cells have been installed by many big companies so far.

Fessler’s The Next Stock of the Decade

What company is Dave hinting at in the presentation? Here are some clues:

“And why is he targeting this stock?

Because this company… which just recently IPO’d and trades for less than $10… is set to become the most important company in America.

The company was founded by a brilliant NASA rocket scientist.

He was working on a secret project to create livable environments on the surface of Mars.

And in doing so, he managed to create a new technology that will forever change the planet Earth.

I suppose that explains why he chose to go with the heading (Mars Technology).

The investor he is referring to in the first sentence there is a billionaire whom Fessler tells us belongs to “the Midas List of the very richest people in America.” He was a lead investor of Amazon and Google as well as Beyond Meat, Slack, and Intuit.

He has invested hundreds of millions of dollars in the stock we are discussing here as well as its breakthrough technology.

Going back to the teaser:

“The $10 stock I’m talking about today has already made partnership deals with 25 of the Fortune 100 companies.”

And speaking of patents:

“As soon as the CEO of this company developed this technology, he started filing for patent protection on every aspect of his power generation system.

And a quarterly announcement:

“In a recent quarterly announcement, the company revealed that margins are up to 48.5%… more than double what they were the year before, at 24.1%.”

The company he is talking about is Bloom Energy (BE)

It was founded in 2001. It is based in San Jose, California.

It makes solid oxide fuel cells that produce electricity on-site using biogas or natural gas as fuel. The cells are based on the work of K. R. Sridhar, who created a technology that could convert the atmospheric gases on Mars into oxygen.

Its fuel cells comprise wafers made from sand stained with a special ink just like Dave describes them in the presentation.

As of 2018, Bloom had installed fuel cells that collectively generate about 300 MW, which adds up considering Fessler says that it has partnerships with 25 major companies (not to mention smaller clients).

It was featured on 60 Minutes in its “coming-out party” in 2010 because until then, it had been working in secret.

Who is David Fessler?

David Fessler is an engineer by trade and a veteran of the semiconductor industry. He works for the Oxford Club.

He used to design automated systems while he was working at Silicon Valley. He helped develop systems that are used by companies like Amazon and Apple to detect anomalies in their software.

However, he made a career change and for the past 12 years, he has been doling out financial advice full time. He has been helping regular investors find the most impactful scientific discoveries and the best investments they can leverage to generate sizeable returns.

Dave leverages his experience in the tech industry to pinpoint those breakthroughs before they become common knowledge; his investment strategy is based on that.

What is Strategic Trends Investor? (The Newsletter)

The presentation was meant to promote the Strategic Trends Investor, a newsletter that is edited by David Fessler and Matthew Carr.

Most of what they do is alert their readers to fast-growing industries in the market that they believe have the potential to generate huge returns.

They identify the “No. 1 stock in each sector” and recommend it to their followers.

In summary, here is what you should expect when you subscribe to Strategic Trends Investor:

How much does it cost to join Strategic Trends Investor?

Do they refund you if you cancel your subscription?

Dave Fessler offers a 365-day 100% money-back guarantee. This means that you can cancel your subscription any time within a year of joining and they will refund you the fee in full.

Dave Fessler’s presentation concerns fuel cell technology whereby he explains how it will change the world and disrupt the energy industry.

He wants you to invest in Bloom Energy (BE) because he thinks it serves a crucial need; they provide businesses and homes with off-the-grid, decentralized energy that more people are warming up to. It also helps that those fuel cells produce environmentally friendly energy.

As an investment, I will leave it up to you to decide whether you will take a punt on it.