Louis Navellier released a presentation titled Project Light Speed in which he launched his newest advisory service based on a strategy he is debuting for the first time.

Louis believes that it can deliver up to seven winning recommendations of 500% over the next 12 months.

It has to do with options and he says that his new strategy could have outperformed his stock gains by more than 5-to-1 on average.

In this article, I walk you through the presentation highlighting the main points and share key details regarding his new research service.

What is Louis Navellier’s Project Light Speed? (The Pitch)

Navellier is not focusing on stocks and instead wants you to trade options, which is uncharacteristic of him. This becomes obvious when he starts talking about using the power of leverage (you can read more about the leveraging power of options) and using a small amount of money to control a large amount of money:

In other words, using leverage you can see gains out of proportion to your initial investment.” 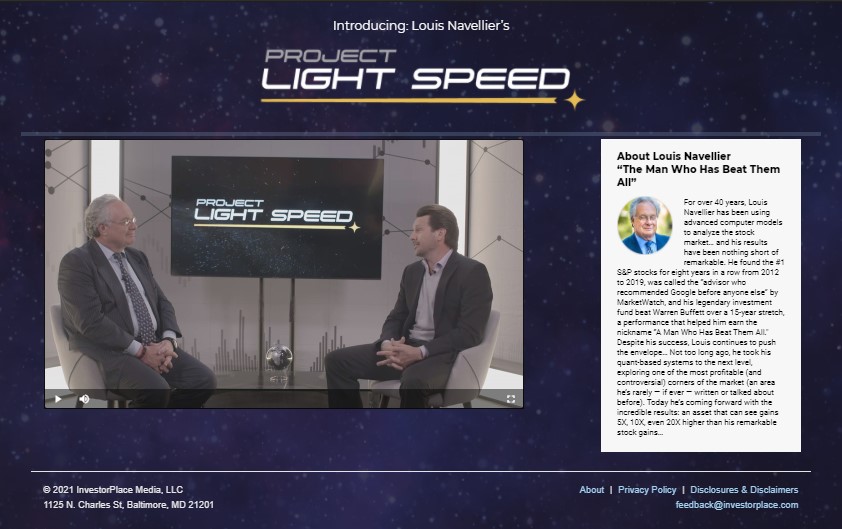 Since he joins a long list of options gurus like Andrew Keene (Super Options) and Alan Knuckman (Big Option Trader), how is he any different?

He says that his trading strategy is different because he gets two important elements right (people who get one or both wrong, according to him, have a hard time trading options. So, what are the two elements?

First element: He says that a successful option play hinges on picking the right stock. As he puts it:

“The stock is the foundation of any options play.

The option is the finishing touch.

Pick the wrong stock and your entire trade will collapse… the option you pick won’t really matter at that point.

And the reverse is also true…”

And he positions himself as the perfect man for the job by highlighting how his quant-based systems have earned big, consistent returns over the years. He claims to have found the number one stocks in the S&P for eight years in a row and beating the market while at it.

Second element: He says that the second part is finding the right type of option (of which there are many). He says that people often make the wrong choice when it comes to trading options by picking the wrong kinds:

“Most people think all options are all the same…but they’re not.

Think of stocks… there are many different types of stocks…blue chip, mid-cap, small-cap, penny stocks…

Well, just like stocks, there are many different types of options.

Most of the differences have to do with time frame…how long you stay in your options position.

And this is the second big thing folks get wrong…

They buy short-term options…and try to make a quick score.

Usually in less than a month.

And because of this they almost always get burned.”

Navellier favors a type of long-term option play called LEAPS, short for Long Term Equity Anticipation Security. These are publicly traded options contracts that function the same as regular contracts but have expiry dates that are longer than a year. They typically last up to three years from the day they are issued.

“After crunching billions of data points, I found a type of longer-term option that’s the perfect vehicle for turbocharging my stock gains…

And it’s the investment that’s at the heart of Project Lightspeed.”

He says that by investing in LEAPS, you get to wait a little bit longer for the fundamentals of a company to kick in, contrary to focusing on the short term when unforeseen things can knock it off course.

Louis Navellier is one of the investment analysts working at InvestorPlace. He edits a few newsletters for the firm, including Power Options, Growth Investor, and Breakthrough Stocks.

He has been in the financial services industry for over four decades and during that time, he has been using advanced computer models to analyze a stock. He even refers to himself as a quant (short for a quantitative analyst).

Navellier claims to have had a good record as an analyst over the years. For example, he claims to have found the number one S&P stocks for eight years in a row (between 2012 and 2019) and beaten Warren Buffet over 15 years. He says that he recommended Google before anyone else.

He has always been about investing in stocks but in this presentation, he forays into the realm of options.

What is Power Options? (The Newsletter)

Power Options is a brand new service Louis Navellier will be offering via InvestorPlace. It is based on his strategy of using LEAPs option plays to leverage the returns made on stocks for even bigger returns.

When you sign up for the newsletter you receive:

How much do you pay to join Power Options?

A full year of Power Options costs $2,995 if you join via the presentation although the retail price is $3,995.

No, there are no refunds.

Louis Navellier is launching a newsletter called Power Options to recommend option plays because he believes that to pick the best option plays, you have to be good at picking good stocks first – and he considers himself great at that. He is not a big fan of short-term plays, so he prefers LEAPS (a type of long-term options contract).

He says that he didn’t start recommending options sooner because there wasn’t enough computing power to analyze the millions of data points involved (because there are many times more option plays in the market than stocks).

I noticed throughout the presentation that Louis kept referring to backtests he had done on the trades he talks about, which makes sense because the service is new. However, it is not the best way to test the strategy because he has the benefit of hindsight and who’s to stop him from only showing favorable outcomes. Therefore, do not make your decision to follow his strategy merely based on the presentation, do more research into it first.