Louis Navellier recently did a presentation about what he considers “The #1 Investment of the Decade.”

It centers on a new technology that big companies are “racing” to get in on that he says has “kick-started a $150 trillion investment opportunity.” He even says that experts are regarding it as “more important than electricity.”

In this article, I reveal what technology he is talking about so you can decide whether it is worth investing in as Navellier proposes.

What is Louis Navellier’s Investment of The Decade? (The Pitch)

Over the past year or two, many investment gurus have come out with their versions of an “investment of the decade” – investments that ought to shape the financial state of investors for the next ten years if they are lucky enough to get in on them early. 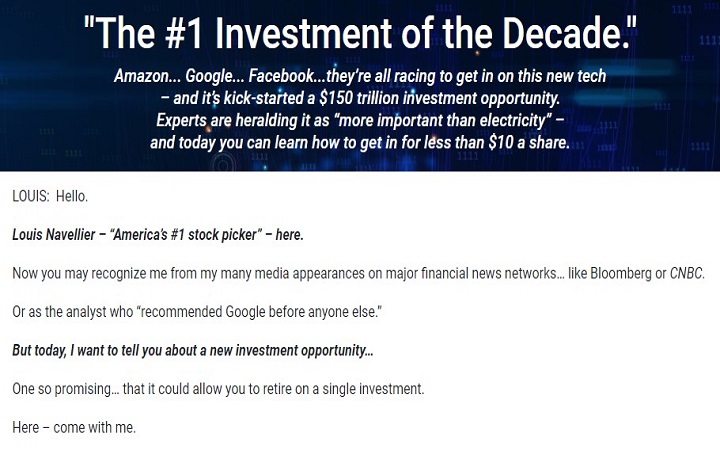 Louis Navellier got in on the act and was teasing what he claimed very early into his presentation is an investment that is so good, you can retire on it.

It has to do with the automotive industry:

“I believe that every single car on this street…

Now, don’t get me wrong – I believe that people will continue to collect these kinds of cars.

But soon, they will be just that – collector’s items.

Not much more useful than a 1908 Ford Model T would be in today’s world.

And it’s all because this incredible new technology…

Will completely transform every aspect of the way we travel.

The MIT Technology Review says that this tech will be the ‘future of transportation.’

And PBS says it will kick-start a ‘transportation revolution.’

He can’t talk highly enough about it and even claims that it could be bigger than the personal computer, the smartphone, and even the internet:

“I don’t want folks to miss out on this new opportunity, even if it feels a little ‘uncomfortable.’

Being a ‘first mover’ usually is.

But I’m telling you, this will be bigger than the personal computer…

Experts say that this tech will help kick-start a ‘fourth industrial revolution.’

Effectively tapping into the biggest tech wealth-generation event in history.

Even bigger than the tech boom in the 1990s…

And the smartphone revolution of 2007…”

And, what technology is he talking about? Well, it’s Artificial Intelligence (AI).

Whenever someone mentions AI, most people find themselves thinking of its applications in movies like “The Terminator” and, for the younger generation, “Avengers: Age of Ultron” but there is more to AI than being behind evil and murderous robots intent on destroying the human race. It is more pervasive than most people realize.

Louis says that AI will enable us to build more innovations that will create new companies that may become as dominant as big tech.

He says that now is the perfect time to invest in AI because we have enough computing power to build strong AI systems. Computer technology has evolved over the past few years and an article by the MIT Technology Review backs him up on this. With robust computers, AI use cases have become even more complex.

How does Navellier want to invest in AI?

Although he acknowledges that big companies like Facebook, Amazon, and Google have huge presences in the AI sector, he doesn’t want you to invest in them because “they’re not where folks are going to see ‘retirement sized’ gains.”

Instead, he wants you to focus on what he calls “hypergrowth sectors.” These sectors, though still nascent, will benefit from the advancement of AI. One example he gives is self-driving vehicles.

He says that the best way to invest is to find a technology that will be critical to every industry working with AI, something of a pick and shovel arrangement. That’s why he recommends NVIDIA (NVDA).

He recommends NVIDIA because it produces the computer chips that run AI and regards these chips as the “backbone of the coming $150 trillion AI market.”

However, it is not his ideal pick because it is already a large company and it will take time to grow by a sizeable margin.

Therefore, he opts for smaller, lesser-known chipmakers – companies that cater to the big corporations while also possessing the ability to grow exponentially.

To find these companies, he says that you can benefit from his analysis, which he conducted using an AI-based trading system.

He says that he has identified a small chipmaker that has been missed by the mainstream media that is trading for under $10 a share (at the time of releasing the pitch). It makes the smart chips used in a car’s power train and driver assistance and safety systems. It also released a new technology suite designed for autonomous vehicle makers.

There are two other companies his trading system has also identified. The first one has lucrative contracts with Apple and Qualcomm. He says that it is planning to produce a new semiconductor chip that will be faster than the chips in the market today. Rumor has it that it has been contracted to provide chips for Apple’s autonomous car.

He has a special report to give away called 3 Stocks Powering the $150 Trillion AI Boom. It has the names of all three stocks and other details about them.

To get a free copy, you have to sign up for his advisory service, Growth Investor.

Louis Navellier is a professional trader and investment analyst who edits newsletters at InvestorPlace, an independent investment research firm.

He conducts most of his research using quantitative analysis that involves creating computer-based models used to predict outcomes in the market. He is also a fan of investing in growth stocks, which he thinks can deliver higher returns than passive index investing.

Navellier insists that he has been investing since he was in college and that along the way, he has picked (or recommended) stocks like Dell, Microsoft, and Amazon before they became the big tech companies they are today.

He operates a money management firm where he manages assets worth almost $2 billion.

What is Growth Investor? (The Newsletter)

Louis Navellier says that the Growth Investor advisory service runs on an AI-based system. He says that it identifies large “breakout stock opportunities” before other investors and analysts do.

When you become a member of Growth Investor, you get:

How much do you pay to join Growth Investor?

There are three annual subscription plans ($49, $79, and $99) with the more expensive ones coming with bonuses.

It has a 6-month money-back guarantee.

Closing Remarks on Louis Navellier’s Investment of The Decade

Louis Navellier believes that all tech companies that have been successful in the past, growing from small firms to big corporations, have had one thing in common: they have been behind transformative technologies. These are technologies that reshape many elements of people’s lives.

In this case, he touts AI as the transformative technology that will catapult a few small and relatively unknown companies to the moon. He expects it to revolutionize industries like self-driving and cybersecurity too.

As I pointed out earlier, AI has been around for many years and has been more pervasive than people think it is. It already has a wide range of uses that impact our lives directly but we don’t spare a thought for it in that regard. Most people perceive AI as something that “will come” because they think of it being an advanced technology that may threaten our very existence. Although Navellier doesn’t approach AI that way, I still think he is right about it “developing” because computing power is increasing.

However, there are no guarantees that the stocks he is recommending will perform as well as he expects them to because the market is unpredictable.