David Fessler from the Oxford Club has been touting a new form of energy that he describes as:

He teases a tiny stock that is behind it and says that a major catalyst affecting it will happen at a future date thus you should start considering investing before that date.

In this article, I walk you through the presentation and reveal the name of the company he says is at the forefront of this new trend.

What is Liquid Electricity? (The Pitch)

In the presentation, David Fessler claims to have found the next big thing in energy and technology; something he calls “Liquid Electricity” that he pegs the future of the energy industry on. 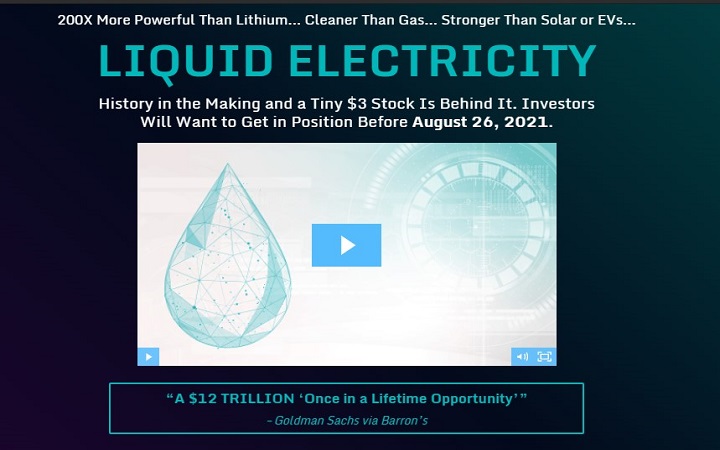 Here is how he introduces it:

“Its NEW technology can harness the most abundant form of power on the planet!

I call it ‘Liquid Electricity.’

And the unique type of energy it produces… has ***200 TIMES*** as much energy as lithium-ion batteries, the kind you’d find in a Tesla!

And if you thought lithium was in high demand, as companies like Apple, Google and even Tesla fight over the supply…

The demand could be MASSIVE.

Especially with a major catalyst on the horizon for the $3 stock behind Liquid Electricity… set to happen on August 26, 2021.”

What he just described there is not a new form of electricity, rather it is the process called electrolysis. It has a variety of uses but in this case, he says that it will be used to produce hydrogen.

More on this energy source:

“A source of power that can be transported anywhere… in trucks or through pipelines… with no need to build NEW infrastructures… but simply modify existing ones.

A type of power that can be stored in storage containers and deployed when needed… so power outages like what we saw in California and Texas never happen again.”

It can power cars, trucks, aircraft, homes, and even entire cities. He says it is already being used in New York City and LA wants to implement it too. Countries like India, Spain, Germany, France, and South Korea are also investing in it.

He believes that its most important use will be as a storage component in the energy grid because a lot of energy is lost. Dave Fessler says we waste $130 billion worth of energy and it will help salvage some of that.

How does Liquid Electricity work?

Fessler says Liquid Electricity is produced when excess energy is “liquefied” through electrolysis.

He even presents us with a diagram: 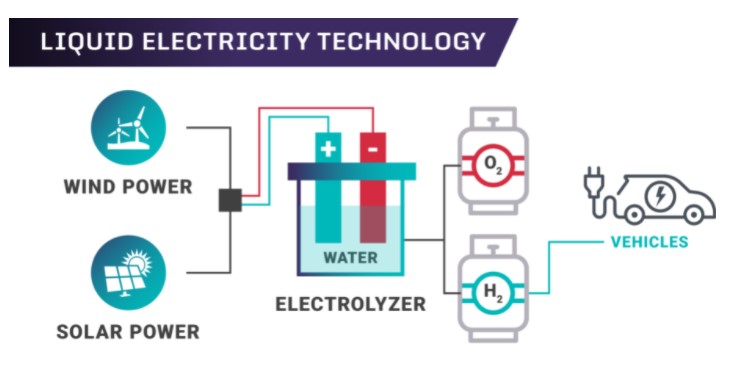 His explanation of the process occurring is as follows:

“The electrolyzer hooks up to those existing power sources… as you see here.

The electrolyzer is filled with water and begins to channel electricity…

The water reacts and forms oxygen…

And one other key element… perhaps the single most important element in the history of science.

That positively charged hydrogen is a SUPER-FUEL, charged and ready to be stored or put into vehicles!”

So, what process is he talking about?

He is describing how hydrogen is produced through the electrolysis of water. Since the energy sources in the schematic are renewable or green, this is technically Green Hydrogen.

Green Hydrogen has often been cited as an alternative fuel generated using renewable energy sources. It has been touted by many conservationists as a clean energy source that could bring the world to net-zero emissions.

The main criticism of renewable energy sources has always been their intermittency. They are seen as unreliable when you need them because they don’t produce energy per usage. Therefore, energy storage has always been thought of as necessary to bridge that gap and the mechanisms we have are underwhelming.

Therefore, Green Hydrogen is seen as a way to store the energy produced by renewables.

This hydrogen can then be burnt to produce energy or used in hydrogen fuel cells to achieve the same outcome.

Recall Jimmy Mengel based his presentation on Blue Gas “Tesla Killer” on this premise because he was talking about using hydrogen fuel cells.

Dave Fessler has identified a company that he thinks will lead the charge in bringing Green Hydrogen to the masses.

Its whole essence is that it builds “electrolyzers” (that carry out the electrolysis we mentioned earlier). In his own words:

“As we speak, the company is already operating the world’s LARGEST electrolyzer plant, a cutting-edge facility that can produce electrolyzers that can create 500 megawatts of Liquid Electricity each year.

And companies are lining up to buy this company’s electrolyzers.

Nikola, an electric trucking company, has become one of its biggest customers already.

It signed a contract for 448 electrolyzers produced at the factory.

The Department of Energy issued a grant worth $4.4 MILLION.

This company has also partnered with Tenaris, a truck manufacturer in California. Tenaris designs trucks to run on the energy that comes from Liquid Electricity.”

He says that you will not find the company listed on a “blue chip exchange” and at $3 (as he was releasing the presentation), it is still under the radar. It has an unusual five-character ticker symbol and already has the backing of UBS Switzerland, Credit Suisse, JPMorgan Chase, and Bank of New York.

Its revenue and income are up 30% from its previous quarter earnings and it has been breaking earnings records.

Its order backlog has gone up 90% year over year and now there are more than 3,500 of its electrolyzers installed around the world.

And, of course, there is the big catalyst that David says will trigger its exponential growth. It has to do with an autonomous plant:

Because in the second quarter of this year…

This company hopes to flip the switch on the VERY FIRST test phase of the world’s ONLY autonomous plant… a fully operational, 100%-automated facility making these electrolyzers…

Literally the first of its kind in the world!!!

David Fessler wrote a report titled Liquid Electricity and the Must-Own $3 Stock in which he names the stock and its ticker symbol. You can get your hands on the report for free if you sign up for his newsletter, Extreme Disruptions Trader.

Luckily you don’t have to pay that $1,495 just to find out the name of the company because after doing my research, I found out that he is referring to a company called Nel ASA (NLLSY: OTCMKTS).

Nel ASA is a Norwegian company that provides solutions for the production, storage, and distribution of green hydrogen. It is listed on the Oslo Stock Exchange and you can trade it in the OTC markets, hence the “unusual five-letter ticker” Fessler is talking about.

In June 2018 Nel ASA was awarded a contract by Nikola to deliver 448 electrolyzers as the electric truck maker seeks to revamp its hydrogen station infrastructure.

In August of 2018, Nel announced that it was constructing the world’s largest electrolyzer plant that will be fully automated as it seeks to make efficient electrolyzers at a game-changing cost. This must be the plant that Fessler is talking about.

Who is David Fessler?

David Fessler is the energy and technology expert for The Oxford Club, an independent financial research firm. He is the Managing Editor of Advanced Energy Strategist, the firm’s premium energy research service, and the co-editor of an e-letter called Energy & Resource Digest (free) that focuses on the energy and infrastructure markets.

In addition to that, he is a monthly contributor to InvestmentU, another free investment newsletter by the Oxford Club.

He has had a career spanning 46 years with an extensive background in technology. While he was the vice president of a technology company called LTX, he helped design its earliest automated systems that are used in Silicon Valley, particularly testing equipment for semiconductors.

He also worked as the vice president of Operations, sales, and marketing for a company called Quality Telecommunications Inc.

He wrote a book called The Energy Disruption Triangle that became a no. 1 bestseller on Amazon.

What is Extreme Disruptions Trader? (The Newsletter)

Extreme Disruptions Trader is a new investment advisory service that Dave Fessler is promoting through the presentation. It is published by The Oxford Club.

David Fessler says that when you sign up for Extreme Disruptions Trader, you get a copy of the report about the liquid electricity stock, titled Liquid Electricity, and the Must-Own $3 Stock for free. And in addition to that, he will be sending you investment recommendations regularly.

These recommendations will involve breakthrough technologies and tiny innovative stocks that will enable you to grow your investments exponentially.

In a nutshell, here is what you get when you join the Energy Disruptions Trader:

How much do you pay to join Extreme Disruptions Trader?

An annual subscription to the Extreme Disruptions Trader newsletter if you join via the link at the end of the presentation is $1,495. The retail price on the official website is $5,000.

No, the subscription fee is non-refundable.

If you cancel your subscription within the first 90 days of joining, they allow you to use your $1,495 on any other publications offered by the Oxford Club.

In his presentation, Dave Fessler is talking up Green Hydrogen as an alternative fuel to power our homes, transport systems, and cities. He is not alone in this as it has been touted as a clean energy source that even President Biden is promising will be part of his clean energy plan.

However, to bring it to the mainstream, it has to overcome several challenges. The most glaring ones are cost and efficiency of production, something that current technologies are struggling with. On top of that, renewable sources of energy like solar and wind also have to be ramped up (which also requires investment and goodwill).

I noticed that Dave Fessler is not telling his audience to wait for the utopian paradise where green hydrogen is a major source of energy. Instead, he wants you to invest in a company (called Nel ASA) that will benefit from the small strides that are currently being made towards that and, in investment terms, it is worth looking into.