The Lightning Trend Trader is one of the investment research services offered by Marc Lichtenfeld and published by The Oxford Club.

Having encountered a couple of services offered by the firm, I was eager to see what it would be all about. Therefore, when I was sent an email inviting me to a presentation promoting it, I watched it.

In this review, with the help of the presentation, I will give you an overview of the investment strategy Marc employs as well as what joining the newsletter entitles you to.

He also teases a small biotech company that I will reveal to you here for free.

What is Lightning Trend Trader?

Lightning Trend Trader is an advisory service by Marc Lichtenfeld. His research focuses on companies that are likely to benefit from catalytic events like positive coverage, favorable products, and the likes. 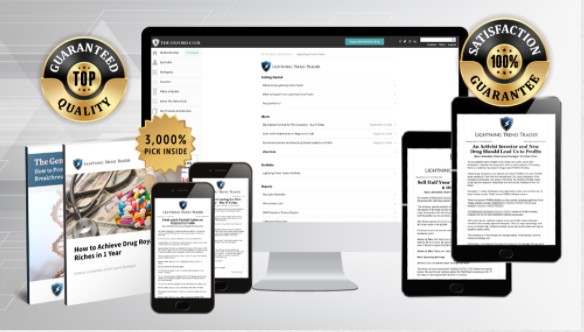 Marc describes his strategy as follows in the pitch:

“The strategy I use is a powerful, proven way to make a LOT of money in a short period of time.

It harnesses the power of special catalysts…

That send normal stocks to the moon.

I call them “Lightning Strikes.”

But then, when a Lightning Strike occurs, you have the opportunity to make a LOT of money in a very short period of time.”

To elaborate what he refers to as “lightning strikes,” he gives examples of a series of biotech companies that brought a great product to the market or received FDA approval. He says that those positive news were catalysts that made them suddenly rise in value.

He then trades options on those companies.

In the presentation, he teases a small drug royalty company that he thinks can earn you 3,000% in one year.

What company is he teasing? 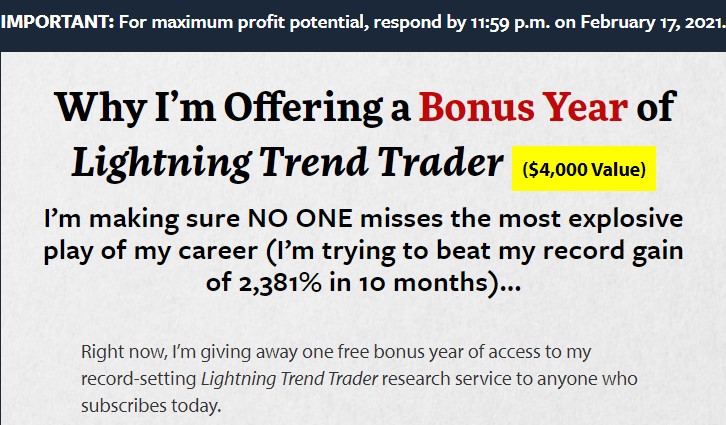 Let’s go straight to the exact words he used to describe it in the presentation:

“The 3,000% winner is unlike any other company you’ve ever heard of…

And it’s the best kept secret in the market.

You’re probably familiar with the concept of royalties.

And what most people know about royalties is that they’re a payment you receive over and over again, usually on a song or a book.”

“This company collects royalties on pharmaceutical drugs – which may just be the most lucrative business in the world today.

And the companies that own the rights to these royalties can make a fortune.

They’re able to collect this cash simply by investing in a drug before it goes to market. Then the cash rolls in for years and years.

And they don’t have to spend millions on research and development, FDA testing or marketing.”

He seems to be impressed by its business model: it doesn’t have marginal costs yet continues to earn money from royalties.

“It has one of the biggest portfolios of drug royalty streams out there, which means every time one of these drugs has a big sales quarter… another Lightning Strike will send this royalty company higher and higher.”

“It has income streams established on not one or two, but 24 FDA-approved drugs…

These include drugs that treat major diseases like cancer… osteoporosis… bipolar disorder… epilepsy… and more.”

Its even owns a proprietary molecule that it licenses out to other drugmakers:

“This company’s main offering is a proprietary molecule it acquired from scientists at the University of Kansas… and now licenses out to other businesses.

This molecule is really special. It makes drugs better, more stable and better absorbed by your body.

Marc then talks about its partnership with Amgen:

“Amgen has a drug called Kyprolis.

It goes after a specific enzyme to make tumor cells self-destruct.

But to make the drug even better, Amgen added this royalty company’s proprietary molecule to the mix.

In clinical trials, this combination kept patients from getting worse – and helped them live 20% longer.

For a disease with a 50% survival rate (in other words, a coin toss), this drug was a godsend.

He says that it is has an agreement with a company called Retrophin that is developing a drug called Sparsentan. It will collect loyalties on Sparsentan once it goes into circulation.

It is also going to collect royalties on a drug that Pfizer is developing that prevents osteoporosis, another drug called remdesivir that fights COVID-19, and another type of drug called “human therapeutic antibodies.”

And to the big reveal…

The company that matches those descriptions is Ligand Pharmaceuticals (NASDAQ: LGND).

Ligand Pharmaceuticals is a biopharmaceutical company based in San Diego. It was founded in 1987, went public in 1992, and initially was developing drugs. It then changed its business model in the early 2000s and started acquiring existing drugs and forming partnerships to develop them further.

It develops or buys up royalty-generating assets, including drugs, therapies, and technologies. As of 2015, it was in partnerships with 120 pharmaceutical companies.

Why am I confident that Marc was referring to it? There are two smoking guns.

First, Ligand licensed Kyprolis and receives tiered royalties off of the drug’s sales from Amgen, which bought Onyx Pharmaceuticals (Onyx developed and owned the drug).

Second, its Captisol technology is being used in the manufacture of Gilead Science’s FDA-approved antiviral drug used for the treatment of COVID-19 called Veklury (remdesivir) and Marc mentions this in the presentation.

Who is Marc Lichtenfeld?

Marc Lichtenfeld is an author and investment guru. He is the chief income strategist at the Oxford Club which is similar to Brownstone Research. In addition to The Lightning Trend Trader, he edits The Oxford Income Letter, Stock Sequence Trader, and Closing Bell Profits.

He has written a book on investing in income-generating opportunities called Get Rich With Dividends: A Proven System for Double-Digit Returns. It embodies his general investment philosophy of trusting reliable income-based investments.

Before he joined the Oxford Club, Marc was a senior writer for TheStreet, a publication owned by CNBC’s Jim Cramer.

His work has been featured on US News, The Wall Street Journal, Yahoo Finance, The World Report, and Barron’s. He has also appeared on CNBC and Fox Business.

What you get when you join Lightning Trend Trader

Here is what you get as a member of Lightning Trend Trader:

How much do you pay to join Lightning Trend Trader?

You pay $1,497 for a two-year membership to Lightning Trend Trader.

There are no cash refunds.

Lightning Trend Trader is an elite investment research service edited by Marc Lichtenfeld and published by the Oxford Club.

Marc’s philosophy is to focus on companies that are likely to grow fast in a short period whenever they are subject to positive news coverage or developing a great product. It seems to be predominantly focused on biotech and pharmaceutical companies.

In the presentation, as he pitches the newsletter, he gives us a taste of the type of company he targets. It is a small drug royalty company called Ligand Pharmaceuticals that earns royalties and has partnerships with major pharmaceutical companies.

Marc doesn’t buy the stocks directly, opting to trade the options on them instead.

Although it is a decent service on paper if you are into options trading, it sounds like almost any other service – and some are cheaper. You can join it if you are convinced that it is worth it and, of course, you should do more due diligence before you fork out your hard-earned cash.