The Legacy Investment Summit is a three-day event hosted by Legacy Research Group where a couple of experts will come together and talk about the financial markets.

Their readers will have the chance to interact with these gurus and with each other as they discuss investment opportunities and the state of the economy.

Let’s dive into what the event will be about in case you want to attend it.

What is Legacy Investment Summit?

The Legacy Investment Summit is a three-day event organized by Legacy Research Group and it brings together the top editors who work for the firm and 400 of their followers who will attend in person. There will be a live-streaming option for those who wish to take part but will not attend in person. 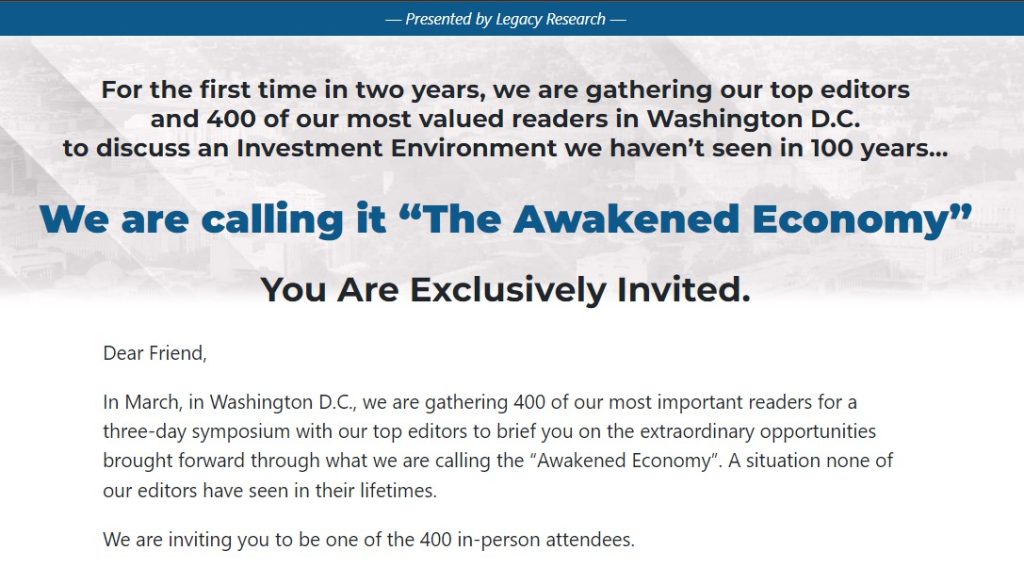 Legacy Research Group is one of the largest independent financial publishing companies in the world with over two million readers in over 140 countries.

It comprises the following publishing companies:

Most people are familiar with Legacy Research’s constituent publishing entities. We’ve covered a ton of presentations by them like Jeff Brown’s S.C.G. presentation, The American Crypto Summit by Teeka Tiwari, and Jeff Clark’s Double Your Money Pitch, just to name a few.

Circling back to the Legacy Investment Summit, the venue will be Mandarin Oriental in Washington D.C. and the event will start on Wednesday, March 30th.

They will provide complimentary breakfast, lunch, snacks, and coffee during breaks. On top of that, there will be cocktail receptions after the general sessions each night from 6 pm to 7 pm.

There will be a series of speakers working for the above-listed companies discussing various investment opportunities as well as the dangers to avoid.

When you secure your seat at the summit, you will receive a designed t-shirt, a padfolio, pen, and something else special (that they will surprise you with) to show you were at the 2022 event.

You also get the Legacy Research $1,000 Voucher. 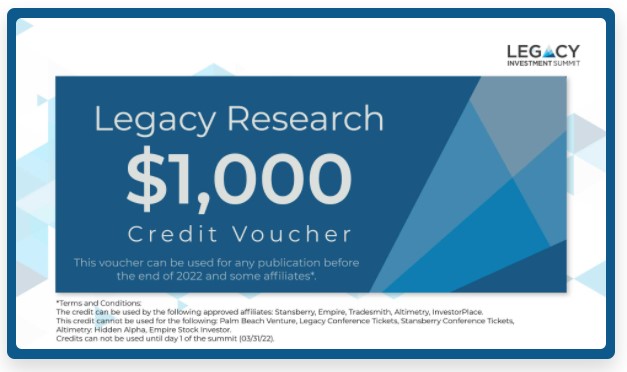 There are two packages to choose from:

If you cancel your ticket, note that there are NO REFUNDS. If you cancel, they will provide you with access to the live-stream of the event as well as all the recordings.

The key topic of discussion at the summit will be what they are calling “the Awakened Economy.” It is a situation that the editors claim to have never seen in their lifetimes.

The “awakened economy” refers to the key trends that have been created by the pandemic.

The editors have been following disruptions in Artificial Intelligence, Fintech, crypto-currencies, 5G, bio-tech, and technologies supporting the metaverse like augmented reality and VR.

They have realized that normally, these trends take 10 years to play out but with the massive distortions happening in the economy, they could take mere months to do so.

The editors believe that the people who understand this and take action will have the opportunity to make a lot of money and it will be unlike anything we have ever seen before.

This could be even bigger than the Dot Com boom, the golden age of Wall Street in the 80s, or the commodities boom of the ’70s.

They say that what we are about to see happen to the economy was last seen more than 100 years ago in 1918 in the wake of the Spanish Flu. 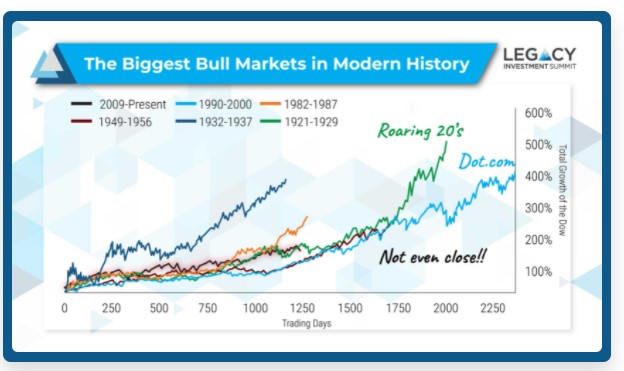 They say that back then when the panic subsided, what followed was one of the greatest periods of wealth creation in American history, often referred to as “The Roaring 20s.”

Investors who made the right decisions made a lot of money thanks to the automobile, petroleum, chemical, radio, and film industries. The editors see something similar happening with AI, fintech, 5G, biotech, and AR and VR.

The 2019 Legacy Summit was the last time this event was held and we can learn a few things about what to expect in the upcoming one from it.

In the 2019 edition of the Legacy Investment Summit, the editors predicted how the markets were going to perform, and here are some of their predictions:

Teeka Tiwari talked about cryptocurrencies and recommended Tesla while it was trading at $48.25. It has since gone on a tear: 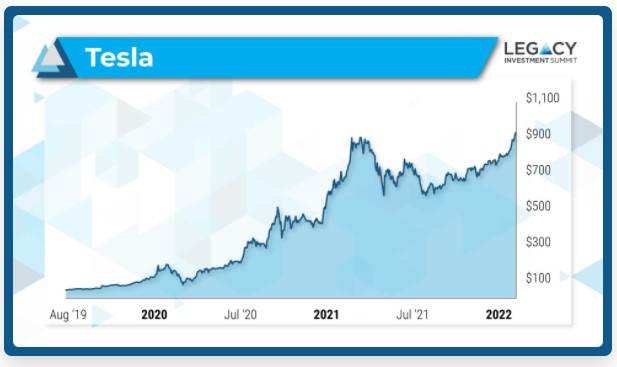 Jeff Brown recommended NVIDIA back when it was trading at $43.71. 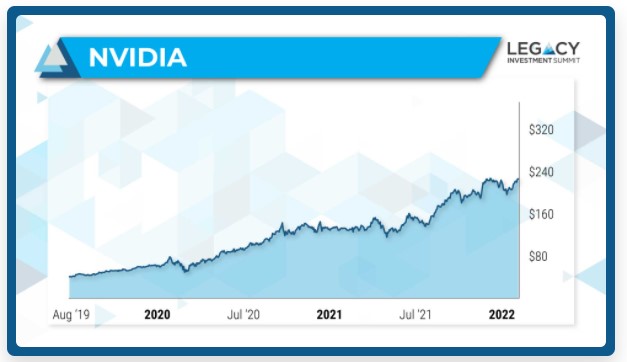 Jason Bodner recommended a biotech company called Repligen Corporation and it was at $81.09 at the time. Here is how that has changed since: 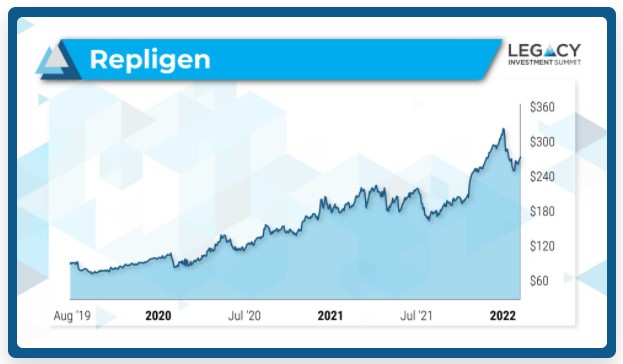 While these predictions ended up working out, I should clarify that these guys also made predictions that did not work out. Therefore, this is not an attempt to portray them as perfect because they are not.

Who are the Experts Behind the Legacy Investment Summit

Peter Diamandis will be the keynote speaker for Legacy Investment Summit 2022. 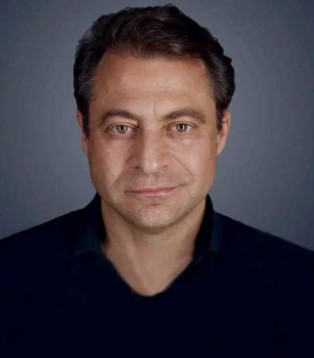 Diamandis has founded over 20 companies that deal with longevity, space, venture capital, and education. He is the founder and executive chairman of the XPRIZE Foundation. He is also the executive founder of Singularity University, a company that counsels the world’s leaders on exponentially growing technologies.

He co-founded BOLD Capital Partners, a venture fund with $250M, and is co-founder and Vice-Chairman of Celularity, Inc., a cellular therapeutics company.

Diamandis was named by Fortune as one of the “World’s 50 Greatest Leaders.” He is also a New York Times Bestselling author of three books, namely Abundance – The Future Is Better Than You Think, BOLD – How to go Big, Create Wealth & Impact the World, and The Future is Faster Than You Think.

Teeka Tiwari is the chief editor at Palm Beach Research Group. He grew up in the foster care system in the United Kingdom and came to the United States at age 16 with just $150 in his pocket and the clothes on his back.

By 18, he had gotten a job at Lehman Brothers. Two years later, he became the youngest vice president in the history of Shearson Lehman. He worked on Wall Street for 15 years before starting his private hedge fund.

Since February 2016, Teeka has been focusing on cryptocurrency investments. He considers himself an expert.

Jeff Brown runs Brownstone Research. He has a wide range of technology industry experience. From semiconductors to mobility, to broadcasting and video technology, to technology infrastructure, to IT networking, to IT security, to automotive and even consumer electronics.

Jeff joined Legacy Research in 2015 and he now edits investment advisories that focus on identifying and profiting from, world-changing trends on the verge of mass adoption

He started his career in 2001 at Cantor Fitzgerald. His office was on the 104th floor of One World Trade Center and luckily, he moved to Cantor’s London office just weeks before the heinous terrorist attacks.

He spent 12 years at Cantor as a partner and head of equity derivatives North America before moving to Jefferies where he traded and sold derivatives and ETFs.

Nomi Prins has had a lucrative career in the world of finance. She worked as a managing director at Goldman Sachs, ran the international analytics group as a senior managing director at Bear Stearns in London, was a strategist at Lehman Brothers, and an analyst at the Chase Manhattan Bank.

She was disgusted by the unethical practices that were pretty common in the banking industry and decided to create public awareness about how the financial systems are manipulated.

She now writes for Rogue Economics and in her daily e-letter, Inside Wall Street with Nomi Prins, she often exposes the collusion between Wall Street and Big Government. Her newsletter, Distortion Report, is all about helping subscribers profit from the distortions this creates in the markets.

He began his career on Wall Street and became a vice president at a prestigious investment firm at just 23. In the early days of the internet, he purchased and sold multiple domain names for up to 8,650% returns. His ability to spot massive trends has put him ahead of the mainstream investing curve for decades.

Dave Forest is a geologist. He has worked in mining and petroleum for over 20 years.

He bridged his technical expertise into the finance and investment sector when he joined Casey Research in 2004. He edited the Casey Energy Speculator newsletter focusing on finding high-potential investment opportunities in oil, natural gas, uranium, and renewables.

He now heads up the Strategic Trader and Strategic Investor newsletters.

He has started his own mineral exploration and development companies and raised over $80 million in equity financing. He also served as Managing Director of Notela Resource Advisors.

He has developed a 10-million-ounce gold deposit in Colombia and was the first to be granted a modern exploration license in Myanmar.

Jeff Clark is the editor of Jeff Clark Research, an investment research firm that focuses on profiting from options.

Before he started his company, he worked for Stansberry Research for over 15 years. He was the editor of The Short Report and Pro Trader.

Keith Kaplan is the CEO of TradeSmith LLC., where he brings us presentations like “the Retirement Calculator.”

He has been an active trader for the last 25 years. He is also a software architect and has been urging investors to leverage the power of software.

TradeSmith was created in 2005 and its first major product was and still is TradeStops, a simple program to track fixed-percentage trailing stops. Over time, TradeSmith has expanded its mission to provide individual investors with sophisticated, yet easy-to-use tools to help them make better decisions.

The Legacy Investment Summit will enable the investment gurus who work for Legacy Research Group to meet face-to-face with their followers. It is a three-day event whose focus will be on an “awakened economy.”

They will be discussing new trends like 5G, AI, fintech, and even AR and VR technologies. The key benefit of attending this summit is interacting with these gurus whom we’ve seen release multiple presentations over the years.