Casey Research has been publicizing a presentation by Nick Giambruno titled The #1 “Lateral IPO” of 2021.

It concerns a “backdoor” way to get in on private investments with the focus on one tiny business that is slated to list on NASDAQ.

In this article, I will walk you through the presentation so you can form your conclusions about it.

Nick Giambruno released a presentation about “lateral IPOs.” He refers to them as a way of getting in on a company before its official IPO.

He says that this enables you to buy in while a company is still unknown and, therefore, cheap. He also says that investing this way has a higher potential gain than waiting for the IPO and investing after it has taken place. 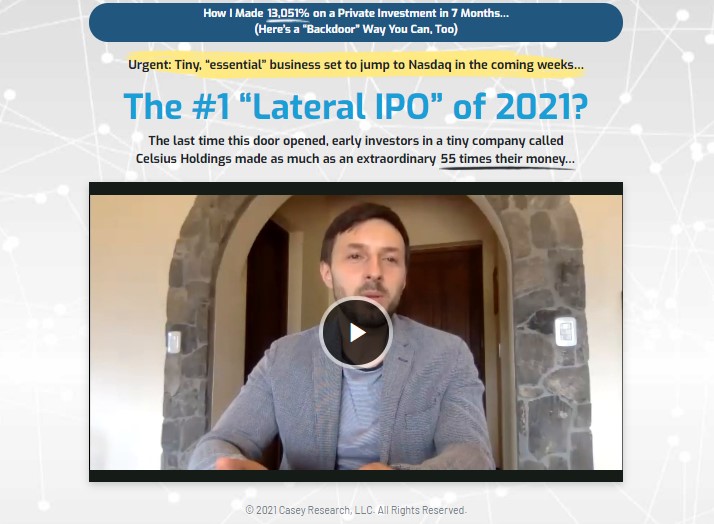 SPACs (or blank check companies) have been quite hot in the newsletter circles in recent times with new advisory services being launched by Jeff Brown and Enrique Abeyta. I even did a review recently of a presentation that was based on marijuana SPACs.

His focus is on marijuana companies and he has picked one “lateral IPO” that he thinks will do well in 2021.

He has picked a company that is based in Israel and he introduces it as one that has attracted some big-name private investors.

“In fact, the company saw more than $17 million pour into its business.

Granted, this was mainly from big name private investors…

He says that a former Prime Minister of Israel is involved.

There are three important catalysts that he thinks will propel your stake in the company should you follow his recommendation:

The first catalyst is a law that was passed in May allowing exporters to move cannabis from Israel:

The law gave Israel the final go-ahead to export cannabis.

This is a moment the country—and the medical community—has awaited for decades.”

Nick expects this to benefit his appointed cannabis company because he expects it to ship medical marijuana to many countries. He says that if it gets just a fraction of the projected “$136 billion by 2028 European market,” its revenue will surge and the stock price will soar.

Then there is the stipulation that they must meet local demand before exporting, which is good news for the company because as Nick puts it, “Israel is one of the most cannabis-hungry nations on the planet.” More from the teaser:

“There’s huge money to be made even before they begin shipping medical grade cannabis to Europe and overseas.

BEFORE they can send medical cannabis anywhere else…”

The company he is teasing has huge potential in this scenario:

“So, our tiny “lateral IPO” moonshot must solve the internal supply ‘problem…’

And by “problem,” I really mean opportunity…

And our moonshot is, as I’ve been showing you, by far the favorite in that pack…

They have the best product, the best distribution deals, and the best leadership (in the former prime minister) …

The second catalyst is the pandemic.

He says that marijuana has been made an essential good by many states and some even recently voted to legalize it, which is a good sign for such businesses.

The third catalyst is the fact that this company plans to list on the NASDAQ. He says that it has filed its papers in preparation for this.

He wrote a report called The Lateral IPO: A Secret “Backdoor” into the #1 IPO of 2021. It has the name of the company but you won’t have to read it because I am about to reveal its name here.

The company he is talking about is Univo Pharmaceuticals LTD (TLV: UNVO). It is a vertically integrated medical cannabis company because it covers marijuana cultivation, processing, and distribution.

This wasn’t too tough to decipher as former Israeli Prime Minister Ehud Olmert partnered with Univo to help promote its brand and act as an advisor.

On the 21st of February 2021, Univo announced that it was considering dual listing on a foreign exchange (NASDAQ or the NYSE) through a SPAC to expand its investor base and support its international operations. This is what Nick may be anticipating and referring to as a “lateral IPO.”

Also worth noting is the fact that Univo has signed an MOU with Canopy Growth to share infrastructure and there hasn’t been any mention of an acquisition.

Nick Giambruno is the chief analyst of two advisory services at Casey Research, namely The Casey Report and Crisis Investing.

Nick writes about value investing in crisis markets, international banking, geopolitics, the global cannabis industry, and surviving a financial crisis. He also speaks at international conferences around the world.

He believes that the best time to invest is “when there is blood on the streets,” an assertion backed by his work.

We have encountered his work before on this blog when he did a presentation about The Switch.

What is Crisis Investing? (The Newsletter)

Crisis Investing is a premium newsletter offered by Casey Research. Nick claims that the name was drawn from a successful book by Doug Casey (founder of the firm and his mentor) going by the same name.

The philosophy behind the newsletter, as you’d imagine, is to buy up stocks while the market is in upheaval, or as he puts it: “The time to buy is when there’s blood in the streets…”

And he believes that cannabis is just emerging from an 80-year crisis because, for much of that time, it was illegal. To that end, he wants to send you his Lateral IPO Report if you become a member of his newsletter.

As a member, you will be entitled to new investment opportunities every month. You’ll also receive login details to his private website where you can access all his previous premium reports and the open model portfolio.

Besides the first report, he will send you another report called The Secret of CBN: 186 Times More Valuable Than Gold. It concerns other rare cannabinoids, besides THC and CBD, which may be more valuable than the two from a medical perspective. He has highlighted one biopharma company in the report that deals with one cannabinoid called cannabinol (CBN).

Then there’s another final report called The Next Cannabis: Why Billionaires Are Piling into “Forbidden” Compounds that has the names of three tiny stocks that are cornering the market of the next generation of biochemical compounds.

How much do you pay to join Crisis Investing?

They don’t offer refunds. Instead, they let you cancel your subscription within the first 90 days for $1,795 worth of credit to use on any other advisory service offered by Casey Research.

Nick Giambruno, by doing his presentation about lateral IPOs, joins many other gurus who have spoken about investing in SPACs – if he was talking about a SPAC here.

Univo Pharmaceuticals recently announced that it was considering listing in a foreign market via a SPAC but it hasn’t finalized that deal. It is a developing story and as of writing this, there haven’t been any major formal announcements. Perhaps that’s what Giambruno picked up on when he decided to do his presentation, referring to this possible arrangement as a lateral IPO. This may change any time now and it would be best if you would follow up on the story when you encounter this piece as the situation may have changed by the time you read it.