I recently came across Tom Gentile’s presentation of what he perceives as the “Largest Economic Shift in Society.”

The presentation was about investing in a new currency that will create a “once-in-a-lifetime” opportunity for investors.

I sat through the presentation to get a gist of what Tom was talking about. To save you the trouble of watching the whole thing, I decided to write this article to give you a quick rundown of the main talking points.

What is the “Largest Economic Shift in Society”? (The Pitch)

Tom Gentile anticipates the Largest Economic Shift in Society to take place in the microcurrency market towards the end of November. 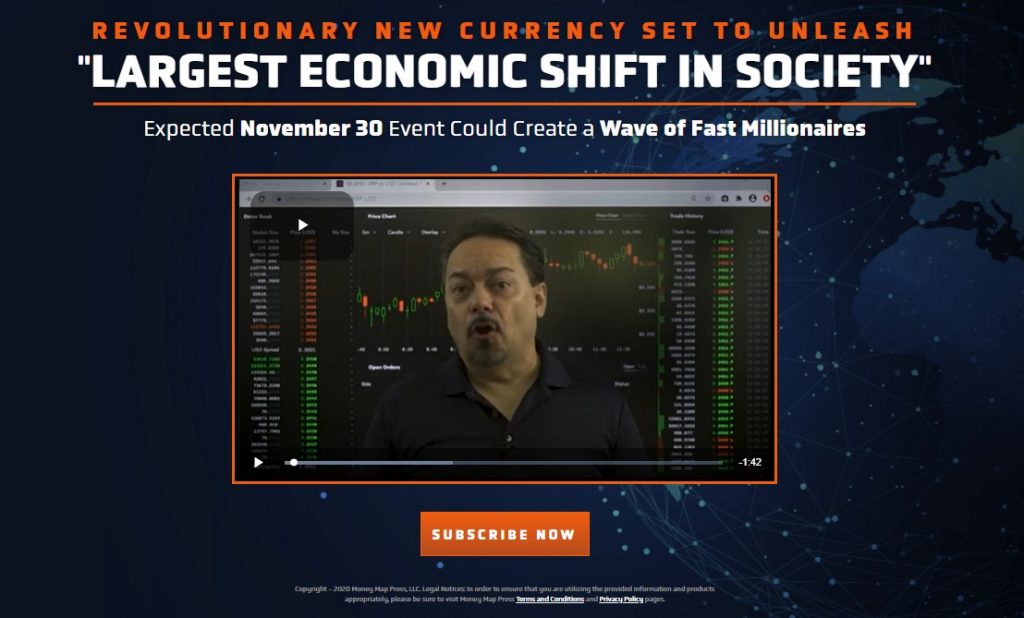 To clarify, what he refers to as “microcurrencies” are cryptocurrencies (altcoins in this case) because he says that these currencies have a “limited supply” that is “fixed in stone.” Cryptocurrencies (some, not all) are known to embed it in their code that there will only be a fixed number of coins to be mined.

Tom describes them as digital currencies that are being created to streamline business activities:

“Microcurrencies are making a seismic shift in the way businesses move money.

That’s what puts them front and center for the biggest paradigm shift in modern history.

With these microcurrencies, businesses are able to transfer money faster – at a cheaper cost.

Which is why industries all over the planet are using them in droves to make their businesses more efficient.”

Since they are based on “smart contracts,” they enable businesses to transact with each other seamlessly thus eliminating the middlemen. And they have been gaining popularity considering that they are in use in many industries:

Going back to the November event, Tom states that there will be an injection of billions of dollars into the microcurency market in a relatively short period.

It has two parts:

The first part is that the market will now be open to institutional investors thus allowing them to purchase and sell those currencies.

Tom says that the microcurrency market initially locked out big money, making the new development all the more significant:

“That’s because for the first time, big corporations, hedge funds, banks, insurance companies, mutual funds… they ALL have access to this tiny currency market at scale.

That’s because microcurrency markets were more attuned to the needs of small businesses and small investors.

But now the doors are swinging wide open so institutions can pour billions into this market.”

Secondly, there will be a “halvening”-style event but it won’t work like the one we saw with Bitcoin in May.

This one will involve a popular unnamed microcurrency and it won’t result in the halving of the currency supply. Here is how this one will work:

“I’m not the only guy talking about the real event… the event that is expected to occur at the end of November.

You see, that’s when the world’s most popular microcurrency cuts its supply in a very meaningful way.

All Because a Whopping 30% of the Supply Is Expected to Be Locked Up by November 30.

Because they will be locked up in something called smart contracts.

They’re going into these smart contracts so insiders can run the microcurrency network. Oh, but don’t worry about them. They’ll get paid interest to keep these microcurrencies running smoothly.

With those two events coinciding, there will be significant movements in the markets and Tom says that he is prepared to pounce.

How Tom picks his microcurrency recommendations

Since the microcurrency market is saturated, finding the digital currencies with the potential to go up is not easy. But Tom and his team have a way of finding them.

He says that they spent 27 months creating the proprietary system that would identify the best candidates for huge gains. They even tested it on over 250 microcurrencies before they deployed it.

He demonstrates how it works with an example of a microcurrency called ENJ. 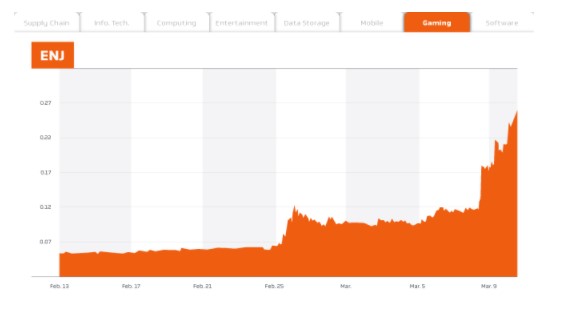 It is not easy making sense of that chart, and that’s why Tom smooths out the movement to make the patterns more visible. The first pattern is the long-term price trend observed over one month. He refers to it as the Long-Term Currency Wave.

Drawn next to the chart, it looks like this: 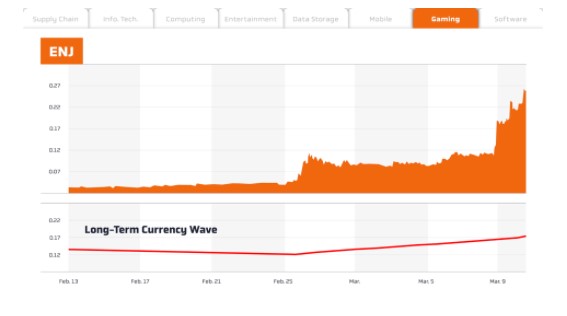 The next bit is the short-term price trend and it can span minutes or days. He calls it the Short-Term Currency Wave: 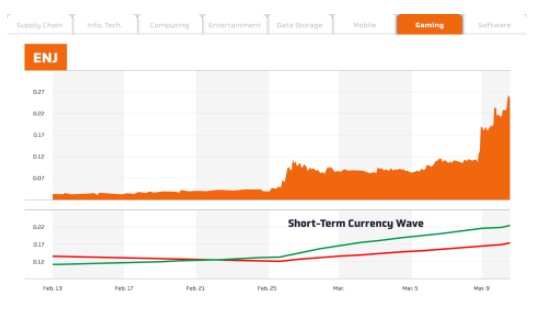 They track both patterns in real-time using their proprietary tool waiting for when the two currency waves cross paths. 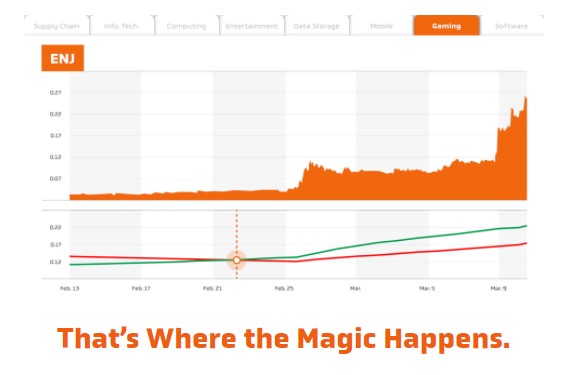 When they cross paths, they say that that’s when they know that the microcurrency is about to go up.

It is important to note that, as Tom puts it, the upward movement can take days, weeks, months, or longer to materialize. Therefore, you shouldn’t get into those trades expecting to earn overnight returns.

What are the risks involved?

Trading microcurrencies is not without its risks, and Tom does a good job clarifying that:

No one has a crystal ball to predict the future – not even me.

That’s why I always tell folks that you should never risk more than you can afford to lose.”

Who is Tom Gentile?

Tom gentile is an investment guru who works for Money Map Press. He refers to himself as “America’s #1 Pattern Trader.”

Tom began his career as a trader thirty years ago. Back then, he was working at Home Depot.

He decided to study options trading and learned everything he could about it from his parent’s basement. A couple of years later, he helped build a financial tech company called Optionetics that taught people how to trade options.

He and his colleagues later sold the company to a large discount broker for a decent sum of money.

At the same time, he edited newsletters for Money Map Press. His publications include Money Calendar Pro, Fast Fortune Club, Alpha 9 Trader, Microcurrency Trader, and Weekly Cash Clock, among others.

He mainly trades options, cryptos, and stocks and applies a blend of technical and fundamental analysis.

What is Microcurrency Trader? (The Newsletter)

The Largest Economic Shift in Society was meant to be promoting Tom Gentile’s Microcurrency Trader newsletter.

So, what is this newsletter all about then?

A couple of weeks ago, I did a detailed review of the Microcurrency Trader and I would urge you to check that out for a better analysis.

Here, I will share the main takeaways of that review:

I know Tom mentions that he is going to limit the number of new members to just the first 300 people who join, but in most cases, it is just a marketing tactic to create false scarcity and get you to commit to a subscription. You will probably be allowed to join any time you wish.

If you decide to join Microcurrency Trader, you will receive:

How much do you pay to join Microcurrency Trader?

A one-year subscription costs $2,095 and it renews automatically.

However, there is a “100% No-Risk Guarantee” whereby you can divert that subscription fee to any other newsletter that Tom offers if you don’t see at least 12 instances of gains worth at least 400% in your first year. Alternatively, you can get an extra year of Microcurrency Trader 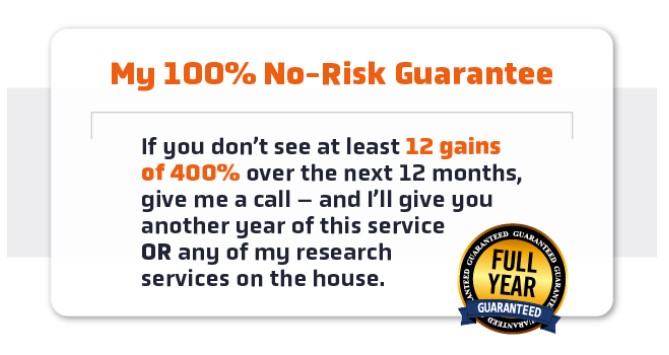 Closing Remarks on the “Largest Economic Shift in Society” Presentation

The Largest Economic Shift in Society is an hour or so of Tom Gentile talking about investing in altcoins (he calls them microcurrencies).

He claims that there will be a significant event likely to happen by the end of November. By that, he means that institutional investors (big money) will start participating in the microcurrency market and the supply of one of the largest microcurrencies will drop by about 30%. These two events will create upward pressure on the prices of a couple of digital currencies and that will lead to what he refers to as the “Largest Economic Shift in Society.”

Although Tom talks a good game about investing in altcoins, you should take it with a grain of salt because after all, he is promoting a newsletter.

Before you get excited about Microcurrency trading, bear in mind that it is full of risk and Tom warns you about that when he says that although you don’t need a lot of money to invest in them, you should only invest money that you are willing to speculate with because you can either lose it or earn a profit.