I stumbled across Joel Litman’s new presentation with the header, “Discover The #1 Stock That Could Skyrocket 80% (Or More) During America’s New Megatrend… The End of The Office.”

Right off the bat, the impression I got was that he was teasing a stock that would ride on what he considers a new megatrend; therefore, I set out to find out all I could about the presentation.

I put together this piece to give you a concise overview of the presentation so that you can decide whether Joel’s assertions are worth your while.

What is Office Doomsday (The Pitch)

Office Doomsday is the title of Joel Litman’s new presentation in which he promotes one of the advisory services published by Altimetry called Hidden Alpha. 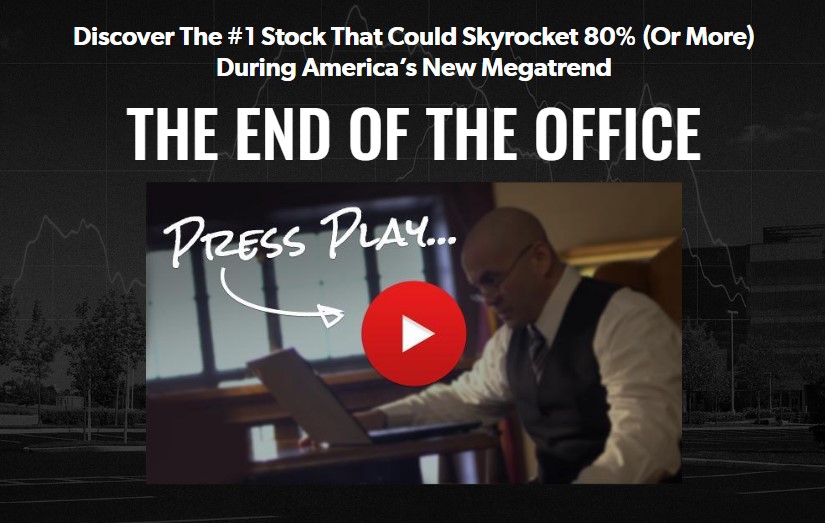 But there’s more to the presentation beyond pitching the newsletter – Joel subtly eases you into it by talking about a new megatrend that he believes is taking over the world and a couple of stocks are bound to soar due to it.

The megatrend he is talking about is “the end of the office” or how people have started working from home rather than an office due to the restrictions put in place to curb the spread of COVID-19.

As the coronavirus pandemic ravaged the world, many governments around the world imposed restrictions on people’s movements to stop the spread of the virus. One of the consequences of this was that people who’d normally commute to an office building for work had to work from home.

People also started ordering goods online rather than visit a brick-and-mortar store and also generally relied on online sources of entertainment since they weren’t allowed to go to theaters, malls, or stadiums.

Joel realized that this was sparking a revolution that resulted in some companies thriving – we will get to them in a bit.

Circling back to the work-from-home trend, Litman believes that companies will scale down on their reliance on office space:

“The office at this point is turning into nothing more than a place to go hang out with co-workers or have the occasional in-person team-building event rather than a place you’re required to be 9-to-5, five days a week.”

And, as a result, this will create a large economic shift:

“That makes this is one of the largest economic shifts in history and it’s happening seamlessly, under our noses, with barely any fanfare.”

He says that investors must find a way to profit off of this trend and shares examples of companies that have done well.

12 stocks to invest in during the “At-Home Revolution”

Joel tells us that he has identified 12 companies that will flourish as people transition to working at home.

Although you should take that statement with a grain of salt, the takeaway is that he thinks 12 companies will benefit from this trend. One of those companies is Dropbox, Inc. (DBX), which he says his system gave an A; implying it is a good candidate for investment.

He notes that this goes against what most analysts have said:

“While the world thinks this company is losing more money every year, you can see by looking at the blue bars that this company is becoming more and more profitable every single year…”

Here is the chart he is referencing:

I will discuss his screening process later in this article.

He has divided the 12 companies into four categories and written special reports revealing and analyzing each of them:

To get your hands on the four reports, you have to sign up for the newsletter, Hidden Alpha.

How Joel picks his stocks

To arrive at the 12 names, Joel says that he and his team identified 120 companies and narrowed them down to the ultimate list of 12. He claims to have used a proprietary forensic accounting process. He describes it as follows:

“We used our Forensic Accounting Analysis Method to locate companies with enormous discrepancies between what the market believes their as-reported value is, and what their TRUE value is once 130-variables are adjusted for.

After boiling the list down, we applied more filters by reviewing the company’s strategy, if management is focused on the same issues as investors, and we even analyzed the audio of the earnings calls.

Out of those initial 120 companies we ended up with just 12 top picks.”

The premise of his process is that there usually are discrepancies between the value of a company according to GAAP stipulations and its “real value.” Litman says that what gets reported in the media – according to the Generally Accepted Accounting Principles (GAAP) – gives an inaccurate picture of the actual financial health of a company.

Therefore, his proprietary forensic accounting process is meant to unravel the true picture of a company’s financial state to enable him to determine whether it is likely to perform well in the market as its true value comes to the fore.

To learn more about the process, you can read about it here.

Who is Joel Litman?

Joel Litman is the chief investment strategist, the CEO, and president of Valens Research. He started the firm in 2009, putting together a team of over 100 accounting professionals and investment analysts. He says that top management firms regularly use their data, research, and analysis.

Joel conducts seminars for financial and industry conferences such as CPA and CFA chapters. He is also the chair of the UAFRS advisory council that spearheads something called uniform accounting, which spots hidden trends using a forensic accounting process – it is an ever-present feature of almost all advisory services offered by Altimetry, the publishing branch of Valens Research that works like Empire Financial Research.

He has appeared on CNBC and has been featured by Barron’s, Seeking Alpha, Forbes, and Institutional Investor. He has also guest-lectured at Wharton, Harvard Business School, and the University of Chicago Booth.

He is the co-author of a book called DRIVEN: Business Strategy, Human Actions, and the Creation of Wealth.

What is Hidden Alpha (The Newsletter)

Hidden Alpha is a newsletter that is headed up by Joel Litman. When you sign up for it, you will receive insights into new trends so that you can get in on companies before share prices soar.

In addition to the four reports I mentioned earlier that you receive as a member, you will also receive an additional report called 14 Stocks To AVOID Like The Plague! It has the names and symbols of companies that may not be suited to the “At-Home Revolution.” Zoom (ZM) is among them.

You will also receive an issue of Hidden Alpha every month, access to the model portfolio, and customer care services.

How much does it cost to sign up for Hidden Alpha?

You have 30 days to review your subscription. If you cancel within that period, you are entitled to a refund.

The key takeaway from the Office Doomsday by Joel Litman is that many businesses are shifting away from requiring employees to physically show up at an office; instead encouraging them to work remotely from their homes. As a result, companies that cater to the needs of people spending the majority of their time at home are thriving.

Starting with a sample size of 120 such companies, Joel used a proprietary forensic accounting process to narrow it down to 12 companies. The process determines the true value of a company, which he insists is not always the same as the publicly declared value. The companies that made the cut are those whose true value is lower than how they are valued as per GAAP guidelines.

Dropbox Inc. is one of the companies on the list. To reveal the remaining 11, you have to sign up for a newsletter published by Altimetry called Hidden Value.