I came across a presentation by Roger Michalski where he teases 5 “Guardian Angel Stocks” and decided to take a closer look at it.

The five stocks were picked by Jim Woods, who determined that they were likely to help investors “survive pandemics and recessions.” He also singled out the first pick as “an eCommerce powerhouse set for a 4,327% gain.”

In this article, I present you with a quick overview of the five stocks and I also reveal the name of the “eCommerce powerhouse” that Jim is talking about.

What is Guardian Angel Stocks? (The Pitch)

Although the summit was presided over by Roger Michalski of Eagle Financial Publications, he was teasing five companies that were picked by an investment guru called Jim Woods.

Jim wrote a report called Guardian Angel Stocks: 5 Ingenious Ways to Survive Pandemics and Recessions and in it, he had five companies that he believes are the best to buy and hold as the coronavirus pandemic rages on. 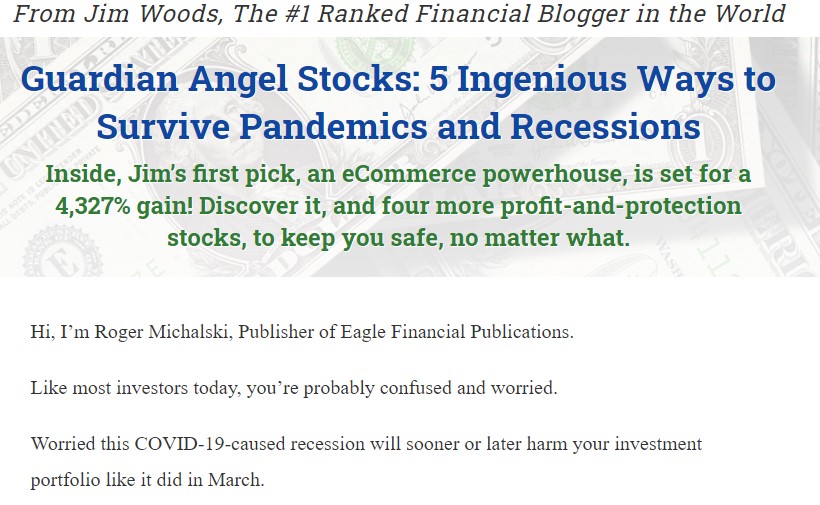 He says that they will be great bets during a recession that is yet to come. This sentiment reminds me of Martin Weiss and Andy Snyder who both did presentations warning us that there will be a recession in 2021.

Going back to the stocks, he says that they will be dominant in their respective sectors. So what are these five stocks he is going on about?

The first stock is of a relatively small company that is jostling with Amazon for a share of the online market place. Here is how he describes it:

“Over the past year, its shares have gained 92%, rising almost 4x higher than Amazon’s shares.”

“In 2019, nearly 300 million consumers around the world purchased goods from merchants selling on this company’s platform.”

“This is how the company’s CFO explains their past and future revenue growth:

‘… As the world retools for lower touch commerce. We have a healthy debt-free balance sheet and a strong cash position [$2.4 billion] and a proven disciplined capital allocation approach to ensure we can operate effectively even through what may be an extended recession.’”

‘…The company is in the midst of a breakthrough moment wherein the company turns into the e-Commerce backbone for every small-to-medium sized business (SMB) in the world over the next few years.

“This is arguably the market’s most exciting and powerful growth stock, with tons of upside potential still left.’”

After doing my research, I found out that the company he is touting here is Shopify (NYSE: SHOP). Shopify is a Canadian e-commerce company that also has point-of-sale systems. Jim is spot on with this one because it was one of the best-performing stocks of 2020 owing to rising sales during the pandemic as more people preferred shopping online to going to brick-and-mortar stores.

The second company is a gun manufacturer bidding for a military contract to supply the next combat rifle to be used on the frontlines:

“A ‘Made in America’ rifle, which Jim believes our soldiers will carry into combat for decades to come.

The company producing it is one of the five largest defense contractors in the U.S.

It’s a company that has a long, successful history of making guns for the U.S. military.”

“And the icing on the cake… the company pays a dividend yielding 3.18%.

Note: The company has grown its dividend for 22 consecutive years, increasing its dividend by an average of 10.29% each year.”

Although I am not entirely sure about this, I think that it could be Olin Corp. (NYSE: OLN). I went with Olin because it is the only weapons manufacturer I could think of that has been consistently paying dividends for the past 25 years.

The third guardian stock is in the health sector and it develops robots that conduct surgeries:

“Its robot is FDA-approved to conduct surgeries not only on soft tissue, but also on bones and joints.”

“It’s the first robot approved to conduct knee, back and brain surgeries.”

“Its patented imaging technology provides x-ray-based 3D modeling of a patient’s anatomy. Other robotic systems use MRI or CT scans, which increases costs for insurance companies and radiation exposure for patients.”

“Analyzing knee structures of both men and women… plus 1,500 different bone types from 26 different ethnicities.

The company designed the first anatomically accurate artificial knee personalized for every patient.

Understandably, this company is now on the road to capturing the entire knee replacement market.

As of 2019, the company’s robotic assistants are the next gen of robotic medicine, and soon its investors will be loaded.”

In that regard, it fits Jim’s description.

The fourth company is benefiting from people moving from cities to the open country as more companies allow their staff to work remotely.

“This company caters to the growing country-living crowd.”

“Technically speaking, this company’s shares, as of May 28, have broken out to a new 52-week high. A move that’s definitely bullish, and one of my key triggers when deciding if it’s time to squeeze the trigger. Yes, I like to buy stocks on a breakout, because that’s when they really begin to gain bullish escape velocity.”

Unfortunately, I couldn’t identify this company because Roger doesn’t really share enough clues about it or even tell us what it does to “cater to the growing country-living crowd.”

“And the company Jim recommends on Page 14 is a fast-rising star within the telemedicine niche.

It offers its services to individuals and hospitals in 130 countries, providing millions of patients around the world with access to affordable healthcare.

I couldn’t identify this fifth pick too because there aren’t enough hints to help out. The description is quite vague.

To get the special report that Jim wrote about the five stocks, you have to subscribe to Jim’s newsletter, the Intelligence Report.

Who is Jim Woods?

Although Roger describes Jim Woods as “the world’s #1 ranked financial blogger,” he is a 20-year veteran of the markets with experience as a hedge fund trader, broker, financial writer, and newsletter editor.

Jim, a former US Army paratrooper, holds a BA in philosophy from the University of California.  He used to work with William J. O’Neil whom he helped author a training course in the CANSLIM stock-picking philosophy.

He has co-authored and ghostwritten books and articles as well as edited content for some of the industry’s biggest names. His work has appeared on StockInvestor.com, InvestorPlace.com, MarketWatch, Main Street Investor, and Street Authority.

A firm called TipRanks rated him as the No. 3 financial blogger in the world out of 6,000 entrants.

What is the Intelligence Report? (The Newsletter)

The Intelligence Report is a financial newsletter that is published by Eagle Financial Publications and edited by Jim Woods. When you sign up for it, you get:

How much do you pay to join Intelligence Report?

If you cancel your membership within 30 days, Jim will refund your money in full.

Jim Woods wrote a report detailing five companies to buy and hold that he felt can protect you from an impending recession. The first three are:

I couldn’t determine what the remaining two were because the clues were scanty. But we know that they are both tech companies.

As is usually the case, the five stocks were teased to entice you to sign up for the newsletter with the promise of receiving a constant stream of recommendations. If you feel amenable to Jim’s prediction, you can give that a try at $49.95 for one year.

But as you do so, ensure that you unsubscribe to the Bullseye Stock Trader (that you get a 3-month trial of) before that trial run ends to avoid being charged for something you don’t want – if you like it, you can join it for $1,995.