Jim Rickards did a presentation called the C.O.B.R.A. Tactical Profits Briefing to promote his ideas about investing in currency markets.

For years, he has been telling people that the currency market is open for investment if you find the right approach. In this virtual event, he talks about a proprietary system he can theoretically use to profit massively from this market.

In this article, I walk you through the presentation to uncover what Jim Rickards is talking about and what product he is promoting.

During the Jim Rickards’ C.O.B.R.A. Tactical Profits Briefing, Jim talks about “the next world war.” 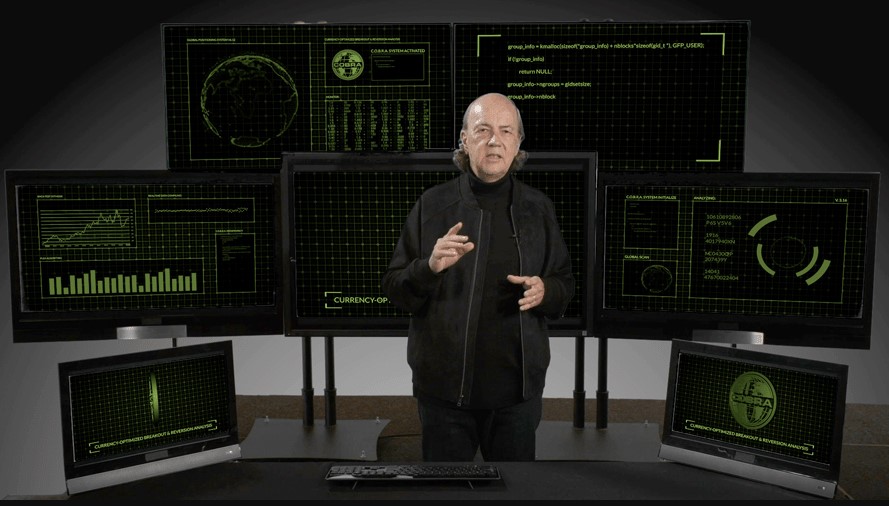 He says that it will not be fought conventionally with bullets, bombs, and missiles, rather it will be fought through things like technology, policy, money, trade deals, and even pandemics.

He says that they are all going to be weaponized as part of a new domain of international combat that will affect all of our lives, especially financially.”

What does he mean by “a new domain of combat”? He is talking about economic warfare.

He says that he has been predicting the rise of this kind of warfare for two decades and now that it is taking center stage, he is ready for it.

Jim Rickards claims that asymmetric combat is forcing $6.6 trillion to change hands every day. But with his years of asymmetric warfare study and analysis and close ties with Washington, he has developed a new 100% proprietary system for knowing how to make the most of this daily flow of capital.

Jim’s system is powered by supercomputer algorithms and driven by cutting-edge intelligence that only someone like him could gather. The system is called C.O.B.R.A.

C.O.B.R.A. is a trading research system that Keith developed to analyze capital flows that result from international economic warfare.

The Initials in C.O.B.R.A. stand for Currency-Optimized Breakout and Reversion Analysis.

Jim says that he wants to help you trade and profit from all kinds of economic strife through currencies. The currency market is the biggest and most liquid tradable market with a daily volume of $6.6 trillion.

Why is Jim Rickards focusing on the currency market instead of the stock market?

First, he says that stocks are affected by public opinion but currencies aren’t. And, you don’t have to do market, sector, and financial research like you do with stocks.

Second, he prefers currencies because they are range-bound; no need to worry about huge price fluctuations.

The C.O.B.R.A. system finds investment opportunities during breakouts and reversions.

A breakout happens when there is a currency’s price goes up or goes down significantly. Rickards’ system is equipped to spot those instances:

“Breakout trades happen when a currency’s price “breaks out” of its longer-term pattern — either to the upside or the downside.

The way C.O.B.R.A. detects these breakouts is when the “cobra tongue” appears.” 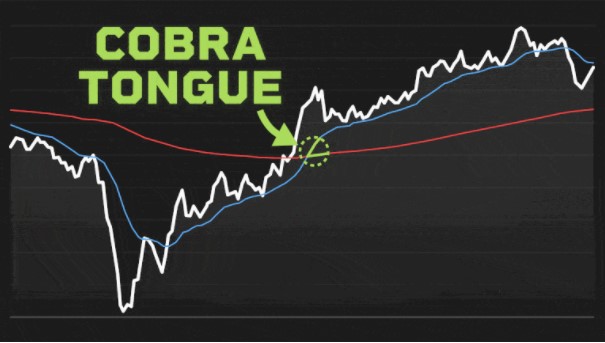 “It’s strongly predictive of rising prices in the near future.

When it crosses below the red line, it usually means the price will go down.

Both signals are equally valid — and C.O.B.R.A. is happy to find one of them.

Just to be clear: These lines are not just simple moving averages…

The C.O.B.R.A. system is designed to look for a confirmation signal after any breakout. This signal has to be there for him to issue a formal “buy now” recommendation for any trade.

The signal typically occurs within 30 days of the “cobra tongue” signal and if it doesn’t, the system automatically flags the trend as null and void.

A Reversion happens when the price reverts to the long-term average:

“With breakout trades, we’re trading price movements away from the longer-term average — either higher or lower…

Reversion trades are just the opposite.

We’re attempting to trade price movements that revert back toward that long-term average, after they’ve deviated from it substantially.

We call the indicator we’re using to find these movements the ‘cobra fang.” 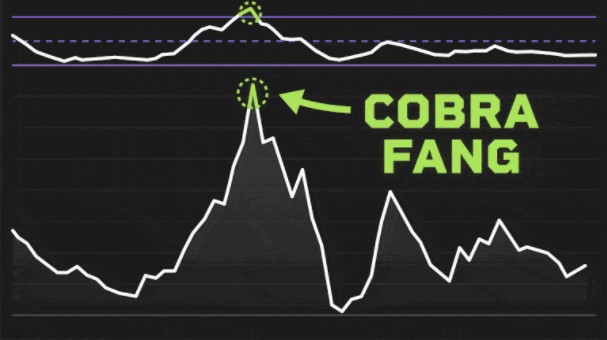 “That upper graph shows the price in terms of its deviation from the average, like in my C.O.B.R.A. dashboard.

You see that dotted line through the middle there?

Again, that’s the long-term average price of this currency — expressed as a perfectly straight, flat line.

Rickards notes that the price of the security reverted to its average shortly after the “fang” appeared.

If you buy put options at the peak of the spike as the price reverts towards the average, you earn big profits.

Jim Rickards admits that the examples he gives throughout the presentation of the C.O.B.R.A. system at work are all theoretical. He has never tested the system with real-life trades.

He mentions that he is using past data:

This new system of mine could lead you to 39 or 40 substantial profit opportunities every year, theoretically.

That’s a trade about every nine days, on average — if not more.

What’s even more impressive is that my new system pinpointed winning trades with 90% accuracy in these past-data simulations.”

He claims that if his back-test trading simulations in past data hold in real life, his new system could lead you to 39 or 40 substantial profit opportunities every year.

If you decide to follow Jim Rickard’s advice, you won’t be trading currencies directly. He has a few reasons for this.

First, he says that trading currencies directly on the Forex market can be daunting for average investors because there is a lot of jargon to know. This includes things like “lots” and “pairs” and “swaps” and “bids” and “asks” and “spreads” and “pips” and “pipettes” and more.

He says that it is like learning a foreign language.

On top of that, he says that you need the help of specialized brokers to trade directly on the Forex and you have to understand concepts like margin requirements and trading leverage.

Jim says that all C.O.B.R.A. trades are simple options plays on a specific pool of currency-tracking ETFs. You can trade them with your standard brokerage account. Options are quite popular within the world of financial newsletters as there are newsletters like Power Options and Super Options by other gurus that focus on them.

He says that options have the advantage of enabling you to trade both upside and downside price moves and to radically increase the profit potential of trades through leverage.

But he warns that options trading is more complicated than simple buy-and-hold investing. He adds that it is a riskier strategy than some people are comfortable with and is, therefore, best suited for people who aren’t afraid of taking on greater risk for the chance at a greater reward.

Who is James Rickards?

James Rickards is a lawyer, economist, and investment advisor.

He has worked for notable institutions like Citibank, Long-Term Capital Management, and Caxton Associates. His clients now include government directorates and institutional investors.

In 1998, he was the principal negotiator of the rescue of Long-Term Capital Management sponsored by the Federal Reserve.

Jim Rickards is a guest lecturer in finance and globalization at Trinity College Dublin, The Johns Hopkins University, The Kellogg School at Northwestern, Georgetown University, and the U.S. Army War College.

He is an advisor to the US Intelligence community on capital markets. From time to time, he has also served as an asymmetric warfare advisor to the CIA and Department of Defense. He is on the Advisory Board of the FDD Center on Economic and Financial Power in Washington DC.

Jim Rickards is the Editor of financial newsletters Strategic Intelligence, and the Crash Speculator.

Jim Rickards’ Tactical Currency Profits newsletter is published by Paradigm Press. It gives you access to the $6.6 trillion currency market.

Jim says that he has vast experience as a key player in top-secret currency war games that are conducted by the CIA and the DoD to simulate and prepare for global economic warfare. Therefore, he believes that he is the perfect person to help investors deal with it.

When you sign up for Tactical Currency Profits, Rickards will not be giving you currency recommendations; you won’t be trading currencies directly.

Instead, you will use 16 securities that are either directly indexed to a major global currency or influenced by one such currency. Then you will trade the options that are pegged to those securities.

What is included in Tactical Currency Profits?

When you sign up for the newsletter, you will receive:

In addition to these perks, you also get these two bonuses: 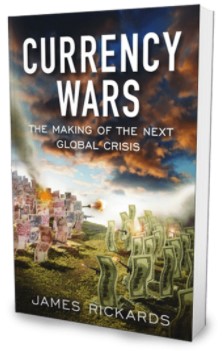 A newly updated copy of James Rickards’ book, Currency Wars: The Making of the Next Global Crisis.

Rickards covers all that you need to understand regarding his C.O.B.R.A. trading system in the guidebook. 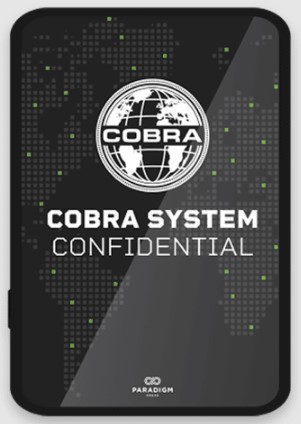 He reveals the 16 specific currency-tracking and currency-related assets in the C.O.B.R.A. trading pool, the basics of options trading, and a deep-dive into the three-year “backtest” he used to test the new C.O.B.R.A. system.

You’ll pay $1,995 for a full year’s worth of this newsletter and service.

The fee you pay for Jim Rickards’ Tactical Currency Profits is NON-REFUNDABLE.

In this presentation, Jim Rickards asserts that he thinks that we are in the blink of war. However, it will not be through weapons of mass destruction but economic. He says that it will happen through currency markets.

He has a system called C.O.B.R.A. that finds the perfect time to invest in a currency (albeit indirectly through ETFs). He says that it is a solid system that will help the average investor.

Before you get into any trade, remember that Jim Rickards has not tested his system in the real market with real money. He just did backtesting, which is not always the most effective way to determine whether a trading strategy is good. This means that Jim does not know for certain whether his system will perform as well as the simulations suggest.

This is not unique to Jim Rickards because even the best trading strategy on paper can still underperform when it is implemented in real life. Therefore, if you decide to follow any of his recommendations, you should not invest more than you are willing to lose.