Jeff Clark’s presentation titled “Trader’s Paradise” is about a new perspective to investing that he wants to share with his readers.

It concerns a move that could double your money in the stock market. On the landing page, it reads:

“today is the worst time in 20 years to own stocks… and how an upcoming move could double your money 10 different times if you know what to do.”

So, he seems to be urging people to stop owning stocks and go for a different strategy that will make them more money. In this article, I tell you what strategy this is.

What is Jeff Clark’s Trader’s Paradise?

Jeff Clark’s Trader’s Paradise is an event by Jeff Clark (hosted by John Burke) in which he predicts that there is a rare market move likely to happen soon that will make it a bad time to be a shareholder. 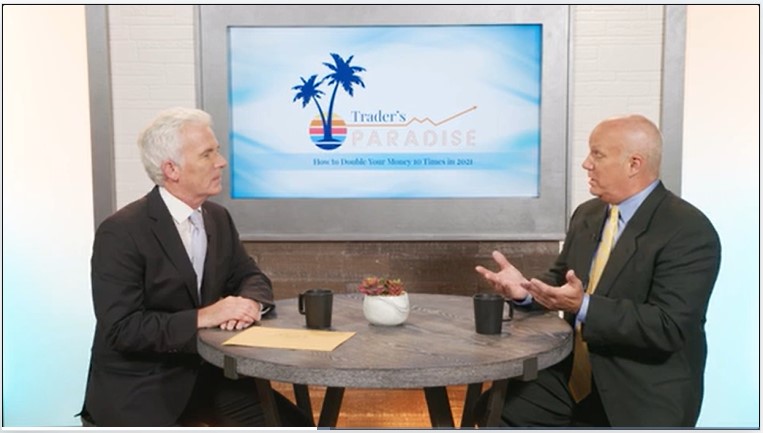 He calls it a “zero-sum” market in which he says that “stocks will chop back and forth, unable to make any gains.”

Jeff claims that Apple and Netflix have been impacted by the zero-sum market phenomenon for over a year and almost all other public companies will be doomed to the same fate this year.

According to Jeff, a zero-sum market has come just twice in half a century.

He says that when it happens, it can double your money multiple times in a couple of months.

Jeff says that the last time he made a warning as big as this was in 2019 at a major speaking event where he told his audience to avoid a company called Wayfair.

Wayfair is a retail company whose stock later fall 59% by March 2020 (he fails to mention whether this depreciation may have also been caused by the economic fallout of the coronavirus pandemic).

In a separate event, Jeff told his listeners that a Chinese education company called GSX Techedu, which had risen by up to 500% the previous year was about to plunge.

He was right about it too because it went on to fall by about 72%.

In giving those examples, he sets the tone for his newest warning; he says that there is another popular stock that could be headed for a big fall, like the others, and he wants you to avoid it.

In one of his articles promoting the summit, Jeff Clark says that the best thing to do right now is to be a day trader.

“You see, being a trader simply offers better opportunities to make money than buying and holding. And if you’re a buy-and-hold investor, heed my warning – what’s coming in the weeks ahead could wipe out all of your open capital gains…

We’re headed towards a rare market that we’ve only seen twice in the last 50 years. It’s called a ‘zero-sum’ market, and it’ll be a nightmare for shareholders. However, it’ll be a trader’s paradise.”

He wants to convince you to become a day trader because he sees it as being more rewarding than buying and holding.

Why is he saying this?

He says that we are headed for a zero-sum market situation that will be a nightmare for people who hold stock.

To understand how this works, let’s learn more about the “zero-sum” market phenomenon.

The Concept of a Zero-Sum market

In an article titled “Day Traders Work in a Zero-sum Environment” on the dummies.com website, I found the closest definition to what Jeff Clark is describing.

The description defines day trading as a zero-sum affair:

“Day trading is a zero-sum endeavor; it has exactly as many winners as losers. And options and futures markets, which are popular with day traders, are zero-sum markets. If the person who holds an option makes a profit, then the person who wrote (which is option-speak for sold) that option loses the same amount. There’s no net gain or net loss in the market as a whole.”

However, it is a short-term phenomenon because, in the long run, the market can rise or fall (usually it trends upwards as value is added to it).

“…the stock market is not a zero-sum game. As long as the economy grows, company profits grow, which in turn lead to growing stock prices. The stock market really has more winners than losers over the long run.”

Going by that definition, I think Jeff Clark is talking about options-trading, which is something he has been writing about.

We’ve seen him talk about it in presentations like $20 Trillion Stampede and 3 Stock Retirement Blueprint.

Jeff Clark is an editor who publishes several investment advisory services that focus on making money from options trading.

He wrote curricula for an international MBA program and founded an investor education firm before he got into the financial services industry.

Before he started publishing his work via JeffClarkTrader.com, Jeff Clark was the editor of two newsletters that were being published by Stansberry Research: Pro Trader and The Short Report.

And before that, he was working for a San Francisco-based brokerage house and private money management firm. His clients were among 100 of the wealthiest people in California.

Jeff Clark’s approach depends on the situation; sometimes it is conservative and other times, it is speculative. He says that this enables him to make money no matter how the stock market moves; up, down, or the same and it makes him the best at what he does.

Jeff Clark says that he will guide you through the “zero-sum” market. But first, you have to read his free report:

“In his new report, Jeff will give you an overview of exactly what he predicts, and why you must prepare now for the free recommendation he’ll make…”

You receive the report when you sign up for it by providing your email address.

Jeff Clark’s Trader’s Paradise event is about options trading. This doesn’t come as a surprise because Jeff runs a variety of options-based trading services.

The options market can be considered a zero-sum market, at least in the short term because for every transaction, theoretically, there is a winner and a loser.

Jeff wants you to start trading options to take advantage of the stock market’s movements, which include uptrends and downtrends.