Jeff Clark’s $20 Trillion Stampede is an event that will be hosted by the options analyst during which he will explain why he expects the market to boom.

As the market booms, he believes that it will create opportunities for investors to earn double returns in two weeks – something he will also be covering at the event.

To learn more about the event, keep reading this article where I delineate what we can expect the event to be about.

What is Jeff Clark’s $20 Trillion Stampede?

Jeff Clark’s $20 Trillion Stampede is an event during which Jeff will explain why he expects the market to boom. 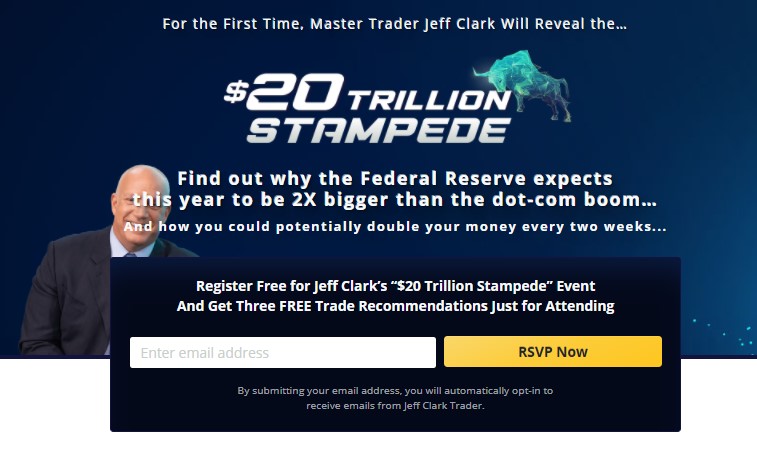 He says that the stock market has been on a roll the past year with more than $20 trillion coming in as investment. As a result, 2,887 stocks have soared 100% or more. At the same time, he has revealed to his followers up to 3,000 chances to double their money (equating to over 50 times per week on average).

He says that the Federal Reserve is predicting that this year will witness a peak twice as high as the peak of the Dot-Com Boom in the late nineties.

The Dot Com Bubble was a period during which the stock market spiked due to the excessive speculation of internet-related companies. It was a period when the world was starting to adopt the internet. The NASDAQ Composite Index rose 400% but later fell by 78% by the end of the third quarter in 2002. By that time, several internet-based companies with unsustainable business models had shut down.

Some like Amazon (AMZN) and Qualcomm (QCOM) survived, albeit losing significant value in the process.

As this happens, Jeff claims that you will have the chance to “potentially double your money — every two weeks for the next year.” And, of course, he will show you how to achieve that in his webinar.

He also says that such an opportunity will not come around again for another 20 years – assuming he is counting 20 years from the turn of the millennium when we had the Dot Com Bubble.

If any of Jeff’s previous work is any indication, this probably has to do with investing in options since it is one of the few ways you can record such gains in such a short period. Jeff Clark is also not a stranger to this as we’ve seen him emphasize it countless times before; presentations like 3 Stock Retirement Blueprint and Pre-Programmed Stocks come to mind.

In summary, here is what you can expect from the event:

Jeff Clark is an investment analyst who runs investment research services that focus on profiting from the options market.

He began his career in finance at the age of 19, and by the time he was 27, he had become an elite money manager overseeing a $200 million account for ultra-wealthy individuals. Some of his clients included Silicon Valley insiders, executives, and even pro athletes.

He then joined the world of newsletter editing and for 15 years, he ran two newsletters at Stansberry Research, namely Pro Trader and The Short Report.

He asserts that his strategy is usually either conservative or speculative depending on the situation.

You can attend the $20 Trillion Stampede event for free on Wednesday 28th April at 8 PM Eastern Time.

You can register for the event to “book your seat” as it happens by providing your email address on the registration page.

Remember that by registering using your email address, you automatically opt into the Jeff Clark Trader mailing list. This means that you will receive promotional emails from Jeff.

Jeff Clark’s $20 Trillion Stampede will be all about his investment strategy, which he says will enable you to double your money in two weeks. This will be facilitated by a rising stock market that will grow 2X bigger than it did during the Dot-Com Boom – and he says that this is according to the Federal Reserve.

As we’ve come to expect of such events, he will promote one of his advisory services and we can safely assume that it will have to do with options trading – a specialty of Jeff’s.

If you cannot attend the event as it happens, you don’t have to worry about it because he will release a recording of it and release it for free.