Brownstone Research has been pushing this presentation by Jeff Brown titled “The Great Reset” so I decided to take a closer look.

From the header, Jeff mentions that there is some sinister plan being pursued by the Fed and other banks that may affect every American.

I went through the presentation and put together this review explaining what Jeff meant by this. Read on to learn more about it.

What is Jeff Brown The Great Reset? (The Pitch)

Jeff Brown’s recent presentation titled The Great Reset concerns what he refers to as a “sinister plan the U.S. Federal Reserve has been working on since 2015…” It also promotes his premium newsletter, The Near Future Report, but we’ll get to that in a bit. 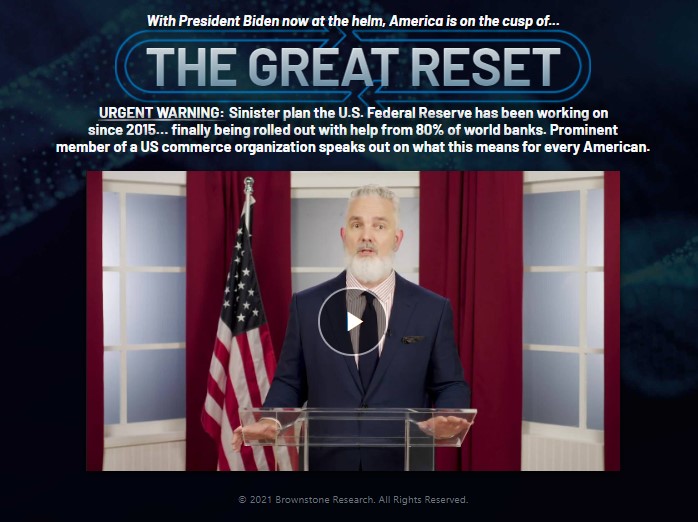 The presentation centers on a plan that the Fed has been working on with the help of 80% of world banks. It is the sort of plan that he talks about in a negative light, warning us about dire consequences to the ordinary citizen should it go through. He also mentions that Joe Biden ascending to power will help this plan along.

So, what exactly is he talking about?

First, Jeff walks us through various quotes by the World Economic Forum, the Catholic Church, and even Time Magazine talking about it. He mentions that “The Great Reset” has something to do with the trillions of dollars of new money that has been recently printed by world governments.

He insists that if you have more than $5,000 in the banking system, you should pay attention to what two large companies are doing right now:

“What I have come across, however, are some rather shocking developments going on in America right now that are deeply concerning.

In fact — if you have more than $5,000 in the American banking system today — there is crucial information you MUST know.

You see, as I’ll show you in a minute…

The two companies he is talking about are Apple and Google, which he says installed new technology to trace people’s movements using smartphones. But then he says that something even more sinister is about to happen.

He says that the “powerful folks behind the scenes” want to dismantle the American financial system and replace it with a newer, more inclusive system. And that system sounds a lot like a Socialist one as he explains:

“This ‘Great Reset’ has already begun. And its purpose — according to the powerful folks behind the scenes — is to dismantle the American financial system and replace it with a newer, more ‘inclusive’ system…

A dangerous new ‘system’ where climate change, sustainability, and ‘fairness’ are more important than our constitutional rights…

Where everyone gets treated as ‘equal’ and is guaranteed a basic ‘living wage’… no matter how hard they work.

And one where even personal property rights could become a thing of the past.

In other words, the global elites are hellbent on ending capitalism and replacing it with a new kind of ‘social’ economy — one where the United Nations makes the rules… prints the money… and has the power to elevate and extinguish the life of any business.”

In a nutshell, what Jeff is saying is that people’s rights will be curtailed. He then says that “the elites” are using the pandemic to seize control of the American way of life.

The sinister plan he is concerned about is the banning of cash and the introduction of a new digital currency. He says that when businesses stopped accepting cash, what appeared to be a precautionary measure to stop the spread of COVID was a trial run for a bigger move.

And that move was introducing digital currency to replace cash. He says that 80% of the world’s central banks have already started rolling out digital currencies and he gives examples of nations like Sweden, Bahamas, and China as some of those already with some form of digital currency.

He says that the American government has already started considering that when he says:

“Nancy Pelosi and her colleagues in Congress even slipped language into a draft of a pandemic stimulus bill… The measure would have set up every American with a “FedAccount” and replaced dollars with a Fed-controlled digital dollar.”

And he doesn’t stop there because he quotes Jerome Powell, the Fed chairman, talking about digital currencies and also mentions the Senate holding a meeting to push the “digital dollar.”

He even highlights Apple Pay and Google Pay being part of that and even gives the example of VISA patenting a digital fiat currency.

Why is Jeff bothered by digital currencies?

Here he is explaining his concern:

“But why are the elites so hellbent on banning cash?

When we have no choice but to use our smartphones to pay for everything digitally, the government can see everything we buy…

How much we spend…

Even where we go and who we’re with.”

It all boils back to over-surveillance and the loss of privacy. But it goes beyond that because he says that the government will create new money without constraint and they’ll also “withdraw” just as easily:

“But if they can deposit funds…

They can also withdraw, just as easily.

Earned ‘more than your fair share’ of money this year?

Your money is gone in an instant — and there’s nothing you can do about it.”

This, he claims, will give the government more control over your life.

What is Jeff’s solution to The Great Reset?

Jeff claims that the reset will give investors the chance to make money – more money in the next 6-12 months than they’ve made their entire life.

He says that the answer is not investing in gold, although it has been doing well. His reason for that is that the gains the precious metal offers will be insignificant compared to what you will get from two emerging technologies.

The first emerging technology is Bitcoin, which he says has been outperforming gold every year since 2011. He says that it is not too late to get in on it as it may reach $100,000.

The second one is financial technology or fintech. He mentions a company like Square benefiting from the fintech boom as a perfect example of how the nascent industry is gaining momentum. This brings us to his #1 fintech play for 2021.

He describes it as a firm that is perfectly positioned to take advantage of the government’s new digital currency rollout. He says that when cash is phased out, the new architecture will be needed for “digital currencies” and this includes things like ATMs, Cards, and apps being “revamped.”

Therefore, he expects this firm to help install the new infrastructure as it already services 95 of the top 100 financial institutions. He also says that it has been used to distribute COVID funds to millions of people.

He expects its value to triple as the “Great Reset” kicks on.

Since those clues were not concrete enough, unfortunately, I couldn’t determine what company Jeff was talking about here as we always do with these teasers.

He has written a report about it called My #1 FinTech Play for the Great Reset: How To Triple Your Money As Cash Goes Digital that he wants to send to you for free if you sign up for the Near Future Report.

He has a background in tech, having worked for decades as a high-level tech executive for the likes of NXP Semiconductors and Qualcomm. So, he has an impressive CV in that regard.

He claims to have retired from corporate life in 2015 to focus on sharing his “unique perspective on the technology sector… and offer up some choice investment recommendations.” He does that by writing financial newsletters and editorials.

He says that since he began doing that, he has made some calls that have ended up being big winners like recommending Bitcoin in 2015 and recommending “the #1 tech investments of 2016, 2018, 2019, and 2020” – he doesn’t specify which companies those were.

His newsletters, published through his firm, include Exponential Tech Investor, The Near Future Trader, and The Bleeding Edge (free of charge).

The Near Future Report is a premium newsletter edited by Jeff Brown and published by Brownstone Research. As mentioned above, you have to sign up for it to reveal the name of his number one fintech company via his special report.

Besides that, he is also going to send you another report for free called Elected by Blockchain: The Private Company Revolutionizing the Way Americans Vote. This one has the name of a company that he says is working on a way to use the Blockchain to make voting booths obsolete thus allowing people to vote using their smartphones.

There is another free special report called The New Economy: 5 Stocks That Will Soar in the “Post-COVID” World. As the title suggests, it has the names of five companies that will do well when the COVID-19 pandemic comes to an end.

He will send you a fourth report called Toxic Tech: 5 Tech “Darlings” to Dump Right Now. It has the names of five companies that will not do well and that you should avoid investing in.

There is yet another “moonshot” opportunity he wants you to take advantage of and it comes in the form of another report called The Top BioTech Buyout Candidate: The 2,200% Secret. It has the name of a private biotech company that is an ideal acquisition target.

Jeff Brown’s pitch about “The Great Reset” has two key purposes: sell you a newsletter service and talk about investing in Bitcoin and a fintech company (which I couldn’t identify). Although Jeff spends a large chunk of it talking about how the Fed and other central banks are conspiring to create a new digital currency, it boils down to investing in Bitcoin and that company.

It bears a lot of similarities to another presentation that was done by Nick Giambruno a while ago where he also conveyed the same message but proposed different solutions and investments. You can read my review of that presentation.

If there’s something you can take away from this presentation is that you should not be swayed by the tone of the presenter and should be objective as you analyze the message.