Jeff Brown’s latest presentation concerns what he refers to as a “private money revolution.”

An Epic Battle Is Taking Shape: Big Tech vs. Big Government – And No Matter Who Wins, Investors Could Reap Massive Gains in 2021”

In this article, I walk you through Jeff Brown’s key talking points if you are interested in what he is up to.

Jeff Brown has a reputation for teasing technology companies to his audience and in this presentation, he is focusing on the financial system.

He does not describe the stocks he wants us to buy so this article won’t be about revealing the names of some “hidden” stocks. 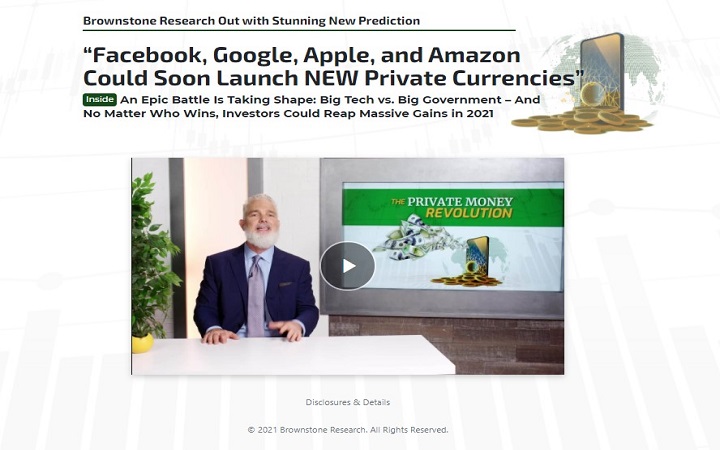 He starts the presentation by talking about how governments could lose their monopoly over money, which is something gurus typically say when they are about to pitch cryptocurrencies or the blockchain. And as we see later, the discussion inevitably heads down this path.

Jeff Brown’s angle is that big companies are creating their own digital currencies and these could create an investment opportunity.

“Mark Zuckerberg is planning to launch a new technology.

And he’s not alone.

As you’ll see, Amazon could be close on his heels.

Google has made a major move… partnering with Coinbase to integrate crypto into its Google Wallet.

And Apple may be getting in on the act, too.

If all goes as planned…

It will trigger a massive change to money, as we know it…”

Jeff Brown says that cash as we know it is set to disappear forever but if you understand what’s happening, you could set yourself up to make massive gains in the months to come.

Jeff believes that a new competing financial system (competing with the existing cash-based system) is taking root and the technology behind it will change the world in ways we can’t even imagine (obviously referring to the Blockchain).

He says that a battle is raging between the government (and the old world banks) and the top tech firms on the planet, who are coming up with digital currencies he refers to as “stablecoins.”

“Each of these [tech] firms is on the brink of launching their own private currency.

Something called a stablecoin.

In other words, a form of money not issued by any government.

A stablecoin is a digital asset that’s “tied” to something else.

Like an existing currency… or to the price of gold…

And they have many of the same advantages of a cryptocurrency in terms of privacy… speed… and ease of use.

Most importantly, they cut out the ‘middleman.’”

He says that stablecoins are better than cryptocurrencies because they are designed to remain stable and give you command of your money. You can also use them to earn a hefty interest rate that is up to 200 times more than you get from a traditional savings account.

Jeff says that these new currencies could serve as the new “global currency” alongside the US dollar.

He notes that Facebook’s new stablecoin, Diem is moments away from being rolled out and the company plans to release a few variants pegged to major global currencies.

How to Profit from The Private Money Revolution

Jeff Brown does not recommend that you invest in these “stablecoins.” He says,

“Don’t just load up on Google… Apple… or Amazon stock. Or any of the new “coins” they issue, for that matter.

The key to making money from this massive shift is understanding the system behind it.”

Instead, he wants you to focus on the technology behind them: the Blockchain.

“You see, most of these new competing currencies – including one being raced to completion by the U.S. Government – have one thing in common.

They’re only possible thanks to blockchain technology.”

He says Blockchain has the potential to disrupt every major industry, including banking, real estate, insurance, and healthcare.

To this end, Jeff claims to have identified three ways to play the massive shift. He says that they have the potential to earn far more upside than cryptocurrencies and the stablecoins.

He has put the details about them in a special report called How to Profit from The Private Money Revolution. 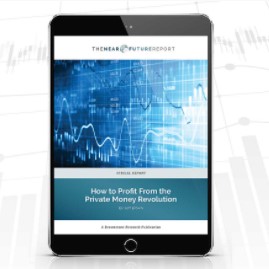 In the report, he provides details of the three blockchain stocks as well as how you can invest in them. You can get a free copy of the special report if you sign up for his newsletter: The Near Future Report.

Jeff Brown is the founder of Brownstone Research, an independent financial research firm that publishes newsletters.

He is the main editor of a couple of newsletters they publish, including Exponential Tech Investor, Blank Check Speculator, and The Bleeding Edge.

Jeff Brown has in the past few years been invited to Washington D.C. where he has played an active role in the Chamber of Digital Commerce. This body is the world’s top trade association for digital assets (new currencies like Facebook’s Diem).

People who serve the Chamber of Digital Commerce include insiders and executives from top tech firms.

Before Jeff Brown started working in D.C. he spent 26 years working for companies behind some of the most advanced technologies in the world. He was an executive at NXP semiconductors where his team helped develop important tech behind megatrends like autonomous vehicles.

Since he left the corporate world, he has been investing in small tech firms that show promise.

The Near Future Report is one of the newsletters Jeff Brown publishes via Brownstone Research.

Every month, he shares new insights into groundbreaking trends in the technology sector that can multiply your money. He does not focus on trends that are years away. Instead, he focuses on the ones that are right around the corner.

Jeff Brown claims that he is the perfect person to write about tech trends because he operates “inside Silicon Valley’s bubble.” He says that he sees and hears about breakthrough technologies months before they make the headlines.

In addition to the monthly newsletters, here is what you get when you become a member of The Near Future Report:

As for the new special reports, here are the ones you get along the main one (How to Profit from The Private Money Revolution):

Secrets of The Cryptocurrency IRA 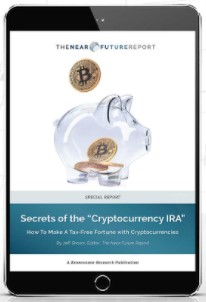 This report is about a special kind of IRA account that holds cryptos. Jeff calls the account “The World’s Most Safe and Trusted Crypto IRA Account”

“That’s because this special IRA account offers the best of both worlds. You get the upside of explosive gains from cryptos, and the peace of mind knowing that your money grows tax-free…”

He says that it is a perfectly legal investment tool that is approved by the IRS.

With it, you don’t have to worry about setting up wallets, complex passwords, or the technical aspects of cryptocurrencies.

The Perfect Crypto Portfolio to Multiply Your Retirement Funds by More Than 1,000% 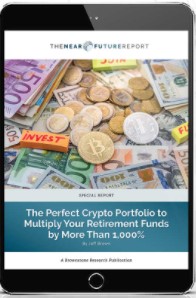 In this report, Jeff Brown reveals three cryptocurrencies he recommends every investor to add to their special IRA account. He even discusses how much you should allocate to each cryptocurrency.

It is a special report in which Jeff Brown has written about his number one 5G stock for 2021.

How much is The Near Future Report?

A one-year subscription to The Near Future Report costs $49 if you join via the link at the end of the presentation.

At the checkout page, it reads:

“If you decide The Near Future Report isn’t for you in the first two months, just give us a call at 888-493-3156 and we’ll refund your money and cancel your subscription — no hard feelings.

You can keep ALL of our special reports, for free, as a thank you for giving us a try.”

Jeff Brown thinks that big companies launching their digital currencies will elevate the Blockchain. Consequently, stocks associated with the Blockchain will make for good investment opportunities.

He is not the first person to urge people to invest in blockchain stocks and he certainly won’t be the last. There are dozens of companies that have incorporated blockchain tech into their operations or offer blockchain-related products or services to their clients. These are the stocks Jeff wants you to go for.

If you are looking for a quick return when you invest in blockchain stocks, you may end up disappointed because Blockchain technology has been around for ten years now and it is still in its infancy in terms of implementation.

As you invest in companies that will benefit from its growth you may have to be patient because it may take long for that to happen.