For the better part of last week, Jeff Brown was talking about a new kind of investment he wants you to involve yourself in this year.

Jeff will be hosting an event called “Jeff Brown’s Private Deal Room” where he claims that for the first time he will reveal the most powerful way to limit your downside in this crazy volatile market, without limiting your upside.

Let’s take a look at what he is talking about.

Jeff Brown regularly hosts webinars with his followers where he shares his latest insights into the capital markets. And in this particular event, he has been talking about a form of investment you should consider at a time when the capital markets have been faltering. 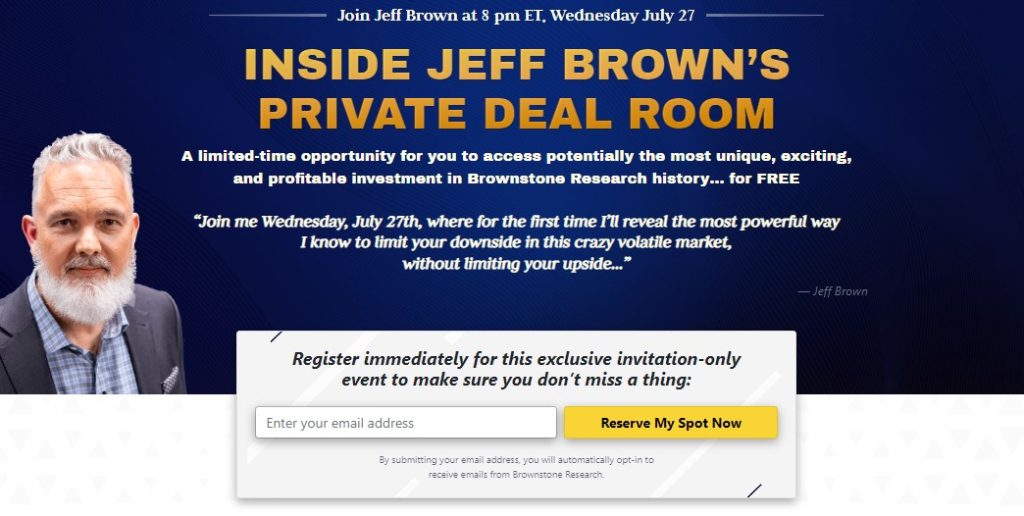 The stock market officially closed out its worst six-month start to any year, going back over half a century. For the first time in decades, the S&P 500 is down 10% with bonds also falling close to 10% since the start of the year. Some experts expect a full-blown recession.

At the same time, other conventional “safe haven” assets are in decline as I write this.

If you attend the event, here’s what you’ll get from Jeff:

He also intends to host a Q and A session where he will answer general questions about his approach.

What is Jeff Brown’s Private Deal?

As recession threatens, Jeff Brown believes that the best way to protect yourself if not grow your wealth is to invest in private companies.

In an excerpt from one of his articles for The Bleeding Edge newsletter, we get a sense of what we should expect him to talk about.

He says, and I quote:

“Private companies are one of the few assets that aren’t broadly affected by the decline in stocks. Yes, I do expect exits – IPOs and acquisitions – to decline this year. And it’s true we likely won’t reach the record VC levels we saw in 2021.

But private investments are not punished by the broader market volatility or the news cycle. Once we place an investment, we can just sit back, relax, and allow these companies to build and grow. And when the economy and markets get back on track, the revenues will follow.

And because we are investing at the earliest stages, the returns from quality private investments can greatly outpace the rate of inflation.”

Therefore, he prefers that you go for private companies rather than the stock market.

This echoes what he spoke about during his pre-IPO Code presentation.

Jeff Brown is an investment analyst who’s best known for being the founder of Brownstone Research – an independent financial publishing company that belongs to Stansberry Research.

Jeff, for close to thirty years, worked at the top level for several Silicon Valley tech giants. For example, he acted as the head of Global Strategy and Development at a division of Qualcomm, was a vice president at NXP Semiconductors, was the President at Trident Microsystems Japan, and also the President and Representative Director for Juniper Networks.

After Jeff stopped working for those big companies, he decided to focus on being a tech investor. He targets tech startups that show promise and finds the ones that he thinks are worth going for.

Jeff Brown sees himself as an angel investor and advisor to tech startups — more than 5 of his recommended picks have hit billion-dollar “unicorn” status.

He has been using his extensive knowledge of the technology industry to place good bets on high-tech companies before Wall Street or the media caught wind of them.

Jeff Brown claims that he has the uncanny ability to detect what lies ahead in the market and prepare for it accordingly.

Jeff’s firm predicted the peak of the dot-com boom, the collapse of the Soviet Union, the housing bubble, the top in Bitcoin, and even the election of President Trump.

He says that he has used his knowledge to show his more than 1 million readers worldwide how to profit in a relatively unpredictable market.

We’ve seen that he prefers to invest in private companies hoping that they come good so he can make money. He says that he has spent years building up his portfolio of private investments and he wants to let you in on the next wave of exciting private deals he is recommending in 2022.

He will share all the details on how these private investments work and how to build his stake in the next generation of exciting startups. He claims that he has found the ultimate recession-busting, inflation-fighting strategy that billionaires and insiders are using to protect and grow wealth in 2022.

On top of that, he says that these opportunities are open to both accredited and non-accredited investors. It will be interesting to see how his approach plays out and we will be following this and informing you of any important developments down the road.