Jeff Brown has been promoting a webinar he intends to host about how people can “profit from Apple’s launch.” Here is how he describes it on a pop-up ad on the Brownstone Research website.

“Join me and I’ll reveal a unique inflation-proof way you can profit from Apple’s launch event alongside Elon Musk, Warren Buffett, Mark Cuban — and potentially make as much as 21 times your money as this situation plays out.”

In this article, we will be taking a closer look at what he is talking about as well as what we can expect from the event.

The Confidential Briefing by Jeff Brown is an event that has been getting a lot of traction from people within the world of finance and investing because it concerns an investment that we are promised could potentially earn as much as 21 times our money (if everything works out as Jeff envisions). 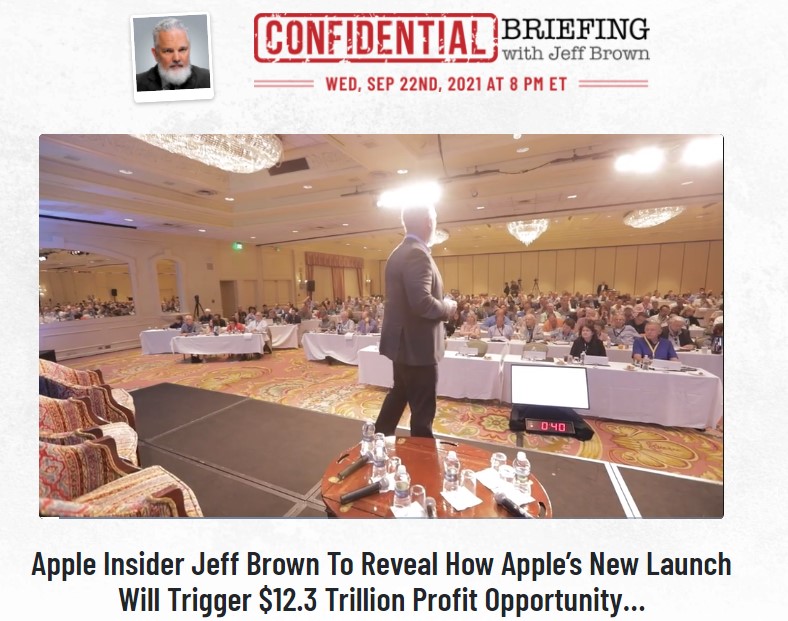 It involves the Apple launch event, which he claims will trigger a $12.3 trillion profit opportunity and create 21 times more wealth than the iPad, Apple Watch, and the iPhone.

Jeff Brown is not the first guru to talk about Apple launch events sparking new investment opportunities. A while back, I encountered a presentation by Ray Blanco about what he was regarding as Apple’s Greatest Breakthrough Yet.

Circling back to Jeff Brown’s presentation, he says that Apple has made an announcement that will create a massive investment opportunity. He claims that investors like Elon Musk, Warren Buffett, and Mark Cuban have already positioned themselves for what’s coming and he thinks we should follow them (under Jeff Brown’s guidance, of course).

What Apple Launch Event is Jeff Brown Talking About?

In mid-September, Apple hosted an event during which they launched a couple of devices, including the latest iterations of the iPad and its mini version, the Apple Watch, and the iPhone.

The iPhone 13 has a series of new interesting features, but the one that probably interests Jeff Brown most is its 5G capabilities. The new iPhone is 5G enabled and it appears that it will go for the Mid-band 5G rather than the mmWave (particularly outside the US).

But whatever version of 5G it goes with, Jeff brown sees an opportunity for investors to cash in.

How does he want you to invest?

He goes the familiar route adopted by many newsletter gurus: backing the Apple suppliers who may benefit from mass 5G adoption. In a piece he wrote promoting this event, here is what he said about this:

“…Apple’s suppliers can offer investors a great opportunity to profit. As Apple’s request shows, the more successful Apple’s products are, the more demand its manufacturers receive.

This has been especially critical due to the release of Apple’s 5G-enabled iPhone last year. 5G phones require more hardware than previous generations, especially since they still need to be backward compatible with 4G networks while nationwide 5G spreads.

And as many of these companies are currently smaller than Apple, they can still have the chance to double… triple… or more.”

He wants you to back the pick n’ shovel companies rather than Apple itself because they have more room to grow (in terms of share price). The argument is that even a big announcement such as this one won’t move the needle as much for a company as big as Apple.

Out of the many suppliers, Jeff has found one that he thinks you should consider going for and he refers to it as his “Top Tech Stock for September 2021.” He promises to reveal its name and ticker symbol at the Confidential Briefing.

Jeff Brown is an investment analyst who founded Brownstone Publishing in 2020, where he is the chief analyst.

Jeff began his career in America but spent a majority of it in overseas markets, which gave him a global perspective on business, analysis, and investing. Jeff spent 25 years working as a high-technology executive. He worked for companies like Qualcomm, NXP semiconductors, and Juniper Networks.

He got his undergraduate degree from Purdue University and his master’s degree from the London Business School.

Jeff Brown is also an angel investor focusing on early-stage tech start-ups. He also acts as an active board member and adviser to several companies. Due to his involvement in this world (and previously as an executive), he believes that he has access to information about tech companies that the public never sees and this makes him more trustworthy when it comes to deciphering how the technology sector will work out.

That’s why he writes newsletters like The Bleeding Edge, Early Stage Trader, Exponential Tech Investor, and The Near Future Report.

Jeff Brown’s Confidential Briefing is an event during which the investment guru will reveal how he intends to profit from the Apple Launch event. He says that investors could earn their share of $12.3 trillion if they back the right Apple suppliers.

This has to do with 5G and the fact that the new iPhone has 5G. As mass adoption gets underway, he expects certain companies to benefit more than others and he wants you to get in on them before they potentially skyrocket in value.

If you’ll recall, last year, 5G was all investment gurus wanted to talk about before the cryptocurrency markets went bullish. With Apple’s latest products having 5G capabilities, you can expect it to get back in the conversation and it will be interesting to see how this works out.

Jeff Brown is one of the most experienced tech investment experts in the market. Therefore, his opinions are worth looking into.