In the presentation that advertises it, Jeff Brown introduces us to the concept of Pre-IPO investments that involve SPACs. He tells us that these kinds of investments were not usually accessible to ordinary folk until recently and he will show us how best to navigate them.

In this quick review, I detail what the Blank Check Speculator is and what it offers as well as what SPACs are so that by the end of it you will have a clue as to what Jeff is offering.

What is the Blank Check Speculator?

Blank Check Speculator is a new financial newsletter that is edited by Jeff Brown and published by Brownstone Research.

Jeff decided to launch it because he intends to show people how to invest in Special Purpose Acquisition Companies (SPACs). According to him, they present investors with pre-IPO opportunities that can hand them life-changing gains (more on what they are in a bit).

It bears some similarities to an advisory service that was recently launched by Enrique Abeyta of Empire Financial Research called Empire SPAC Investor. 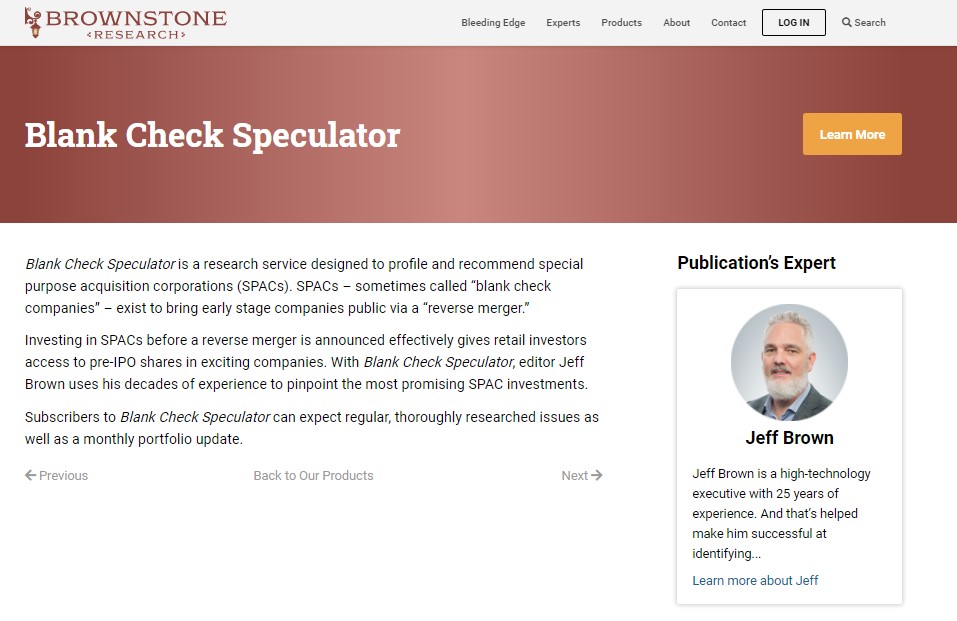 He says that until recently, these investments were out of reach for the retail investor (this quote is taken from the order page):

“Until very recently, this kind of research was not possible. You’d need to be a super-rich AND well-connected investor with contacts in New York and Silicon Valley. The number of people who could take part in pre-IPO deals was tiny.

Now? With Blank Check Speculator, you can get in on these same kinds of deals from the comfort of your own home, using a normal brokerage account.”

So he intends to break down the barriers and give ordinary folk access to information about SPACs that they previously didn’t have through the newsletter.

He invited people to a webinar called the Pre-IPO Code during which he laid out the investment strategy behind the relatively new advisory service.

What are Special Purpose Acquisition Companies?

According to Investopedia, a Special Purpose Acquisition Company, shortened to SPAC, is an entity that is formed to raise capital through an initial public offering. Once it goes public, it then acquires an existing company (or many companies). Typically, a SPAC acquires a promising startup.

Although SPACs have been around for many years, they have grown in popularity in the past two years and have since have attracted some big-name investors and underwriters.

When a SPAC is formed, it does not have a defined target for acquisition and this is why it is sometimes referred to as “Blank Check Company.” This is by design because the founder usually prefers anonymity to avoid having to do extensive exposures as the company goes public.

The money raised in the IPO is placed in a trust and it remains there unless it is being withdrawn to acquire a target company or refund investors their money if it is liquidated. A SPAC typically has two years to acquire a company, failure to which it is liquidated. However, the founder can request investors for an extension – perhaps because the acquisition is taking longer than expected or for any other reason.

When a SPAC goes public, each “unit” comprises a share of the now-public company and a warrant. The shares and warrants (after going public) can even be fractional depending on the terms set in the prospectus. And these units are probably what Jeff was referring to as “Pre-IPO Codes” as he stated:

“The moment you enter a Pre-IPO code and click buy, you’re awarded units — not ordinary shares of stock, I mean units, contractual share of the enterprise you’re buying.”

The warrants usually trade publicly but they bear a special symbol that is typically the ticker symbol of the stock with a “W” attached to it although the naming conventions may differ. For example, if the stock symbol is ABC, the warrant can be ABCW.

I’ve encountered presentations that centered on warrants and a good example is Dave Forest’s presentation about Warren Buffet’s #1 Private Investment.

Jeff presents them as a way to invest in promising new companies because SPACs typically acquire startups.

Jeff Brown is the chief investment analyst for Brownstone Research. He is also the founder of the publishing firm and before that, was on the editorial team at Bonner & Partners.

He spent 25 years as a high technology executive working for big companies like Qualcomm, NXP semiconductors, and Juniper Networks. In addition to helping run big corporations, he has also built organizations from scratch.

He is an angel investor and he mainly focuses on technology startups. By being an angel investor, he claims to have access to information about these companies that the public never sees and that this gives him a leg up on other analysts who specialize in tech startups.

He was born and grew up in America before moving overseas for two decades where he spent most of his professional life. He spent the majority of that time in Tokyo, Japan.

Now that he transitioned into an investment analyst, he writes other newsletters – besides Blank Check Speculator – targeting retail investors. He has premium ones like Exponential Tech investor, Near Future Report, and Early Stage Trader. The free newsletter is called The Bleeding Edge.

What you get when you subscribe to Blank Check Speculator

When you become a member of the Blank Check Speculator, you will receive:

How much do you pay to join Blank Check Speculator?

The standard subscription fee for a one-year membership to the newsletter is $4,000.

However, sometimes you can sign up for it at a lower price if you join through one of those presentations through which Jeff pitches the newsletter.

No, they don’t offer refunds.

Instead, if you cancel your membership, they will allow you to divert your money to any other research service offered by Brownstone Research or its corporate affiliates.

Blank Check Speculator is a new investment research advisory offered by Jeff Brown through Brownstone Research. It is one of the more expensive services he offers (at $4,000 per year, non-refundable).

Before you start investing in SPACs (even not necessarily the ones recommended by Jeff Brown through his newsletter), you should educate yourself about how they work because they are quite nuanced. If you can’t be bothered to read financial documents or follow up on your investments, SPACs are not for you.