If you are familiar with Jeff Brown, you know him as an investment guru who specializes in the tech and biotech industries.

In a recent presentation with the title “Wall Street is Bracing for a New Flood of Biotech Profits,” Jeff talks about a controversial FDA move that could inject over $1.2 trillion into a handful of biotech stocks.

In this review, I walk you through the main talking points of the presentation in case you haven’t watched the hour-long video.

What is Jeff Brown Biotech Profits? (The Pitch)

Jeff Brown Biotech Profits is a presentation that centers on “a controversial FDA move” that could pump $1.2 trillion into several biotech companies. The presentation also promotes the Near Future Report, an investment newsletter that we will be revisiting later in this piece. 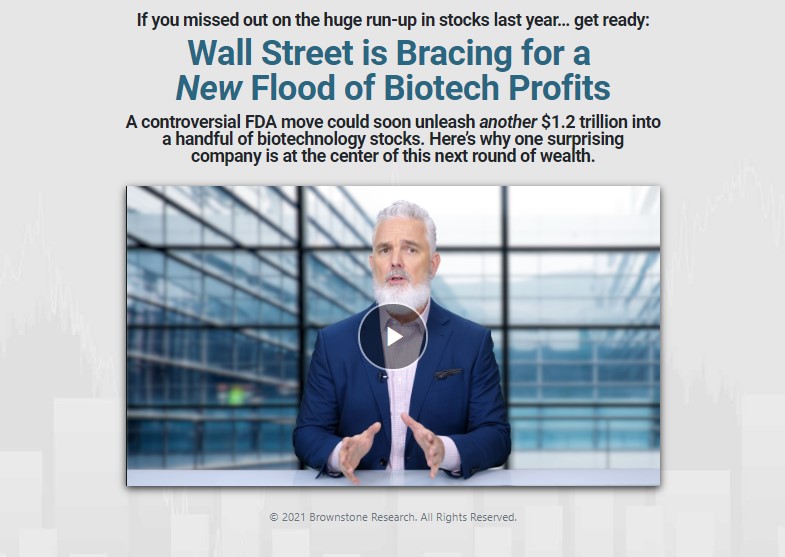 The controversial FDA move Jeff is talking about has nothing to do with COVID-19 and Jeff even says that it will dwarf the $1.25 billion stimulus that the government pumped into the healthcare industry.

He acknowledges that biotech stocks did well in 2020 and that they received a lot of venture capital investments; Investors who went all-in on biotech companies made billions.

However, he says that you will not miss out on the profits entirely if you heed his call and act now. And it all has to do with the FDA move that inspired 9 of the 10 best-selling biotechnology companies of the past ten years.

So, what is this FDA move he keeps referring to?

The FDA Move that Will Generate $1.2 Trillion in Five Years

Jeff says that there is a new type of drugs whose development that the FDA wants to incentivize:

“The answer starts in a tiny sliver of the overall biotechnology market.

If you guessed drugs, you’re right.

But not just any type of drug though.

ONLY an emerging new class of drugs.

They account for less than 8% of all drug sales. Barely a blip on the radar of total healthcare spending. But that’s where this FDA move comes in.

You see, the FDA wants MORE of these special types of drugs.

So they created a special incentive that makes creating these drugs the MOST profitable thing biotechnology companies can do.

Here’s how it works.

If a biotechnology company develops one of these special types of drugs, the FDA can issue it an unusual ‘guarantee’.

What do they guarantee?

Complete exclusivity in the market for that special new drug.

Which means nobody else can sell a drug like it.”

So what Jeff is implying here is that the FDA encourages certain biotech companies to develop this special type of drug by eliminating competition; only allowing them to sell it. He then says that when a company is a beneficiary of this special treatment, its stocks usually soars.

About the special drugs:

Orphan diseases are rare diseases that are caused by genetic disorders. They typically affect a small percentage of the population.

What Jeff is telling us is that a biotech company gets this designation when it develops a therapy for an orphan disease. This means that the FDA guarantees it seven years of exclusivity from the time the drug is introduced to the market.

He says that investing in companies that develop orphan drugs is more lucrative than investing in those that are developing drugs for traditional diseases.

If you are interested in the subject, you can read more about Orphan Drug Designation and the Orphan Drug Act on the official FDA website.

The Biggest Medical Breakthrough of the Century

And this leads us to what Jeff considers to be the biggest medical breakthrough of the century: Genetic Therapy.

This isn’t the first time he is talking about it because he also mentioned this in a presentation about the Tech Melt (Second Wave).

Genetic Therapy is the most effective way to treat orphan diseases. Therefore, if you focus on biotech companies working on it, you may be lucky enough to find a company trying to cure an orphan disease.

Jeff has identified one company that will make a killing from the genetic therapy revolution:

ALL orphan drugs… a tiny sliver of the drug market that’s set to receive another $1.2 trillion over the next five years.

And by building the biggest genetic delivery mechanism manufacturing plant the world has ever seen… they’ve put themselves smack dab in the middle of this coming flood of wealth.”

Unfortunately, those clues were not enough to unveil the name of this biotech stock. If you would like to find out its name and stock symbol, you need to read Jeff’s report about it called The Next King of Biotech: Unlocking the Genetic Therapy Revolution.

He is giving away free copies of the report to new members of the Near Future Report.

Jeff Brown is an investment guru and an angel investor. He is the founder of Brownstone Research.

He got his undergraduate degree in aeronautical and astronautical engineering from Purdue University and a master’s degree in management from London Business School. He has professional certificates from other institutions.

He has spent the majority of his career in tech. He knows a great deal about semiconductors, IT networking and security, technology infrastructure, broadcasting, and much more after working for some of the best tech companies in the world.

He is an angel investor who specializes in tech startups. He attributes his success at spotting great opportunities to having information that the public never sees.

He publishes a popular newsletter called The Bleeding Edge.

In a nutshell, here is what you receive when you sign up for the near future report:

Then there are the free copies of special reports you receive that involve investment opportunities in tech:

You will pay $49 for a one-year subscription if you join through this presentation, a markdown from the normal $199.

The Near Future Report has a 60-day money-back guarantee. All you have to do to cancel your membership is call customer support.

In this presentation, Jeff Brown raises a couple of issues, but the one that stands out concerns an FDA move that could generate $1.2 trillion. We learn that he is talking about an initiative by the FDA to incentivize biotech companies to develop therapies for orphan diseases, which don’t get enough attention or backing.

Out of all the companies developing cures for orphan diseases, he has picked one that has developed six therapies in the past few years. Unfortunately, he didn’t give enough clues for us to uncover it, so you’ll have to sign up for his newsletter, the Near Future Report for $49/yr, or find other means to uncover it.

Overall, the best advice I can give is that you don’t have to chase every new investment opportunity that comes along because you can not only lose sight of other opportunities but may also lose money. And Jeff Brown Biotech Profits is no exception.