Jeff Brown’s latest presentation about the “American Exodus” focuses on a new technological trend. The header, indicative of his approach, reads:

A shocking new trend has ushered in the biggest money migration in US history – putting $40 Trillion at stake.

Its next seismic wave could create a new class of millionaires, unlike anything we’ve seen before… while everyone else is left behind.

In this review, I walk you through the presentation, highlighting the main talking points as well as the investment opportunities Jeff Brown wants you to consider.

What is Jeff Brown’s American Exodus?

Jeff Brown’s American Exodus presentation begins with a preamble about how divided America is. The narrator mentions the widening rift between the Left and Right and the rich and the poor as indicators of this division. 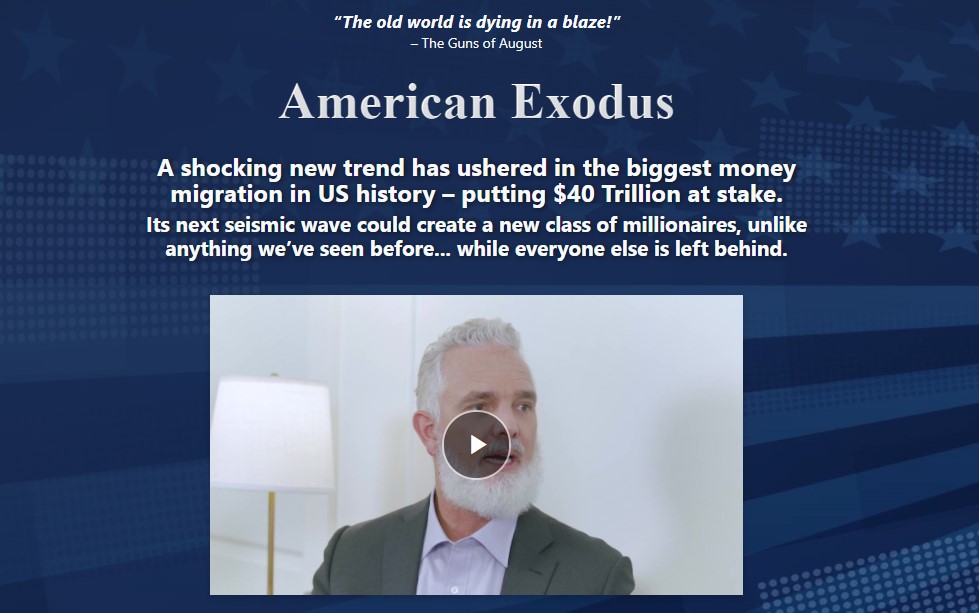 The narrator also points out that 60% of the small businesses that were forced to close due to the pandemic will never come back, while big companies like Amazon, Pfizer, and Walmart thrived, representing a historic wealth transfer. The kind that Robert Kiyosaki talks about in his presentation, America’s Final Wealth Transfer.

He also highlights how certain cities that are riddled with boarded-up shops, homelessness, and crime have seen residents move to other areas that have fewer restrictions.

Jeff calls this the American Exodus.

He talks about how people are moving from certain cities (or states) to others that they consider more desirable.

According to US Post Office data, 8.9 million people have relocated since the beginning of the pandemic.” 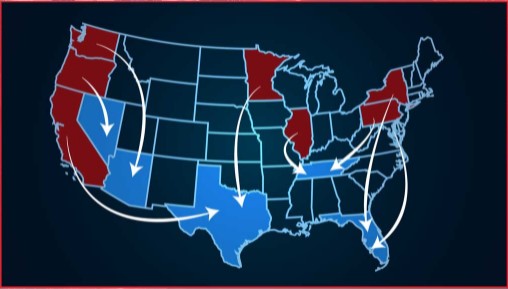 “Over 60k people left NYC in the last year. And that’s just one city, Chris…

For the first time in history, California lost a congressional seat… because more people left the state than moved in.”

In light of all this, Jeff Brown believes that something shocking is about to happen that will hollow out what’s left of once-thriving cities and create the greatest wealth opportunity in human history.

But that’s not all. There is another form of American Exodus:

They’re also moving their money out of the banking system, out of the stock market…”

And stocks that are linked to the technology have already started going up. An example is AVAX, which has gone up over 2,000% in less than one year: 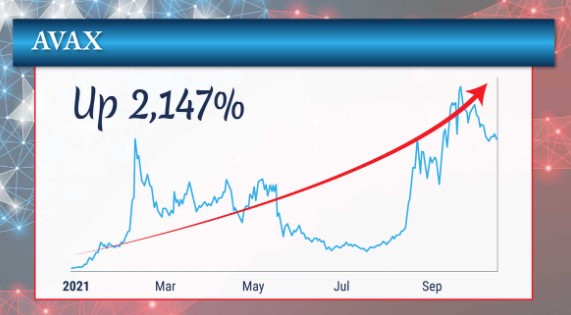 Jeff says that the technology he is referring to is Blockchain technology, the underlying infrastructure of cryptocurrencies, and Decentralized Finance (De-Fi).

The Blockchain has been the subject of presentations like “What Is Digitarium?” by Ian King.

Jeff Brown refers to it as Web 3.0 because he expects it to change everything from banking to real estate, healthcare, entertainment, science, the way we work, and much more.

He says that it is being adopted at a high rate and once it reaches its tipping point (which could be months away), it will create a new class of millionaires.

This is yet another way Jeff quantifies the American Exodus because he says that the world is shifting towards a “pseudonymous, decentralized, censorship-resistant society powered by blockchain technology.”

Jeff says that high net worth investors like Elon Musk, Mark Cuban, Jack Dorsey, and Marc Benioff have all put money into the blockchain.

And it’s not just the rich that are investing; big tech firms, the biggest Wall Street banks, and VC funds are also jumping in.

How to invest in the Blockchain

Jeff says that most people do not understand the importance of the blockchain because the media only focuses on cryptocurrencies.

Jeff Brown considers crypto a tiny aspect of the blockchain and says that you should not feel bad if you have missed out on Bitcoin gains over the past few months.

He, therefore, devised a Four-Step Plan to guide you through this massive money-making opportunity.

Jeff Brown has identified three under-the-radar stocks at the heart of the Blockchain revolution.

Two of them are the pick and shovel companies that Jeff says are essential for blockchain tech to function. He says that he expects them to move up steeply soon because they are vital to most cryptos, including Bitcoin.

As for the third one:

“The third company everyone should own right now is a real game-changer, taking advantage of the new, decentralized internet.

Its Web 3.0 ambitions are flying under the radar for now… that’s why most people don’t realize its value,

It’s also a major disruptor of the global monetary network.”

Jeff has written a report about the three stocks titled Web 3.0 – How to profit from the biggest wealth creation event in history 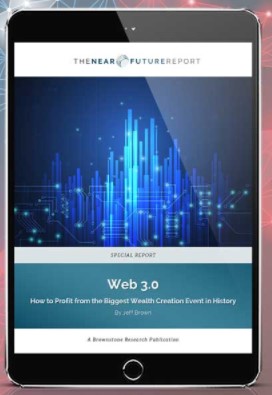 In it, he explains everything he knows about the three companies and also dives into Blockchain technology.

He says that the best way to protect your assets is to allocate a percentage of your investment portfolio to cryptocurrencies.

Jeff Brown believes that Bitcoin, and other major cryptos, are a great store of value. Therefore, he wants you to invest in cryptos.

He has written a report titled How to Make a Tax-Free Fortune With Cryptocurrencies. 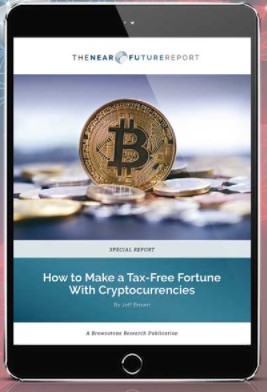 In the report, he explains how you can invest in cryptos without having to create a wallet. He even claims that you don’t even have to use a computer if you don’t want to.

Step 3: Invest in stocks that are at the center of the new “online America”

Jeff Brown notes that the pandemic made people realize that they no longer have to live in cities anymore because their entire lives were forced to shift online during lockdowns. Therefore, they learned that remote work was more viable than ever.

He says that 70% of American workers are willing to take a pay cut to keep working from home as employers start shifting their attitudes towards remote workers. This was the subject of a presentation by Joel Litman titled “Office Doomsday.”

Amid all that, Jeff has identified five companies that are crucial in the new normal. He adds that considering how they are built, it is going to be easy for them to migrate to blockchain networks soon. 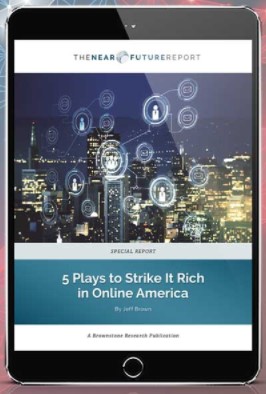 He wrote a report about this that is titled 5 Plays to Strike it Rich in On-Line America.

Step 4: Make a Fortune from a Massive Wealth-Creating Event

Jeff Brown has written two reports: 5 Turbo-Charged Token Companies Set to Explode ASAP and Your 101 Guide to Striking It Rich in the NFT Gold Rush. 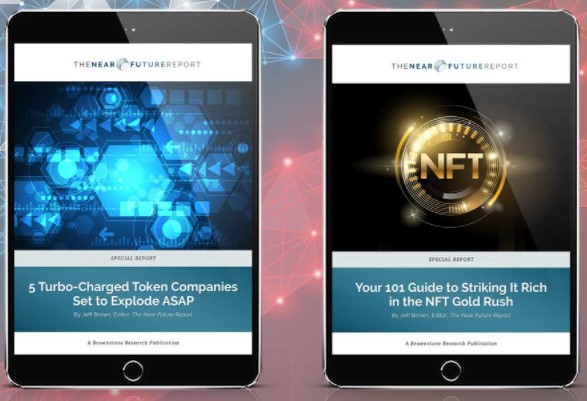 He says that the two reports show you how to make money in one of the most explosive technological trends in the last decade: investing in Non-Fungible Tokens (NFTs).

NFTs are the latest craze to come out of the blockchain revolution and they seem to be catching on, defying critics who thought that they were a fad. In these two reports, Jeff explains how he would recommend you invest in NFTs.

In the first of these two reports, Jeff Brown writes about five tiny token companies that may explode in the coming months. He provides you with the names of each company along with a thorough analysis.

In the second report, he explains how to successfully navigate the world of NFTs, sharing tips on where to buy your NFTs, what type of NFTs to avoid, and how to sell them at a profit.

To get these reports for free, you have to sign up for The Near Future Report.

Jeff is a former high-tech executive who used to work for companies like Juniper Networks, Qualcomm, and NXP Semiconductors.

He is also an angel investor who’s helped fund or advise 222 startups.

Jeff is an alumnus of Yale’s School of Management and Purdue’s famed “School of Astronauts.”

He has been at the forefront of advanced technologies like AI, robotics, biotech, self-driving cars, and 5g. He has written constantly about them.

The Near Future Report is Jeff Brown’s flagship research service. 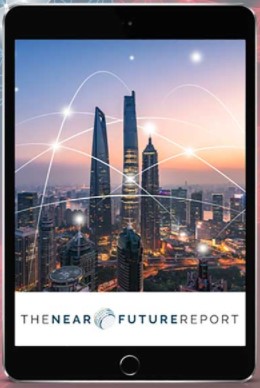 Every month, he shares new insights into groundbreaking trends that can multiply your money before mainstream financial media writes about them.

Here is what you get when you join Jeff Brown’s the Near Future Report:

And, as I mentioned earlier, you also get free copies of the special reports.

The Near Future Report Pricing?

If you sign up for the Near Future Report through the presentation, you don’t have to pay the normal annual fee of $199.

Jeff has slashed the price down to just $49 for the FIRST YEAR.

The annual rate goes up every year after that, as indicated in the fine print:

The annual fee after the first year is $129.

The Near Future Report comes with a 60-day money-back guarantee.

Jeff Brown’s American Exodus presentation is not just about people physically relocating from the big cities (although that has been prevalent over the past few months).

It is also about a shift out of Big Tech and Wall Street and moving into a world powered by the Blockchain. Jeff says that companies involved with the blockchain are skyrocketing and will keep going up as the transition continues.

He sees this as an opportunity to make money; investing in blockchain stocks, cryptocurrencies, NFTs, and companies that thrive post-pandemic.

Jeff has chosen certain companies that he expects to do well in and you have to pay $49 to access their names.

However reassuring Jeff Brown is, do not invest more money in his recommendations than you are willing to lose.