Jeff Brown recently sat down with Chris Hurt to discuss a major trend he calls “The Tech Shock” that he thinks is about to shake up the markets in a significant way.

He says that it will blindside many people but he has found a way that you can not only avoid it but also profit from it.

In this review, we will be taking a closer look at what Jeff is talking about. Unfortunately, I couldn’t unveil any of the companies he is teasing because he doesn’t offer enough clues, but I’ve done an overview of the presentation that sheds light on everything he is talking about.

Jeff Brown says that The Tech Shock is a phenomenon that last happened two decades ago. But he thinks it is about to return and have a bigger impact now than it had back then. 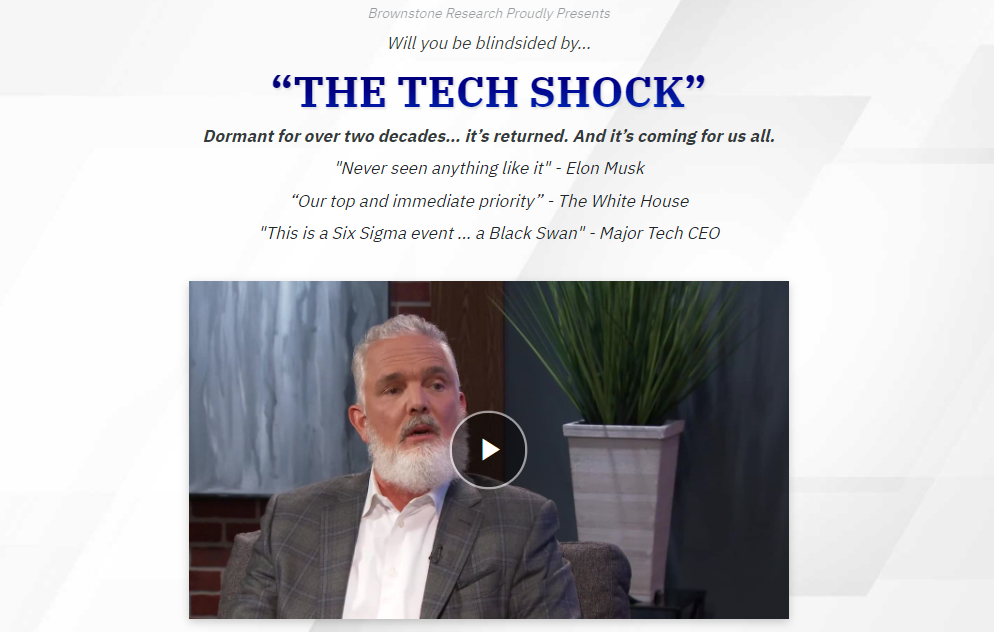 He is referring to a looming shortage of almost everything we buy. Here is what Chris Hurt says as he introduces Jeff:

“Soon, he says, the price you pay for everything from a car… to your next smartphone to your grocery bills will soar.

And we could be thrust into a new kind of crisis with empty shelves as far as the eye can see.”

“Now, he’s come forward to warn of a disturbing new trend… something that he calls a “tech shock.” An event that could derail the post COVID recovery – and send the NASDAQ… and high-flying tech stocks into a tailspin.”

When Jeff is brought on, he says,

“Almost everywhere you look, common, everyday items are being rationed.

Samsung canceled the launch of its new Galaxy Note 21 phone this year… and according to ZDNet, it looks like they may have to scrap next year’s version, as well!”

He also mentions that inflation has already started to bite with the cost of many goods going up. He is not alone when it comes to worrying about inflation because it is already happening and many analysts have taken notice.

So, we know that he is expecting some kind of mass shortage, but what exactly does a “Tech Shock” mean?

According to Jeff, it is an imbalance between supply and demand. He says:

“Now, normally we don’t have to worry about this sort of thing. We live in a world of abundance – where just about anything we want is available. Just a short drive… or phone call or click away.

But for many people – this comfortable arrangement is going to change.

It’s hard to say with 100% certainty what will disappear first.

But at some point soon… just about EVERYTHING you see at the store may be hard to find.”

To elaborate on this, he gives examples with things like air conditioners, dryers, toasters, iPhones, iPads, and food items on shelves being in short supply.

He says that when there are such shortages, it affects the financial markets too. But one shortage, in particular, has him concerned. A shortage of computer chips.

Jeff claims that this is not the first time we are about to see a computer chip shortage. He says that the first time this happened was in 1999, while most of the world was focused on The Dot Com Bubble.

Jeff Brown says that the chip shortage devastated Motorolla leading to its collapse. But at the same time, companies like Qualcomm thrived because they adapted.

He says that we are amid a global computer chip shortage and because technology is so pervasive in our lives, he thinks the tech shock could be bigger than most people imagine.

How Jeff Brown wants to invest in The Tech Shock

Jeff Brown’s advice is for you to start taking positions in the companies that will become “the next generation of ‘Tech Shock’ winners.”

He claims that some companies may go up by over 9,000% in as little as one year and buying them before the massive shortage plays out will earn you a massive return.

As you’d expect, he has identified a group of companies he expects to thrive during the tech shock. He describes one of them in the presentation, saying:

“One of which Forbes calls “The Center of the Global Chip Shortage.” Why? Because it possesses a very special technology—and over 13,000 patents—that holds the key to solving this mess. I believe any company that wants to make bleeding edge computer chips—including the ones in this portfolio—must go through this company first. You’ve probably never even heard its name, but when this is all said and done, in my estimate, this company could go down in history as the one that saved the day…” 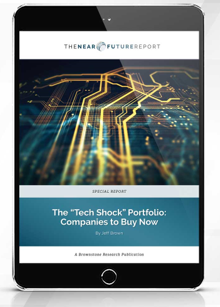 It is one of several companies he wants you to invest in and he has written about them in a report he calls The “Tech Shock” Portfolio: Companies to Buy Now. 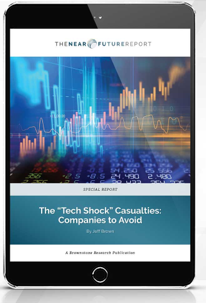 Jeff also says that there are some companies you should stay away from. He has also written a report about them called The “Tech Shock” Casualties: Companies to Avoid. Jeff claims that one of them is considered a safe bet on the market but you should avoid it. 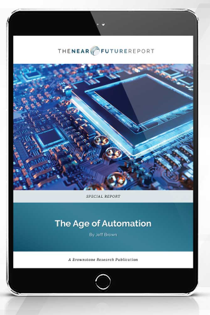 Jeff Brown also sees an opening for investors in the mass automation trend. He says that since many people are opting to not work, companies may be forced to bring in machines to work in their place. He points out that this will particularly affect menial jobs like food servers and baristas because AI is advanced enough to have robots do those jobs. He has identified a series of companies he thinks you should consider backing and written about them in a report called The Age of Automation.

To get those three reports for free, you have to sign up for Jeff Brown’s The Near Future Report, a newsletter he offers that we’ll take a closer look at in a bit.

Currently, he is an active angel investor in early-stage tech startups and has participated in over 200 private deals. He has invested in five billion-dollar “Unicorn” startups to date, one of which is Coinbase.

Jeff Brown is also the founder of a boutique publishing firm called Brownstone Research that he created in 2020. He is the chief investment analyst and he writes a popular e-letter called The Bleeding Edge.

The Near Future Report is Jeff Brown’s flagship financial research service. He created it to share information with his followers that he thinks is not accessible to the average person who follows mainstream news.

He says that his mission in writing the newsletter is to point out major tech trends before they happen so that people who heed his advice can profit from them. He recommends companies that he feels are likely to benefit from those trends.

When you sign up for The Near Future Report, here is what you get from Jeff Brown:

Normally The Near Future Report retails for $199 but if you sign up via the presentation, you only have to pay $49 for the first year.

Note that that fee is just for the first year because your subscription will renew automatically in subsequent years for $129. You can confirm this at the bottom of the order page (it is in the fine print).

The Near Future Report Money Back Guarantee

The Newsletter has a 60-day money-back guarantee.

Jeff Brown is concerned that we are about to experience a massive shortage of computer chips, which will lead to what he calls “A Tech Shock.” He believes that this will spell doom for big companies that fail to adjust and create an opportunity for some small companies to grow.

He has identified a series of companies to invest in and others to avoid and you can read all about them in his special reports. But you have to subscribe to his $49 newsletter to find out what those companies are.

Jeff is one of the most vocal newsletter editors out there and it is no surprise that he wants people to consider signing up for his newsletter. Ultimately, the decision to join his newsletter is yours to make. If you feel like his approach aligns with your investment strategy, then you can try out his service.