Jeff Brown has been sending out emails promoting his upcoming webinar called The Pre-IPO Code.

In the invite, he promises to introduce us to “a new way to invest before IPO day” in what is billed as “the biggest event in Jeff Brown’s 30-year career.”

After receiving the invite and looking into it, I put together this article to outline what you should expect Jeff to discuss during the webinar. Hopefully, this will give you a clear picture of what to expect if you are considering attending it.

What is The Pre IPO Code?

The Pre-IPO Code is an event that will be held on Wednesday, January 13, at 8 PM. It will be Jeff Brown’s first broadcast event in 2021. 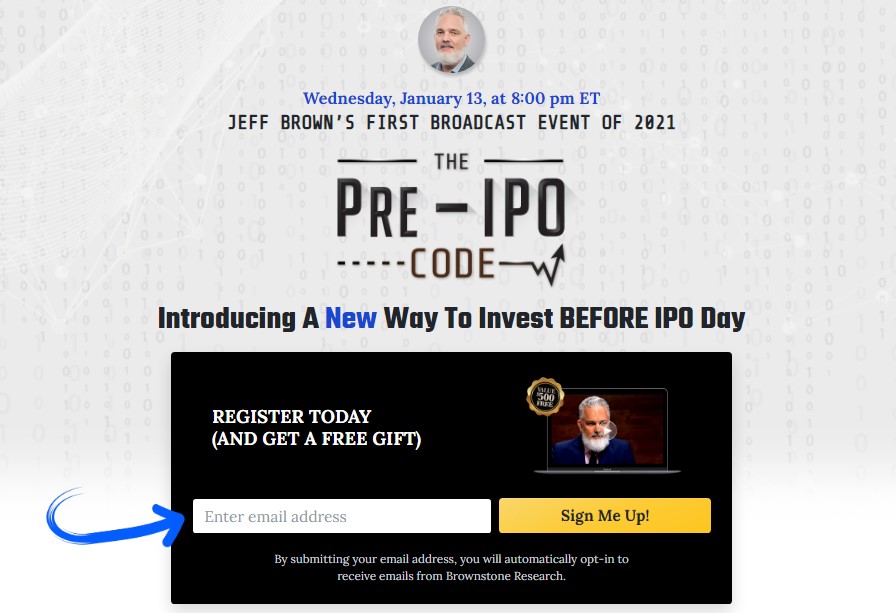 During the event, Jeff will reveal a new way to invest in companies before they go public. It has to do with a code that you type into your brokerage account to get in on the most lucrative private investments.

In the invite, he says that you can get yourself involved irrespective of your net worth or connections. He also says that you don’t have to be an accredited investor to implement it.

He has broken down the process it takes as: logging into your brokerage account, typing in a pre-IPO code, and clicking buy.

When you carry out this process, you then only need to wait for the IPO to “potentially see gains beyond most people’s wildest dreams.” To elaborate on this point, he lists companies like Yahoo, Facebook, Amazon, Groupon, and a few others that enabled investors who invested in them before their IPOs to earn massive returns.

Jeff Brown is an investment analyst who’s also the founder and head editor of Brownstone Research. He edits newsletters like Exponential Tech Investor, Near Future Report, and Early Stage Trader. He also runs a popular e-letter called The Bleeding Edge.

Before Jeff started editing newsletters, he worked in the technology industry for 25 years, most of which he spent as a high-technology executive. He worked for companies like NXP Semiconductors, Juniper Networks, and Qualcomm.

He is also an angel investor who focuses on tech startups. He says that he is adept at it because he has access to information that the majority of investors never get their hands on due to his industry connections.

He was born and educated in America but has spent much of his career overseas in Japan (in those roles I mentioned above).

How to attend The Pre-IPO Code

The webinar is free to attend on the stipulated date even if you have not subscribed to any service offered by Jeff or Brownstone Research.

To sign up for it, you have to provide your email address in the invite, which entitles you to periodic updates about the topic of discussion in the lead up to the event. Jeff also promises to send you a gift.

You will also receive the three-part master class that he will be sending before the event.

As you share your email address, you should bear in mind that doing so means that you are submitting the email address that will then be used to send you promotional emails from brownstone research.

Closing Remarks on The Pre-IPO Code

The Pre-IPO Code by Jeff Brown is an event during which he will reveal a new way to approach IPOs. Although many analysts have done presentations touting various approaches, he claims to have found one that allows you to make money by investing before a company goes public. He says that you don’t need to be an accredited investor, which is usually a requirement for certain forms of private investment.

Having attended other webinars he has hosted, there are a few elements that remain consistent with each presentation that I expect to feature in this one.

First, the event will be recorded so that you don’t have to attend it as it happens. You can then access the recording for free after it happens.

Another thing, he will promote one of his newsletters or introduce a new one. These presentations are usually an avenue for gurus to promote their services. Usually, they tease a stock or some other form of investment and promise to reveal the full details if you sign up for some newsletter.