Brownstone Research recently released a Jeff Brown teaser whose headline was “Why You’ll Never Get Rich on the Tech Boom.”

It concerns three technologies we should be excited about and the companies behind them.

In this article, I walk you through the key points he raised during the presentation.

What is Tech Lag? (The Pitch)

Jeff Brown recently released a new presentation in which he was talking about investing in the stock market, but specifically targeting technology company stocks. 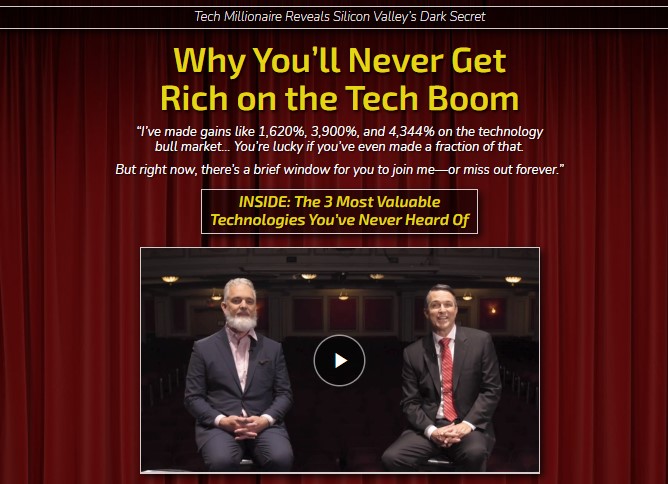 He began by telling us that although technology stocks are generally bullish and have made him a millionaire “many times over,” most people are missing out.

He says that insiders like him are making a ton of money because they are aware of the valuable breakthroughs behind the rising stocks and that such information is not available to the general public. He calls this information gap “Tech Lag.”

He explains that this arrangement can be lucrative because as the big companies profit, the smaller ones profit too but with a higher ceiling because they are scalable.

He took this approach earlier in 2020 when he teased a small company that makes RF filters for 5G devices.

So how does he propose regular investors overcome Tech Lag?

Enlist the help of a tech insider like him.

(Before we get to the three technologies, I should clarify that Jeff did not provide enough clues for me to reveal the companies he was teasing. Nevertheless, I put together the following quick summary for your convenience).

To start us off, he wants to show us three new technologies we’ve likely never heard of that should earn us a fortune in the next stage of the technology bull market.

“These are the technologies of tomorrow…

The companies I believe could book a fortune in the next stage of this technology bull market.

These are the companies tech insiders like me are buying now — while they’re still cheap.”

He says that insiders are already buying a lot of shares to position themselves nicely for when the big gains start rolling in; he doesn’t want us to be left behind.

The first technology is precision medicine.

Jeff says that it could end the pharmaceutical industry because people will no longer need to take multiple drugs. After all, the treatment will be customized to fit an individual’s genetics.

These treatments will fix faulty DNA because their defects are what cause diseases. By correcting the genes, you can remove the threat of disease.

He has identified one company…

This will be the building block for the explosion in precision medicine coming in the very near future.

This company could be in possession of a ‘one-shot-and-done cure.’

Using precision medicine, they can essentially identify the faulty gene and ‘insert’ a new one that works.”

And it has FDA approval…

“And this company already has six treatments approved by the FDA.”

Jeff wrote a report detailing the company and he calls it Precision Insider: The $200 Billion Medical Breakthrough.

Inside the report, he has also made another recommendation. It is a company tackling a global health issue and he expects it to earn positive returns.

The second breakthrough technology is Robotics.

He believes that robotics is capable of helping America reclaim its supply chains and factories from China.

He has identified two companies:

One of them specializes in “machine vision”:

“Just like a human working in a factory, robots need to be trained what to “look” for.

What is the first company?

“This company makes it possible. They make the ‘eyes’ that help robots ‘see.’

And some of the world’s biggest companies — Amazon, Apple, BMW, Unilever, Sanofi — are already using this company’s robotics systems…”

He has written a report about both companies with the heading Robotics Insider: How to Profit From the Return of American Manufacturing.

The third one is 5G, but with a twist.

In addition to extolling the benefits of investing in 5G, he says that it will create a convergence of new technologies that he refers to as “an early version of 6G.”

He doesn’t talk about the companies he wants us to consider saying that we have to read his report called 6G Insider: The Next Trillion-Dollar Network to learn more about them.

Jeff Brown is an investment guru who is a former executive of NXP Semiconductors and Qualcomm. His involvement with those companies over a long period is why he considers himself an insider.

Jeff graduated from Purdue University with a bachelor’s in Aeronautical and Astronautical engineering. He has professional certificates from MIT, Yale, and Stanford and an MBA from London Business School.

In addition to being a former tech executive, he is also an angel investor with stakes in dozens of tech startups.

Jeff Brown publishes his research via a boutique investment firm called Brownstone Research, where he is the lead analyst. In addition to his premium newsletters, he also runs a popular e-letter called The Bleeding Edge.

The Near Future Report is a financial newsletter that you have to join to receive the three reports for free.

Signing up for The Near Future Report feeds into the whole idea of overcoming tech lag because it gives you access to information regarding all the breakthroughs you ought to be considering for investment.

In addition to the reports, when you become a member of The Near Future Report, you get monthly issues of the newsletter, each with new ways of making money in the tech space.

If you sign up for the newsletter via the presentation, you will pay $49 for a one-year subscription.

You can cancel your subscription and ask for a full refund within 60 days of becoming a member.

The premise of the presentation was to get people to sign up for Jeff Brown’s newsletter, The Near Future Report.

But at the same time, he tells us that the stock market is rigged against regular investors when it comes to investing in technology companies because those who know the goings-on in Silicon Valley have the upper hand. He calls this information gap, “tech lag.”

He says that the people who make money are those who invest at the ground floor i.e. when a company working on a breakthrough technology is still small.

He promises to help retail investors out by sharing the information they need to invest in promising tech startups if they sign up for his newsletter.

If you are to follow his advice, I should mention that investing in startups exposes you to considerable risk because they are unproven and, statistically, chances of failing are higher than succeeding.