It concerns what he considers “the breakthrough of the century” and from the header, you can tell that it has to do with developing a weapon to fight China – he even throws in a “modern-day Manhattan Project” inferring that it is a big deal.

I sat through the presentation and came away with the main points he was raising, which I am about to share with you today in this article. Keep reading to uncover the message behind the presentation.

What is Jeff Brown’s Project Xi?

Project Xi is the title of a presentation by Jeff Brown whereby he claims to have uncovered “the breakthrough of the century.” 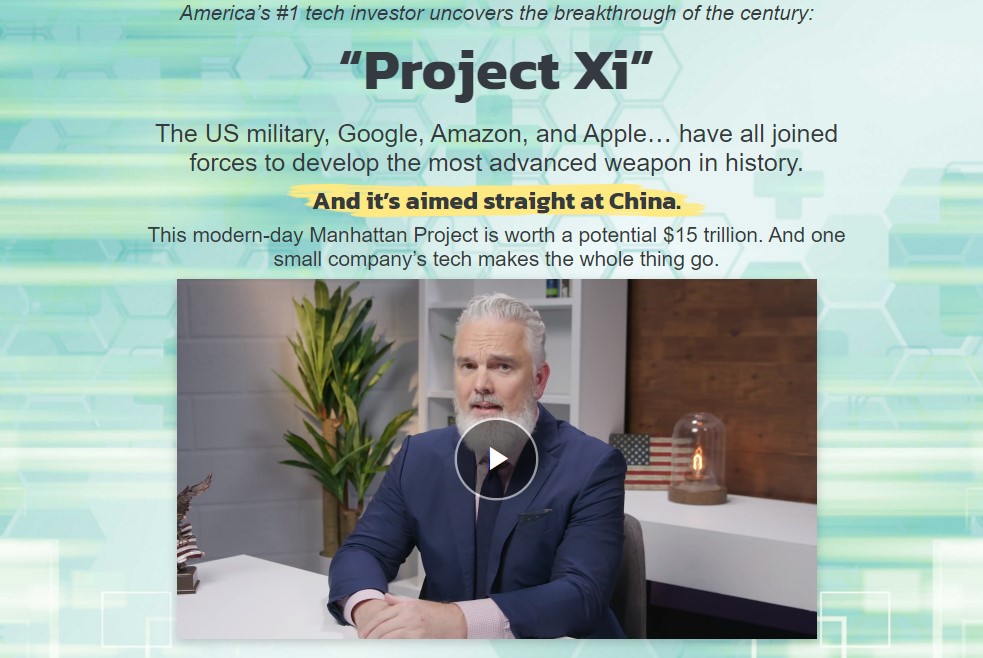 According to Jeff, the US military is working closely with big tech companies like Apple, Amazon, and Google to create an advanced weapon that will be used to take down China.

Although he goes on to call it the “modern-day Manhattan Project” for reasons I will clarify in a bit, he says that it has nothing to do with warfare. Here is how he puts it:

“This operation isn’t about building a nuclear bomb… a new supersonic aircraft… or any kind of deadly weapon. What’s under cover in the Oak Ridge National Lab is way more destructive. It’s an economic weapon…”

All told, he estimates that the project will create an industry that could be worth $15 trillion.

What is “The Modern-Day Manhattan Project?”

And if you know your history, you will know that that was where the nuclear bombs used during World War 2 were created.

Jeff, therefore, decided to use that name to infer that the project being conceived there will be used to counter a major threat… posed by China.

What does China have to do with this?

Jeff Brown correctly points out that China has become the manufacturing epicenter of the world for the past few decades.

It is no secret that many American factories outsource some of their processes there because it is cheaper. For various reasons, it is more economical for companies to manufacture their products there – ranging from simple things like clothes to highly sophisticated machinery.

Jeff concludes that this puts China at a strategic advantage, which is significant because China and the US are rivals; some government officials even believe that the two countries are in a Cold War of sorts (remember the Trade War?)

Therefore, “Project Xi” is a collaborative effort by the government and the private sector to wrestle control from China and make America self-reliant in the manufacturing sense. Here is how he says it:

“The US Government and America’s top tech companies have joined forces on a ‘secret mission’. This initiative is on a scale not seen since the Manhattan Project. Amazon… Apple… Google… Tesla… Microsoft… IBM… the Department of Defense… They’re all involved in this groundbreaking new technology. Worth a potential $15 trillion… This is the breakthrough that will put America back in the driver’s seat. Once again, we’ll be the most technologically advanced nation in the world — a step ahead of the Chinese.”

So, what is this “groundbreaking new technology” he keeps teasing?

What does Jeff refer to as “The Breakthrough of the Century?”

Jeff goes on about what he considers a breakthrough technology that will put America back on the map as a manufacturing powerhouse.

He reveals that he is talking about robotics.

Before you get all excited about it, I should clarify that “industrial robots” are used extensively in American industries and have been for a while now. They are a crucial part of many manufacturing processes.

But Jeff says that he is talking about an entirely different kind of robot:

“What I’m talking about here is a completely new category… These are machines that can learn by themselves, from demonstration. Just like we humans do… Machines that can spot defective parts faster, with 100% accuracy. And reduce factory downtime dramatically.”

This means that they use some form of AI and machine learning to work more effectively. They are essentially “smart machines,” as he calls them.

Two companies you should invest in

All that build-up leads to two companies he wants his readers to invest in.

Let’s start with a small company that will manufacture an important component of those smart robots. The component in question is “a tiny supercomputer” that can perform 200,000 trillion calculations per second.

He says that it is already being used by some of the biggest tech companies:

“Google, Amazon, and Microsoft have already upgraded their cloud platforms. They now all run on this ground-breaking hardware…

Mercedes-Benz announced that every single car in their new line will have this hardware at their core.

And the US Department of Energy is using it in their COVID-19 research.”

He recommended the company to his readers in 2016 and it gained over 1,048% in the months that followed.

He claims that once the robots hit the market, its stock will rise again making it imperative for you to invest in it now before it starts soaring.

Unfortunately, I couldn’t find out the name of the small company because those clues are rather vague.

Moving on to the second company, he says that it makes the sensors that the smart robots will use to collect information from their environment. Here are the hints dropped in the presentation:

This small company is the leader in this ‘machine vision’ field.

Each year, they invest around 15% of their entire revenue into R&D…

And it’s already paying off:

Their technology is de-facto standard…

Apple is one of their biggest customers.

Again, I couldn’t make out what the name of the company is because those clues are also vague.

Jeff Brown has written about both companies in a report titled “Project Xi: Two Explosive Stocks Behind the $15 Trillion Tech Revolution.”

Jeff Brown is a tech investment guru and the founder of Brownstone Research. It is a publisher of investment newsletters and through it, he edits The Near Future Report, Exponential Tech Investor, and The Early Stage Trader.

He also has a popular free newsletter called The Bleeding Edge through which he alerts readers to the latest opportunities involving new technologies before they go mainstream.

Before he got into newsletter writing, he was working for major tech companies like Juniper Networks, NXP Semiconductors, and Qualcomm as a high-tech executive.

He is also an angel investor and he advises Silicon Valley startups across multiple types of tech.

He, therefore, learns about new advances in the field before they go into the public domain, which allows him to alert his readers to new disruptor companies before they become major successes – some fail to take off, inevitably.

What do you get for subscribing to The Near Future Report?

To receive a copy of the report for free, you have to subscribe to The Near Future Report – the point of the presentation was to pitch the newsletter.

In addition to that report about “Project Xi,” Jeff also promises two extra reports for free:

In addition to the reports, you also receive email alerts with new buy and sell recommendations, access to the model portfolio, and the full archive of all special reports.

You can sign up for the Near Future Report for one year for $49, down from the usual $199.

The Near Future Report comes with a 60-day money-back guarantee.

Jeff Brown’s Project Xi presentation was meant to advertise his advisory service, The Near Future Report. It is one of the investment newsletters he publishes at Brownstone Research.

Now, unlike the other newsletters, with this one, he focuses on opportunities that are likely to earn returns quickly. He says:

“I’m not going to lecture you on technologies that are years away.

I’ll show you how to make money on tech stocks right now.

In The Near Future Report, I’ll take you behind the curtain and show you technologies on the verge of immediate adoption, like robotics and 5G.”

If you are willing to try it to receive investment advice on short term opportunities in the tech sector, ensure that you don’t invest money that you are not comfortable losing – startup investing is full of risk and the chances of a small company failing are greater than its chances of succeeding.