What is MTA Technology?

He says that we are on the cusp of the biggest technology race in history that involves Six different TRILLION-dollar companies, 4-BILLIONAIRES, and The U.S. Gov’t with each trying to dominate a new technology he calls M.T.A.

Let me walk you through Jeff Brown’s pitch to learn more about this new technology he is raving about and the investment opportunities that he teases.

What is Jeff Brown MTA Technology?

Jeff Brown is no stranger to making bold proclamations about the technology sector. Often, he tells us that he has found the next big technological trend and unveils the investments you should take seriously if you want to make money.

I’ve encountered his past pitches like SCG Technology, American Exodus, and The Crypto Effect. 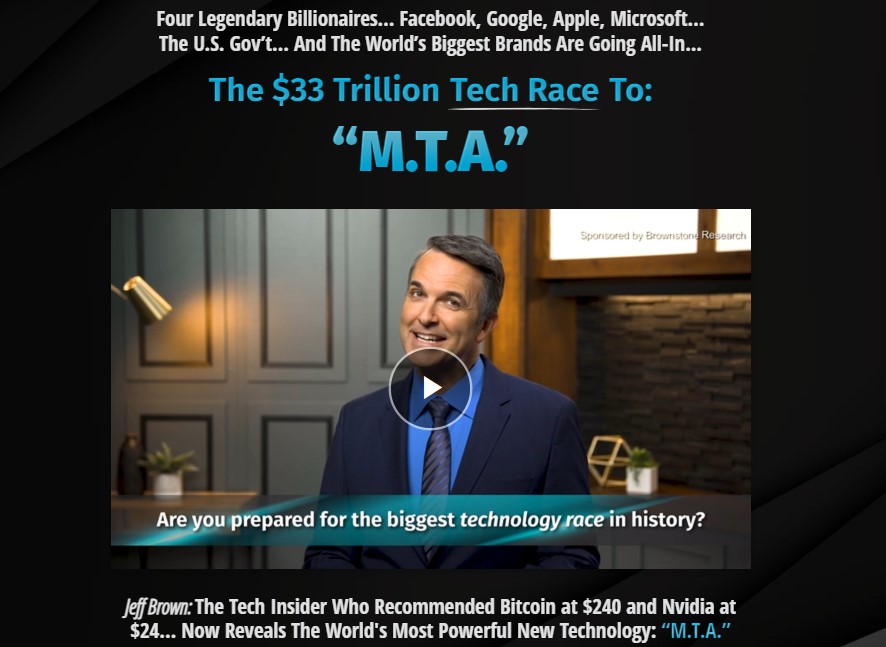 In this presentation, he talks about a big technology he thinks we should be paying attention to that is creating “America’s Final Tech Wave.” 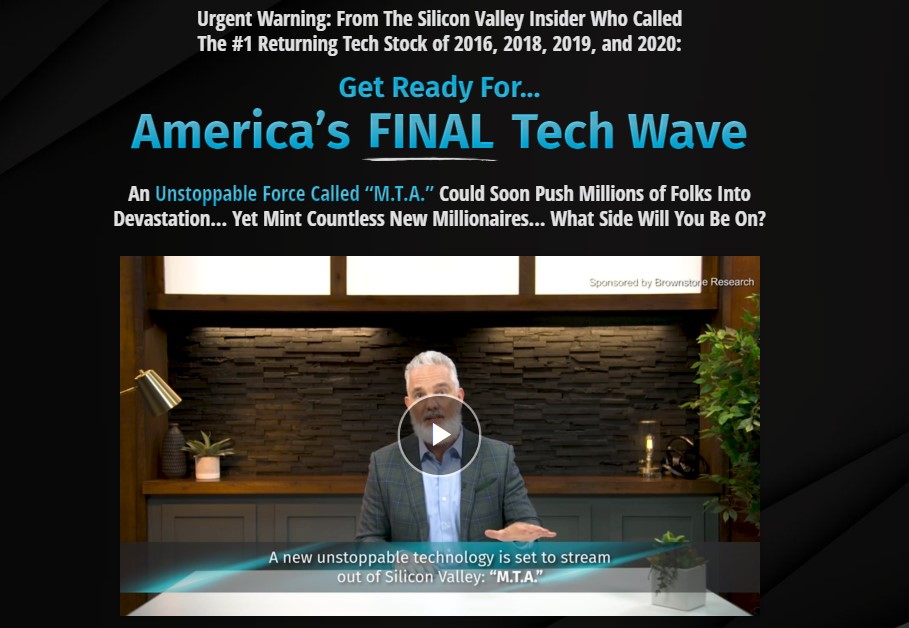 Jeff Brown claims that experts expect this new unstoppable technology to become the biggest global economy, a $141 trillion-dollar shift (without involving blockchain or crypto), save tens of millions of lives all around the world as it disrupts the $11 trillion healthcare system, and ignite an economic tsunami of thousands of new businesses.

He adds that it could become bigger than cryptocurrency, blockchain, 5G, driverless vehicles, space, robotics, quantum computing, and AI.

He points out that the technology industry is excited about it:

Not to mention 5 more trillion-dollar tech leaders and 4 billionaires are racing to dominate M.T.A.

Google, Apple, Microsoft, Tesla, Amazon, Disney, Blackrock, Netflix and virtually every industry titan around the globe are rushing to bring M.T.A. into the mainstream.”

And of course, a giant wave of new millionaires will be created for those who get in early.

Jeff says that it all starts with Facebook; he claims that by dominating this tech, Mark Zuckerberg could become the most powerful man because he (Zuckerberg) has shifted his trillion-dollar empire to focus on M.T.A.

That is the strongest hint that Jeff Brown is talking about The Metaverse.

The Metaverse is a creation of digital realities where people work, play, and socialize.”

The Metaverse is a concept that Facebook has fully embraced, seeing it as the future of how people interact. Mark Zuckerberg even renamed Facebook Meta (FB).

Jeff says that other big tech companies are following Facebook’s example of investing heavily in this new trend.

Jeff Brown insists that the Metaverse will disrupt our entire financial system and alter our day-to-day lives. And as it does that, a tsunami of new millionaires will be minted off of investors who get in on this new technology in the coming months.

He recommends that you invest in Meta (formerly Facebook):

“So today, as promised, I want to give you a 100% FREE stock pick to immediately get invested into the technology of the century, The Metaverse.

And if you’re wondering why this sounds so familiar, it’s because it is.

Yes, I’m recommending purchasing shares of the company formerly known as Facebook – now, with their focus solely on shifting their trillion-dollar force into becoming the world’s leader in Metaverse technologies…”

Having said that, his number one investment recommendation is another company that all major tech companies will have to go through to fulfill their company vision of the metaverse.

He has written about it in a special report.

In this report, Jeff reveals the name and ticker of this stock that he thinks is the #1 way to profit from the Metaverse in the shortest amount of time. 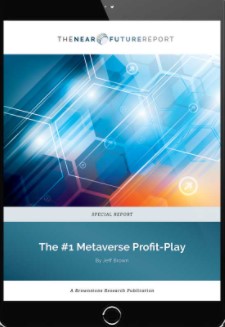 He also lists the hedge funds and smart money that are investing in the technology.

You can get the special report for FREE if you sign up for The Near Future Report.

Jeff Brown is the founder of Brownstone Research, a boutique investment research company under Legacy Research that is owned by Stansberry Research.

Jeff Brown has been a Silicon Valley insider for over 30 years. He is a former high-level executive at Qualcomm and a Vice President of NXP Semiconductors, Japan. 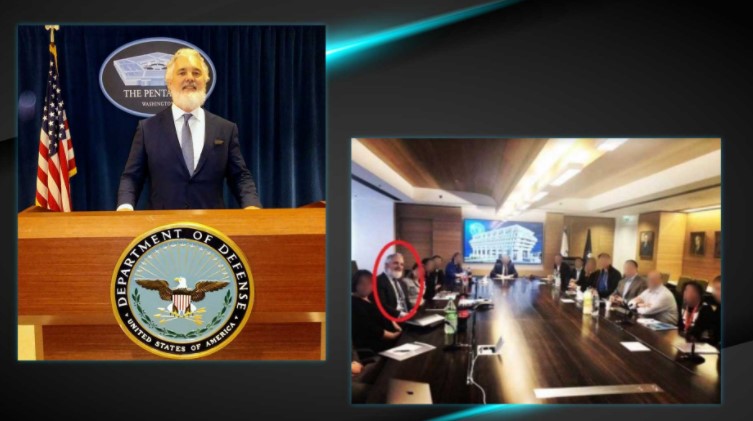 Owing to his expertise in innovative emerging technologies, he has routinely met with the offices of high-ranking policymakers in the National Institute of Standards and Technology, Defense Intelligence Agency, Department of Commerce, and even the Pentagon.

Jeff Brown is also an angel investor who’s been a part of over 250 deals. He claims to have pocketed gains as high as 4,300% off of these investments.

Jeff got his bachelor’s degree in aeronautical and astronautical engineering from Purdue’s “School of Astronauts” certificates. He also has professional certificates from Stanford, UC Berkeley, MIT, and Yale and an MBA from the London Business School.

Over the years he’s been actively writing about the tech industry predicting where investors can make the biggest gains. For example, he claims to have published a write-up to buy bitcoin in 2015 when it was just $240.

Jeff Brown’s The Near Future Report is a financial newsletter I have written about many times on this blog. I’ve even done a comprehensive review of it (follow the link). 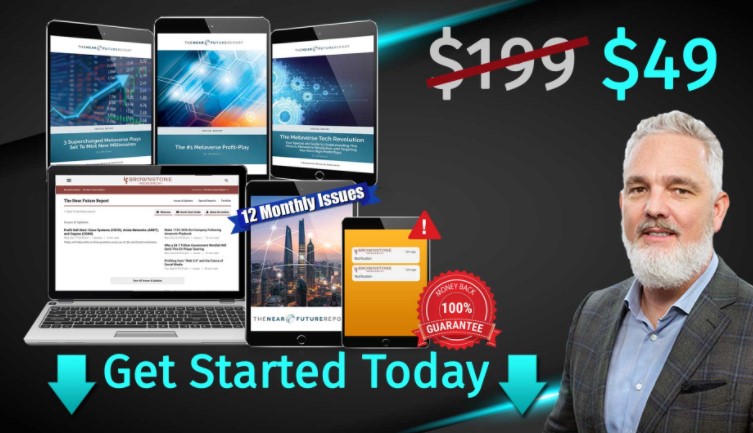 Jeff describes the Near Future Report as a “secret financial weapon for those looking to get an inside edge to cutting tech advancements BEFORE they’re released into the mainstream.”

He says that he writes about top-tier investments that have not yet been talked about on mainstream financial news media. He has been in the tech space as a high-level executive and private tech investor for over 30-years.

When you subscribe to The Near Future Report, you receive:

Besides those benefits, you also receive bonus special reports like: 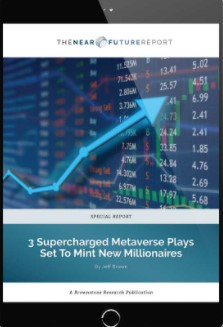 In this special report, Jeff reveals the names and ticker symbols of three companies involved in the Metaverse that he wants you to consider. He also gives his reasons as to how these companies are disrupting certain sectors.

The Metaverse Tech Revolution: Your Special 101 Guide to Understanding This Historic Metaverse Revolution, and Targeting Your Own High-Profit Plays

Jeff Brown refers to it as “your 101-guide to navigating the world of the Metaverse.” 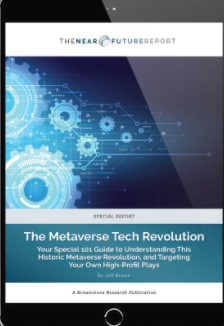 He reveals how he thinks the Metaverse will disrupt every sector and become the next version of the internet He also writes about how you can target your potential high-profit plays in the market by investing in the companies that are heavily involved.

Jeff claims that there’s a lot to unpack to completely understand the Metaverse and this is his step-by-step guide to navigating it.

This report is about a tech company that Jeff alleges could become the #1 global supplier of physical equipment needed to bring The Metaverse to market. 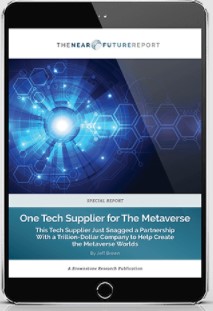 It has partnered with a trillion-dollar firm to exclusively use its products and services and could potentially explode from new partnerships as The Metaverse surges into global adoption.

The Near Future Report Pricing?

If you subscribe to The Near Future Report through the presentation, you will only have to pay $49.

Note that the subscription will be renewed automatically every year at a fee of $129 as stated on the order page:

“Upon renewal of your The Near Future Report subscription, Brownstone Research will charge $129 (plus applicable taxes) to the credit card or other means of payment on file.”

This shows why it is important to read the fine print before you get involved in such endeavors.

The Near Future Report has a money-back guarantee that runs for 60 days. 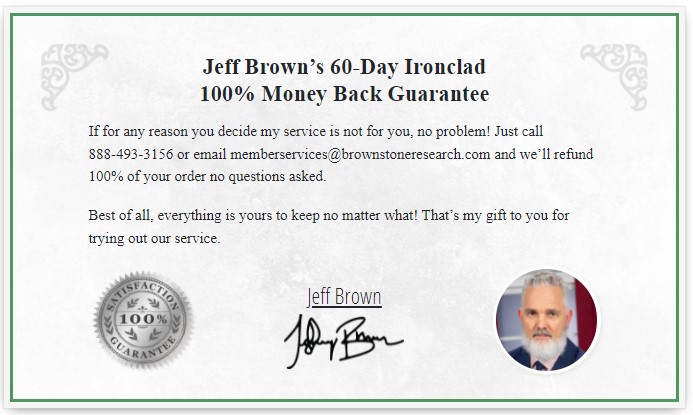 However, I think it is wise to read the terms and conditions page to confirm that they offer cash refunds. You will also find out about their terms, which may have changed by the time you read this.

Jeff Brown’s new presentation centers on “M.T.A.”, which we discover is just a term he coined to refer to The Metaverse.

The metaverse is a relatively new concept that is expected to become the next frontier of human interaction. It will be a step beyond social media and smartphones, which have dominated in the past ten years.

It is expected to combine physical and digital realities, which Jeff Brown thinks will transform every major sector and industry around the world, almost overnight.

As for investing in the trend, he makes the most obvious recommendation: investing in Facebook (now Meta). But on top of that, he also has his eye on a host of companies that are also involved in the trend.

As I write this, it is difficult to tell whether those companies will do well because the metaverse is still a fledgling concept. However, it is exciting and Jeff may be on to something. If you are looking to invest in his recommendation, do not invest more than you are willing to lose.