Jeff Brown, who is best known for talking about investment opportunities in the technology sector, has recently been giving his opinions on the world of cryptocurrencies. His newest pitch called Click for Crypto centers on this.

The event is his first-ever cryptocurrency stream, and he intends to share what he regards as “the largest Free Crypto ‘Giveaway’ in history.”

In this article, I give you an overview of what to expect from him at the event.

We are not used to seeing Jeff Brown talk about cryptocurrencies and blockchain investments because he mostly talks about tech startups, biotech companies, and private investments. 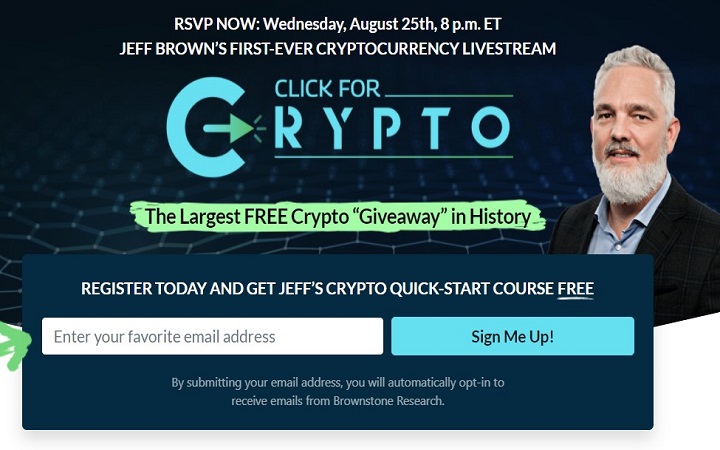 We are more accustomed to guys like Teeka Tiwari and Tom Gentile sharing their thoughts with us on what they think are the best cryptocurrencies or blockchain stocks to invest in.

But for a few weeks now, Jeff Brown has been writing about cryptocurrencies through his free newsletter, Bleeding Edge. He has also written a couple of articles on cryptos on Brownstoneresearch.com.

He hasn’t been recommending crypto investments as those other guys have; instead, he has been writing generally about trends in the cryptocurrency space.

But now, it appears like he wants to go all-in on them if this Click for Crypto event is anything to go by.

Jeff Brown says that he wants you to get in on the “next Ethereum.”

In the invitation to the event, he says,

“I’m holding my first-ever crypto Livestream… to reveal what may be the most urgent opportunity of my career.

After almost a decade, Ethereum’s co-creator is finally launching a new crypto project. That’s correct. The genius behind Ethereum’s 1,000,000% rise is back.

And this time, you can get in early.”

Jeff Brown reveals that one of Ethereum’s co-founders wants to launch a bold new project. He says that the news (concerning this project) broke at a special event that was recently held with 75 industry leaders in attendance.

What else does Jeff reveal about the project?

“To spearhead the launch, Ethereum’s co-creator is undertaking a bold initiative. He’s set aside up to $2.9 billion worth of his project’s new coins as a reward for early backers…

And he’s giving them away, in the words of Bloomberg, ‘free.’

Coinbase, America’s largest crypto exchange, has confirmed rewards will be distributed to some early backers in ‘approximately two weeks.’”

Jeff adds that to be an early backer, you need to be an accredited investor, which he thinks effectively locks out a large group of people. If you are eligible, he says that getting started is as straightforward as clicking a few buttons on your laptop or phone.

So, the way he frames it, he says that it is an opportunity to grab a share of the $2.9 billion in free crypto that is reserved for early backers.

Although I am not sure of this, I think what Jeff Brown is saying has something to do with Decentralized Finance (DeFi) because Ethereum is the most popular platform for people to run a decentralized financial system that is devoid of organizations like Central Banks and government agencies.

I won’t get into the specifics about this but one of the features of DeFi is Decentralized Exchanges, which allow people to trade tokens much like people trade shares on a stock exchange like the NYSE but without involving a central authority.

In this case, people trade tokens amongst themselves without involving any middlemen.

I think the co-founder he is talking about will be issuing “shares” to new backers on the DeFi-based system.

Jeff Brown is an American investment analyst and angel investor. He is the founder of Brownstone Research, an independent financial publishing firm that markets newsletters (mostly edited by Jeff Brown himself) to retail investors.

Jeff’s background is in the technology sector. He spent 25 years working as a high technology executive for some of the most recognizable technology companies in the world. For example, he worked for NXP Semiconductors, Juniper Networks, and Qualcomm.

As I mentioned, he is also an angel investor and he has been focusing on tech and biotech startups. He claims that his constant involvement with industry insiders gives him an advantage because he has access to information the public never sees. After all, he accesses the information before the mass market becomes aware of it.

Jeff Brown has also built organizations from the ground up and run divisions of companies making hundreds of millions in revenue.

Although he was born and grew up in America, he spent two decades living and working abroad, with much of that time spent in Japan. He claims that this gives him a unique global perspective on business, investing, and analysis.

Jeff Brown has an undergraduate degree in aeronautical and astronautical engineering from Purdue University. He also has a Master’s in management from the London Business School.

Jeff Brown says that he knows about the new Ethereum-related project because he is a tech VC who operates “deep on the inside of this [crypto] market.” He wants you to follow his advice because four of his investments have grown to become billion-dollar companies. Moreover, he says that he is an early investor in Coinbase, which is one of the largest cryptocurrency exchanges in the world.

Although it is not always a good idea to follow someone’s advice simply because they were right about the market in the past (the markets are hard to predict), it is better than going it alone if you are a total beginner. Jeff Brown probably knows the market better than most people but you should only follow his advice of your own accord.