Jeff Brown of Brownstone Research released a pitch titled “The $30 Trillion Megatrend of the Decade.”

“Warren Buffett, Jeff Bezos, and Elon Musk are all investing in what many are calling the biggest trend of the 2020s. And now, the man regarded by some as America’s #1 tech expert reveals how anyone who joins these billionaires could make a fortune in the coming months and years.”

After sitting through the presentation, I wrote this article to walk you through the main talking points as I reveal the name of the company he teases.

What is The $30 Trillion Megatrend of The Decade? (The Pitch)

Jeff Brown believes that he has unearthed the $30 Trillion Megatrend of The Decade that billionaires like Elon Musk, Jeff Bezos, and Warren Buffett are all in on. Therefore, when he sat for the interview with the host, Chris Hurt, it was the main topic of discussion, besides promoting his newsletter – the Near Future Report – but we will get to that in a bit. 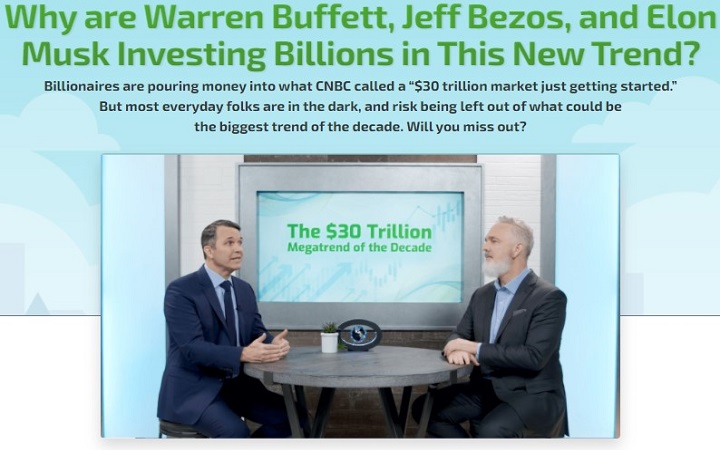 Jeff had a device that had a piece of tech that he said could be part of a $30 trillion trend that may dominate the decade, eclipsing trends like 5G, AI, blockchain, and just about any other trend that people have been excited about.

Before we get to the tech in the device, what trend is he talking about?

It is something he calls ESG Investing. The acronym ESG stands for Environmental, Social, and Governance.

He clarifies that it has nothing to do with renewable energy, which you’d expect to be what he was referring to…

“I mean, of course renewable energy is part of this ESG trend.

But that’s not really what excites me.

And the technology inside my pocket has nothing to do with that.

Instead, I’m focusing on the marriage between two new exciting technologies.”

The two technologies he is talking about are Electric Vehicles (EV) and Artificial Intelligence (AI). He says that electric cars will reach mass adoption, not because people will become environmentalists, but because they will be even cheaper than gas-powered cars.

When electric cars catch on, he expects the companies involved in their production to rise in value across the board. He says…

“We’re already seeing some massive gains in companies involved in this booming industry of electric vehicles.

Companies that make the batteries…

Companies that mine lithium…

Or those working on charging stations….

You name it… They’re all exploding upwards.”

As he explains why AI is relevant to the conversation, he refers to how Tesla isn’t just a car manufacturer and why the piece of tech in his pocket relates to it.

“Every other carmaker buys or builds an engine and a chassis…

Then they fill in the rest of the details…

And only then, they write software to assist in controlling the car.

Tesla does the opposite.

It has designed its software first…

Then it built a car around it.

And he concludes that Tesla is leading the way in the next stage of transit, fully Autonomous Vehicles, the marriage between an electric car and artificial intelligence.

Tesla is already making self-driving cars and Jeff runs a demo where he is in a Tesla cruising with the self-driving feature. Note that the self-driving capabilities currently in the market are not at the level where you can get off the wheel and let it steer itself without monitoring it. However, companies like Tesla and others are working hard to make it a reality.

Jeff’s Pick for The $30 Trillion Megatrend of The Decade

And this leads us to the company he wants us to consider investing in.

The piece of tech he has in his pocket is a camera that is mounted on the windshield of the car to provide visibility in front of the car. We learn that the camera in his hand is installed on Tesla cars, which means the company is a Tesla supplier.

Now, after going through the part where he gives us his clues, I realized that the description he gives is exactly what he gave in another presentation he did a few weeks ago called Elon Musk’s Next Big Project (SAV). In that one, he insisted on positioning Tesla as the leader in the robotaxi revolution.

Here are other clues besides the fact that it makes sensors in the front-facing cameras of Teslas….

“While shares of Tesla are trading above $700…

The company behind this tech is trading for a price that’s 95% cheaper.

So that means there’s a lot of upside potential.”

After calculating that, it puts the price of each share at $35.

More from the pitch:

“Fortune magazine even named it one of the fastest growing companies in America.

You see aside from this sensor that’s used in Tesla…

This company makes more than 10,000 other car products, mainly semiconductors…

Including power semiconductors that help bring the cost of batteries down.”

And it also has some high-profile clients you may be familiar with:

So as all the automakers continue to shift to EV, this company stands to make a fortune.”

Jeff wrote a report with the title How to Make a Fortune From Tesla’s Secret Supplier in which he reveals its name and ticker symbol. To read the report, you have to sign up for his advisory service, The Near Future Report.

But rather than sign up for a newsletter just to reveal the name of one company, I did the research and I think I know its name.

I think he is talking about ON Semiconductor Corp. (ON). It is a semiconductor supplier that was formerly in the Fortune 500 before it dropped into the Fortune 1000. It manufactures a wide range of products ranging from consumer, industrial, power and signal management tools, just to mention a few. Its share price has been hovering around the 35-40 dollar mark since the beginning of 2021.

I couldn’t verify whether ON supplies Tesla because that information, as he says, is confidential. However, it is as close to Jeff’s description as it can get.

Jeff Brown is an investment analyst and angel investor. He is the founder of Brownstone Research and is the main editor in charge of advisory services like The Bleeding Edge.

He has degrees and certificates from Purdue University, UC Berkeley School of Law, MIT, the London Business School, Yale School of Management, and Stanford.

As for his career, he was an executive at Qualcomm and while he was in Asia, he was a Vice President of NXP Semiconductors (Japan).

As an angel investor, he has made dozens of deals involving tech startups earning gains as high as 4,300%.

As a tech expert, he has been consulted by policymakers, members of the National Institute of Standards and Technology, senior members of the Department of Commerce, and the Defense Intelligence Agency. He is an active member of the Chamber of Digital Commerce.

The Near Future Report is one of the premium investment advisory services that Jeff publishes via Brownstone Research. The newsletter focuses on technological advancements that are taking off fast. It focuses on big-picture trends like machine learning and AI, gene editing, cloud computing, and 5G.

If you sign up for it, here is what you get as a member:

Closing Remarks on $30 Trillion Megatrend of The Decade

Self-driving electric cars are what Jeff believes will constitute a $30 trillion megatrend of the decade because they will be at the intersection of electric cars and autonomous driving (AI).

Throughout the presentation, Jeff Brown tells us that rich people and institutions are investing in such technologies and that we should emulate them because “they like making money.” While that sounds sensible on paper, you should not follow anyone’s advice before you objectively examine its merits to ensure that it would work for you.