Jason Williams, who works for Angel Publishing, released a presentation with a header that reads:

Here, he is referring to an invention in battery technology that he expects to become huge in the coming years.

I sat through the presentation and put together this article where I give you an overview of what Jason was talking about.

Angel Publishing, a financial publishing company, has been pushing Jason’s presentation and it is about a new technology that Jason is fascinated by. 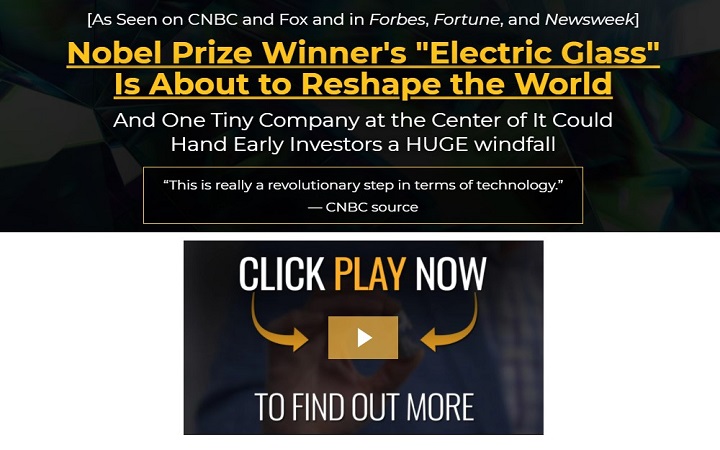 Jason Williams starts the presentation by talking about how amazing the new technology is:

“This revolutionary new energy source is slightly larger than a pinhead, but don’t let its small size fool you.

Can be fully charged in less than five minutes…

And can help power football stadiums, aircraft carriers, and even your entire city… for up to 150 years without being replaced!

He says institutional heavyweights like Vanguard, Fidelity, and Morgan Stanley have invested over $1 billion to bring “Electric Glass” to market and that Jack Ma, Jeff Bezos, Richard Branson, and Bill Gates have also invested heavily.

In addition to that, the Department of Energy wants to deploy electric glass to 8,000 charging stations, countries in the EU want to start using it, and China intends to build five massive power plants that will be powered by electric glass.

Jason says that even with all that money going into the new tech, few people in the general public have an idea of what’s going on.

Before we go any further, I should tell you that Jason Williams is talking about a solid-state battery.

He says that it is going to be the best battery we have developed yet and that it will solve most of our problems with the batteries we use:

“To put it plainly, “Electric Glass” is the most conductive battery ever created.

Its unique chemical composition is virtually resistance-free and allows electricity to flow through it like water.

To top it all off, “Electric Glass” can be fully charged up in just five minutes!

Which means just a few minutes of wind or sunshine could potentially provide enough energy to power a city for weeks — or maybe even months!”

A Solid-State Battery is a battery that uses solid electrodes and a solid electrolyte rather than liquid or gel electrolytes currently found in Lithium-ion or Lithium-polymer batteries.

Solid-state batteries were technically first discovered in the 19th century but research stalled because of a few drawbacks that prevented widespread application. However, there have been a few breakthroughs in recent years and interest has been rising, particularly with the popularization of electric vehicles and renewable energy sources.

One guy who was looking into this was legendary scientist, Dr. John Goodenough. In July 2021, the veteran scientist celebrated his 99th birthday.

Speaking of his credentials, he is a material scientist, solid-state physicist, and Nobel Laureate in Chemistry. His pioneering work was pivotal to the invention of the Random Access Memory (RAM) we use in all computers and the Lithium-ion battery that is used in almost all devices.

In 2017, Goodenough unveiled a solid-state battery that uses a glass electrolyte and a metal anode that is made up of lithium, sodium, and potassium. In 2020, he partnered with a company called EnergyX to help make the solid-state battery dream a reality.

Going back to the presentation, Jason is not the only investment analyst talking about this. Other investment gurus like Matt McCall (Quantum Glass Battery) and Paul Mampilly (The 12 Million Mile Battery) have been talking about new improved batteries with each touting companies that they feel will lead the charge.

Jason Williams is recommending one company that he thinks has the upper hand.

The Tiny Company at the Center of the Electric Glass Revolution

Jason claims that at the center of this solid-state battery revolution is a small company that controls numerous patents for the technology. He goes as far as saying that it could soon become the most valuable energy company, a big claim considering the energy market is dominated by behemoths like ExxonMobil, Shell, Chevron, and Total that are worth at least 200 billion dollars.

He says that investing in this small company before the mass adoption of “Electric Glass” could earn you a massive windfall.

What of the team behind the tiny company?

“The founder was a boy genius and immigrated to America at just 15 years old to study computer science at the University of Maryland.

In 1987, still only 20 years old, he was recruited by Hewlett-Packard to modernize its telecommunications division.

He parlayed his experience there to start his own company that developed software for wireless telecommunication networks in 1992.

Just four years later, he sold it for $65 million.

Immediately after that, he founded a second company…

And developed a way to vastly improve the efficiency of fiber-optic cables by splitting data into different spectrums of light.

This discovery was so revolutionary that he was able to sell this second company for $500 million.”

The co-founder has a Ph.D. in solid-state physics and is one of the leading experts in energy conversion and storage at a nanoscale level. His work has been published in 800 scientific publications.

On the board are two former Tesla executives who helped grow Tesla from a tiny startup to the most valuable company in the motor vehicle industry.

Jason Williams says that this tiny company is preparing to break ground on its first factory that will commercially produce these batteries in large numbers.

He wrote a special report called How To Get in on the Ground Floor of the Multitrillion-Dollar Electric Glass Revolution in which he reveals the company’s name and ticker symbol. 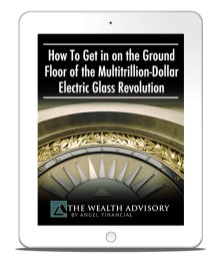 To get a copy of it for free, you have to subscribe to a newsletter Jason William edits that is called The Wealth Advisory.

Who is Jason Williams?

Jason Williams is an American investment analyst who studied finance and economics at the University of Baltimore’s Merrick School of Business. He did his post-graduate work at Harvard Business School.

When he earned a Bachelor of Science degree, he went to work for the US Military where he helped design and analyze complex projects. He developed relationships with soldiers, contractors, and researchers who he says help him keep an eye on developments in Washington DC.

Jason Williams moved on to the private sector where he got a job as an investment banking analyst for Morgan Stanley. He developed connections in the world of finance and learned the lessons that helped him start a family office, where he made his first angel investments.

He left Wall Street and decided to write about investments as a contributor to a publication called Wealth Daily. He now edits two publications, namely The Wealth Advisory and Main Street Ventures. He was also behind Angel Investing Unlocked.

The Wealth Advisory is an investment advisory that Jason Williams edits and publishes via Angel Publishing.

He writes about the opportunities he uncovers after spending days on the phone with CEOs of new exciting startups or talking with venture capitalists. He says that he also travels to manufacturing plants to meet engineers designing new technologies and he talks to the executives of some of the largest companies.

Jason distills the information he gets from all that research into the most hard-hitting investment ideas that he urges readers to get involved with.

He says that so far, the investment recommendations he has shared with his subscribers have been beating the markets for 14 years and counting. 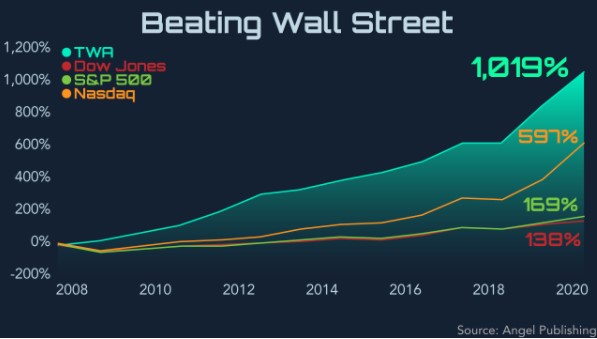 What kinds of stocks does Jason Williams focus on?

He says that he recommends “everything from farming supply companies in the cannabis industry to real estate holding companies.”

What do you get when you sign up for The Wealth Advisory?

12 monthly issues of the newsletter

Each month, you get a new exciting investment opportunity delivered to your email. Jason breaks down everything you need to know about the play, including the ticker symbol, the price, and the exit price.

The newsletter has been around since 2008 thus Jason has published hundreds of reports and newsletters. You get access to all of them on the password-protected website.

Every week, Jason Williams publishes an update where he explains everything that happened in the past seven days. These updates are designed to help you respond to shifting market conditions as they happen.

You get a copy of a report about a tiny “tollbooth” company that happens to own the most extensive fiber-optic cable network in the country. That’s more than AT&T, Verizon, and all its other competitors combined.

The connection with 5G comes in because Jason argues that if anyone wants to use 5G, they’re going to have to pay this company to gain access to its network.

Jason says that it is a guide filled with tips and tricks you can use to pad your retirement. This includes things like how to earn $4,898 in internet royalties every month, a little-known 12% savings account, how to get paid to golf, a blueprint to becoming a fine art or antique dealer, and how to earn $7,000 a month on the internet.

How much is the Subscription Price of The Wealth Advisory?

The Wealth Advisory has a 180-day money-back guarantee. This means that you have 6 months to try it out. 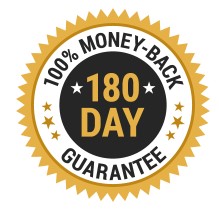 Jason says that if you decide to terminate your membership, all you have to do is give their member services team a call or email, and they’ll refund every single penny you pay for the subscription.

Jason Williams says that what we are about to see with the introduction of “Electric Glass” (solid-state batteries) to the energy industry is something that has occurred few times in history in terms of the impact it will have. He believes that it is on par with the invention of the steam engine, the discovery of oil, and the splitting of the atom – events that marked important advances in human technological progress.

To add to that, he says that the “smart money” (referring to billionaires and major institutions) has already invested heavily in the technology.

Jason Williams wants you to join his advisory service called The Wealth Advisory where he shares investment recommendations such as this one that he teases in the presentation. Before you sign up, you should do more research beyond what he tells his audience in the pitch because what he shares here is purely to make himself look good.

Should you invest in solid-state battery companies?

I think that you ought to decide that on your own. All I can say is that it is still a nascent technology that will take years to come to market. That shouldn’t stop you from investing but it is worth consideration.